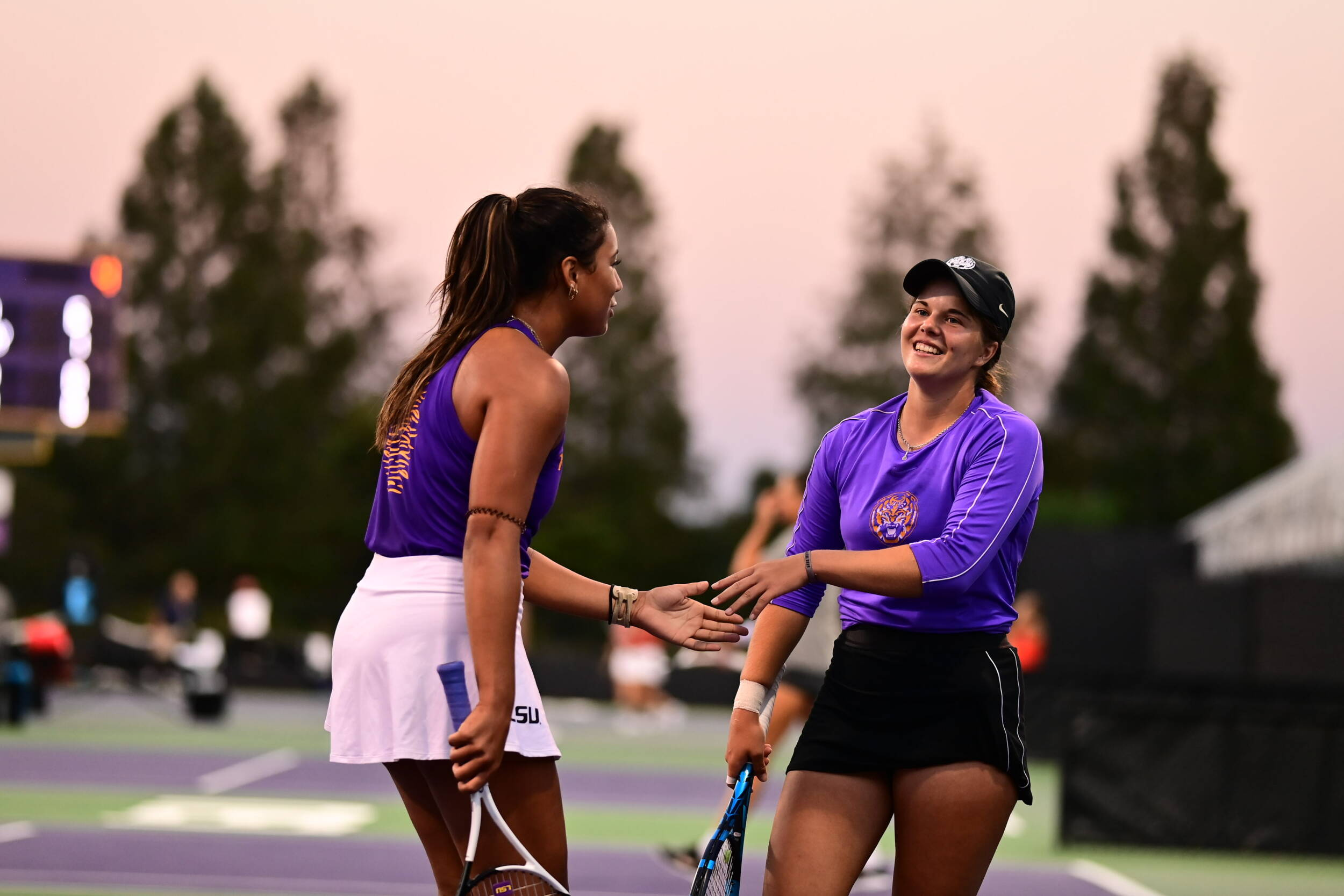 BATON ROUGE, La. – The LSU women’s tennis team grabbed four wins in singles play and three in doubles on the second day of the 2022 ITA Women’s Southern Regional on Friday at the LSU Tennis Complex.

Singles Results – Round of 64
The Tigers opened play in the main draw’s round of 64 to start things off. Redshirt freshman Anastasiya Komar took on Auburn’s Anastasia Astakova. Komar played a dominant match of tennis, opening the match with a 6-1 win before repeating the scoreline in the second to advance rounds.

At the next court over, senior Maggie Cubitt took on SEC opposition in the form of Alabama’s Ola Pitak. The Crimson Tide player jumped to an early lead and blanked Cubitt, 6-0. The second set saw the LSU Tiger turn the tide in the second set as she won 6-4 and forced a third set. Cubitt carried momentum and coasted to a 6-2 win in the third to move on to the next round.

LSU’s third win of the day came from senior Safiya Carrington, who defeated Polina Ramenskaja of Jacksonville State in straight sets. Carrington only dropped one game in the first set, 6-1, before winning the second by a margin of 6-3 to advance to the round of 32.

Freshman Noor Carrington drew Mississippi State’s Alexandra Mikhailuk in her match. Mikhailuk held Carrington off in the first set by a score of 6-3 and went on to win the second set, 6-2, to move to the next round.

Freshman Nikita Vishwase grabbed the first singles win of her collegiate career as she took down Sofia Garcia of Northwestern State in straight sets. Vishwase opened the match strong and took an early lead en route to a 6-2 win. The freshman repeated the scoreline in the second and punched her ticket to the following round.

The adjacent court had senior Nina Geissler facing SEC foe Kelsey Mize of Ole Miss. Mize claimed the first set by a score of 6-3 before Geissler equalized with a 6-3 win of her own in the second. The third set saw Mize recover and down Geissler, 6-2, to advance to the next round.

LSU’s final singles match of the day had graduate student Mia Rabinowitz take on UAB’s Maggie White. The two played an even first set and were split 6-6 after 12 games. The tiebreaker went to Rabinowitz, who narrowly edged White, 8-6. White charged back in the second set with a 6-3 win and held off the Tiger in the third as she won 6-4 and booked her place in the round of 32.

Doubles Results – Round of 32
Three Tiger duos started their campaign in the round of 32. The senior tandem of Carrington and Geissler opened doubles play with a strong 8-4 win over Louisiana Tech’s Alexia Romero and Ilana Tetruashvili.

The freshman pair of Komar and Vishwase completed LSU’s perfect day in doubles as they only dropped one game in an 8-1 win over Troy’s Olivia Elliott and Andrea Widing.

Up Next
Day Three of the ITA Southern Regional starts at 9 a.m. CT tomorrow at the LSU Tennis Complex. One round of doubles will open the day before the Rounds of 32 and 16 in singles begin immediately after.