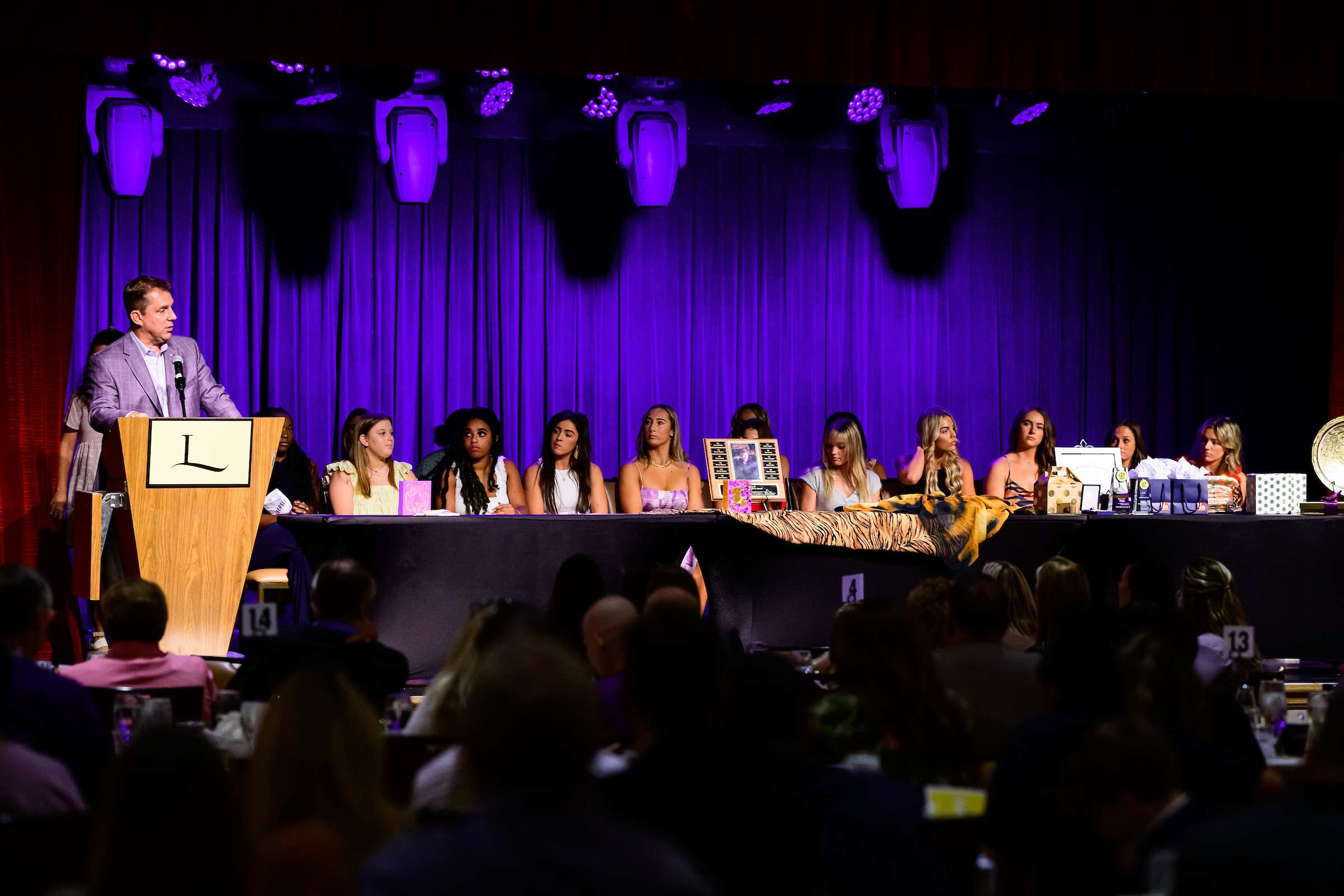 Head coach Jay Clark and assistant coaches Ashleigh Gnat, Garrett Griffeth, and Courtney McCool-Griffeth presented the athletes with various awards recognizing their efforts in the classroom, in the arena, and in the community.

The program welcomed staff, family, friends, and boosters to recognize all of the accomplishments from 2022 as well as introduce the newcomers for the 2023 season.

The banquet began with the presentation of letter winners and the introduction of the four newcomers. Lettering at LSU honors the athletes for their hard work and dedication. There was a total of 20 letter winners from the 2022 season.

Cammy Hall, Annie Beard, Ashley Cowan, and Bryce Wilson were recognized as the four newcomers for the upcoming season.

The awards portion of the program began with senior honors. Rebecca D’Antonio, Reagan Campbell, Bridget Dean, Christina Desiderio, Sami Durante, and Sarah Edwards were welcomed back and awarded for their accomplishments throughout their years at LSU.

The scholar athlete of the year was presented to Rebecca D’Antonio for her academic leadership and performance in the classroom.

The next portion of the banquet recognized the student-athletes performances in the arena. McCool-Griffeth presented the Dee-Dee Fulmer award. Dee-Dee was an advocate for women’s athletics at LSU and a fervent supporter of the program. This award honors a gymnast who demonstrates a strong commitment to academic and athletic excellence. Haleigh Bryant was honored with the award, which represents Fulmer’s spirit and drive.

Leighann Westfall presented the L-Club Captain Award, presented by the National L-Club to Christina Desiderio and Kiya Johnson for their leadership and commitment to team excellence.

Serving Baton Rouge and the surrounding community is something that is important to the program. Sami Durante was awarded the SEC Community Service Award.

LSU had two All-SEC performers in 2022. Haleigh Bryant and KJ Jonson earned All-SEC honors for finishing in the top two scores on an event at the SEC Championships. Bryant finished second on beam with a score of 9.95, while Johnson finished as the top freshman on vault with a 9.90.

2022 also saw three NCAA All-Americans. Bryant, Durante, and Kiya Johnson continued the streak of excellence on the competition floor and raised the program’s total number of All-Americans to 261. Bryant received All-American honors on vault and uneven bars, Durante on uneven bars, and Johnson on vault.

Griffeth presented KJ Johnson with the Newcomer of the Year Award, awarded to the freshman who came in and made an impact on the competition floor.

Griffeth also presented the Returner of the Year Award to Haleigh Bryant, who utilized her down-time throughout the summer to ensure she was in the best place to compete and had a remarkable sophomore year, earning three perfect scores on vault.

Gnat presented the first annual consistency award to Bridget Dean, who demonstrated consistency in training and in competition year-round.

The final award of the day was presented by the coaching staff to Kiya Johnson, the MVP of the 2022 season. The MVP award recognizes the person who puts the most points on the board and contributes the most from a competitive standpoint.

Newcomer of the Year – KJ Johnson

Returner of the Year – Haleigh Bryant