Baton Rouge's Universities - LSU and Southern - met on the gridiron for the first time in front of a festive crowd on Saturday night in Tiger Stadium. 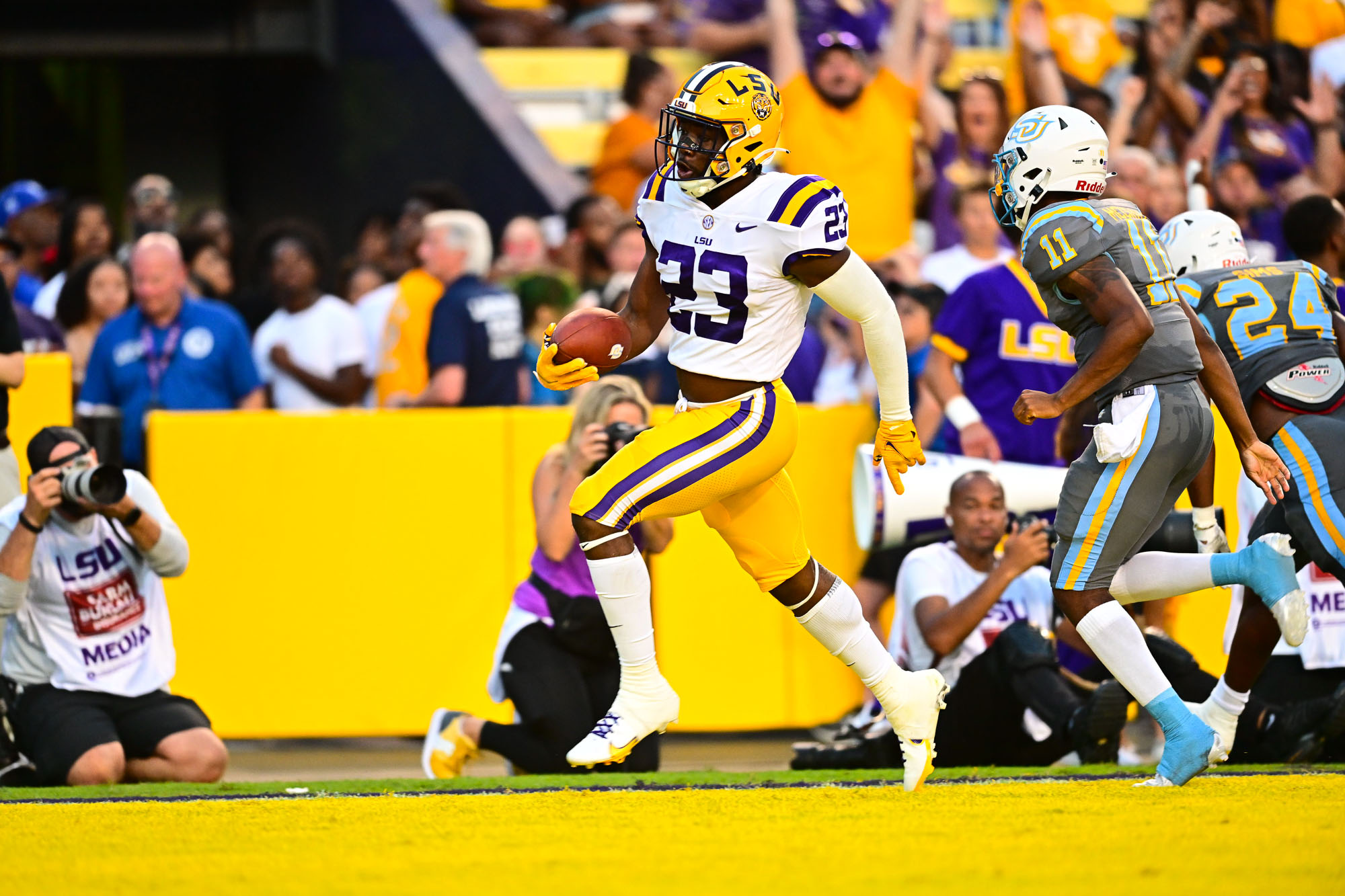 BATON ROUGE — LSU quarterback Jayden Daniels went 10-for-11 for 137 yards and three touchdowns in just over a quarter of play on Saturday night to lead the Tigers to a commanding 65-17 win over Southern in Tiger Stadium.

LSU improved to 1-1 with the victory, while Southern dropped to 1-1 on the year. The Tigers return to Death Valley next Saturday to start conference play by playing host to Mississippi State at 5 p.m. CT on ESPN.

The Jaguars’ Reginald King fumbled the opening kickoff of the game, as LSU’s Zavier Carter forced the miscue and Sage Ryan recovered the ball at the Southern 21. LSU capitalized on the turnover, as on the Tigers’ third play from scrimmage, Daniels dashed 18 yards to the end zone.

After the LSU defense forced a three-and-out on Southern’s first offensive possession, the Tigers moved 62 yards on four plays and increased the lead to 14-0 on a five-yard scoring run by Josh Williams. The drive was highlighted by Armoni Goodwin’s 38-yard burst to the Jaguars’ five-yard line.

On its next possession, LSU marched 71 yards on five plays and scored on Daniels’ 17-yard TD strike to wide receiver Jack Bech, giving the Tigers a 21-0 lead at the 7:16 mark of the first quarter. The drive featured a 41-yard sprint by wide receiver Kayshon Boutte on an end-around

LSU linebacker Micah Baskerville intercepted Southern quarterback BeSean McCray’s pass on the next play from scrimmage, and Baskerville raced 29 yards to paydirt, increasing the Tigers’ advantage to 28-0 with 7:07 remaining in the opening period.

Baskerville made his presence felt again when he blocked a Southern punt, and the football skipped through the end zone for a safety with 1:31 left in the first quarter. The play marked LSU’s first safety since November 30, 2019, when Neil Farrell Jr. sacked Texas A&M’s James Foster, and the ball was recovered by the Aggies in their own end zone.

Baskerville’s play was LSU’s first blocked punt for a safety since October 16, 1999, at Kentucky, when Jarvis Green blocked a punt out of the back of the end zone.

LSU’s 37 points in the first quarter marked the most points in a single period in school history. The previous mark was 35 points, set in the third quarter versus Rice in 1977 and in the fourth quarter at Tulane in 1958.

The Tigers boosted the margin to 44-0 early in the second period when Daniels hit wide receiver Brian Thomas Jr. with a 44-yard TD pass, culminating a five-play, 65-yard possession.

LSU reserve quarterback Garrett Nussmeier engineered a six-play, 80-yard touchdown drive late in the second period, as running back Noah Cain capped the march with a two-yard surge across the goal line. A 60-yard pass from Nussmeier to Nabers that advanced the ball to the Southern 20 highlighted the possession.

The Tigers’ 51 first-half points marked their third-most in a single half in school annals. LSU scored 56 points in the second half at Tulane in 1958 and 52 points in the first half versus UL Lafayette in 1936.

Goodwin’s two-yard TD run gave the Tigers a 58-0 lead with 8:42 remaining in the third period and completed an eight-play, 59-yard drive. The score marked the first time LSU had four different players rush for a touchdown since September 14, 2019, when Clyde Edwards-Helaire, Joe Burrow, John Emery Jr. and Tyrion Davis-Price each rushed for six points versus Northwestern State.

After Ryan made his second fumble recovery of the game at the Southern 41, the Tigers moved to the Jaguars’ six-yard line, but Nussmeier’s pass was intercepted by defensive back Benny McCray and returned 94 yards for a touchdown.

Goodwin scored his second rushing touchdown of the night on a 1-yard dive with 14:01 left in the game, finishing a 10-play, 75-yard march and increasing the margin to 65-7.

Southern’s offense reached the end zone for the first time with 8:15 left in the contest when Karl Ligon bulldozed across the goal line from the 1, capping a 78-yard, 11-play drive.