Eason Bio The Ultimate Winner Tigers in the NBA Draft +0 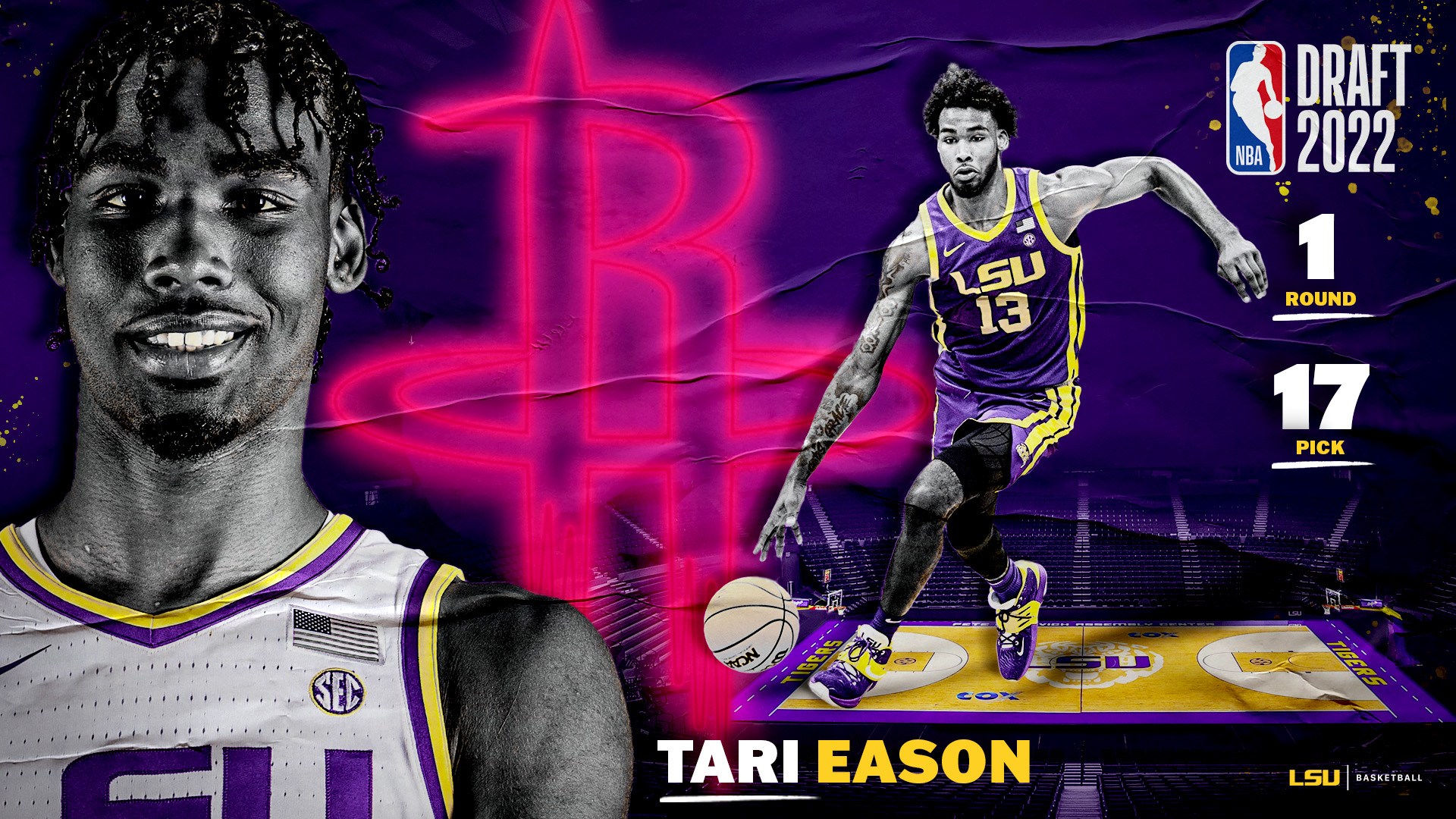 BATON ROUGE – LSU forward Tari Eason, the Southeastern Conference’s Sixth Man of the Year, was selected Thursday in the first round of the 2022 NBA Draft, held at the Barclay’s Center in Brooklyn, New York.

Eason, the 17th all-time LSU player to be selected in the first round and the second consecutive year LSU has had a first-round selection, was the number 17 selection in the opening round to the Houston Rockets.

Eason had a breakout 2021-22 season at LSU after transferring from Cincinnati, where he played as a freshman. A first-team All-SEC selection and an AP Honorable Mention All-America selection, Eason averaged 16.9 point, 6.6 rebounds, 1.0 assists, 1.1 blocks and 1.9 steals a game while playing 24.4 minutes per game.

Eason scored in double figures in 29 games for the Tigers with 11 games of 20 points or more and seven double doubles. He was named a semifinalist for the Naismith Defensive Player of the Year award and finished sixth in the SEC in scoring, ninth in rebounds, T4 in steals and ninth in offensive rebound average (2.27).

In the media room at the NBA Draft, here is the transcript from Tari Eason:

Q. What are you going to bring to the Rockets, knowing that they are a young team?

TARI EASON: I think I’m just going to bring a defensive versatility and a competitive edge and just a winning mindset to the team.

Q. During the Combine, you spoke about a confidence about you being able to guard one through five. Where does that confidence come from? Because we saw it on display, not just in the words you were saying. Was it LSU or before that?

Q. Whether personal goal or a goal you want to strive for with your team, what are you looking to achieve at the NBA level?

On the support from his mom…

“This is so special. My mom and I have been through so much together. She has been in my corner since day one. She has pushed me. She has made me the man I am today and I am forever and eternally grateful to her. “

On a skill he will add to the Rockets…

“My versality and my competitive spirit. I will be out there doing whatever I can to win.”

ESPN College Basketball analyst Jay Bilas said of Eason on the draft telecast: “He’s a transition wing with a 7-1 wingspan. Very athletic. He’s a defender, a rebounder — especially an offensive rebounder — he averaged two-and-a-half offensive rebounds per game. He has a ton of value. He came off the bench. He was a sixth man … He never complained. He didn’t demand to be a starter. He’s a team guy. He can stretch it out and shoot it; 36 percent from three and an 80 percent free throw shooter and top five in college basketball in player efficiency rating in just over 33.”

There will be more updates to the story as the NBA Draft continues.