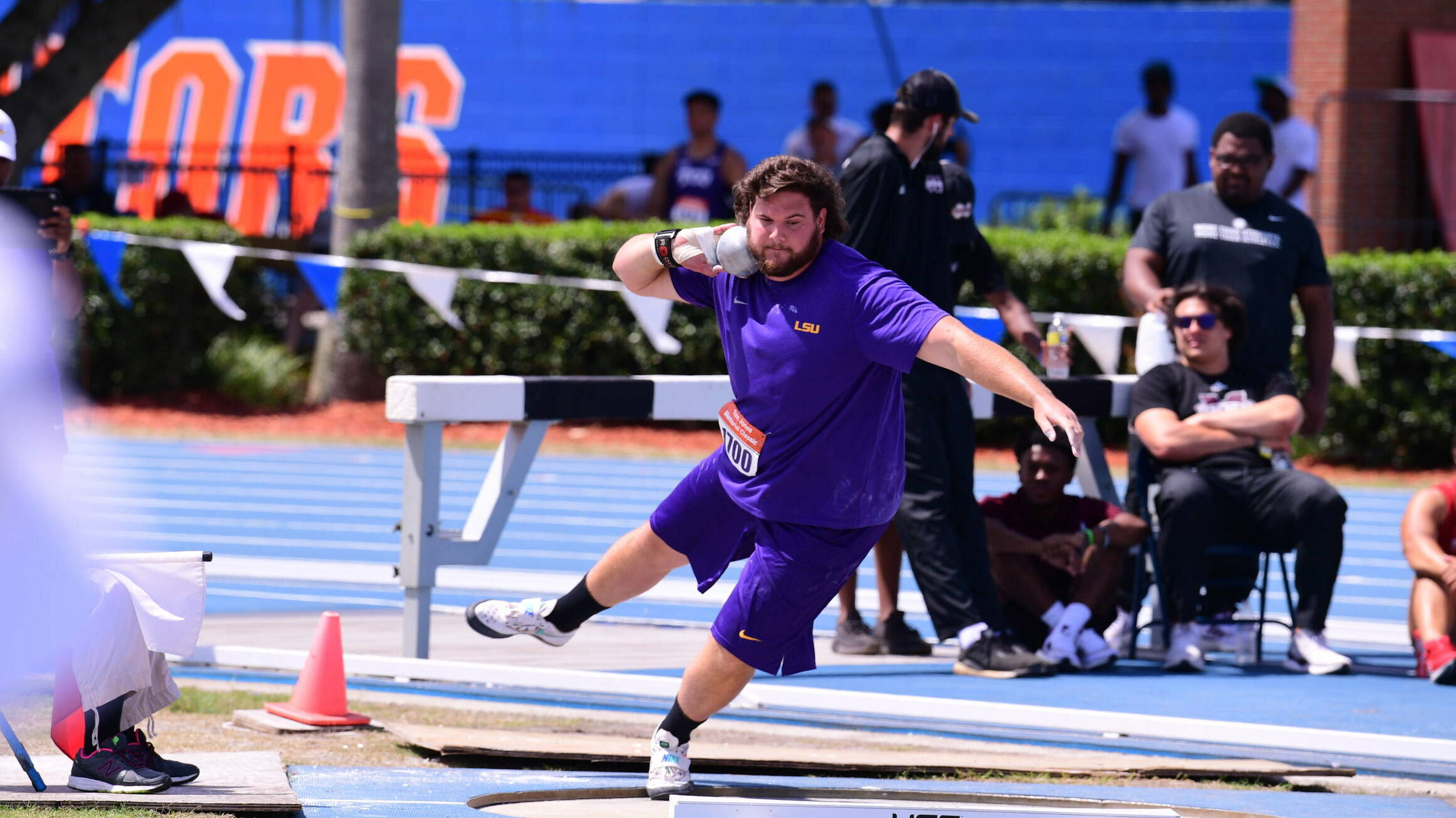 Gainesville, Fla. –  Sophomore John Meyer is officially the top thrower in LSU history when you look at the all-time school record book. He set the indoor record back at the NCAA Indoor Championships, and then he launched a lifetime best throw of 67’ 3.25” (20.50 meters) today at the Tom Jones Memorial to cement his mark on the LSU record book.

Meyer’s lifetime best heave came on his second attempt of the day, and it helped him win the event by nearly six feet. It moves him up into the No. 3 spot in the NCAA this season, and it broke Joe Macieczyk’s prior LSU best of 65’ 7” from all the way back in 1982.

In the hurdles, LSU had a pair of second-place finishers. Alia Armstrong ran a career best wind legal time of 12.61 seconds in the 100 meter hurdles to scoop up silver. That mark bettered her previous second best mark in LSU history, and it moved her up to the No. 13 spot on the all-time collegiate list. Armstrong also now ranks No. 3 on the world list for 2022 in the 100 meter hurdles with her wind legal 12.61. Eric Edwards Jr. finished second as well with a season best wind legal mark of 13.50 seconds.

Godson Oghenebrume, only a freshman, showed continuing promise as he unleashed a lifetime best of 10.12 seconds in the 100 meter dash to finish fifth in a loaded field. The time of 10.12 ranks third on the world list for 2022 on the under-20 circuit, and it ranks No. 7 on the NCAA list this year. It’s also the sixth fastest wind legal time in LSU history in the 100 meter dash.

In the women’s high jump, Nyagoa Bayak and Morgan Smalls both cleared matching bars of 6’ (1.83 meters). Due to fewer misses, Bayak finished fourth and Smalls followed in fifth place. Sean Dixon-Bodie was the third highest collegiate finisher in the triple jump as he recorded a mark of 51’ 6.50” (15.71 meters) on his fourth attempt of the day.

The women’s 4×100 meter relay of Alia Armstrong, Thelma Davies, Symone Mason, and Favour Ofili ran a 43.18 to secure bronze in the event; it was the first time that this lineup ran together this year. Thelma Davies (11.38) and Symone Mason (11.46) both ran season bests in the 100 meter dash to finish eighth and ninth, respectively. Those times are NCAA East Preliminary qualifiers for sure.

The women’s 4×400 meter relay of Favour Ofili, Amber Anning, Symone Mason, and Garriel White combined to clock a time of 3:30.52 to finish at the fastest collegiate team in the event earning them a second place finish overall.