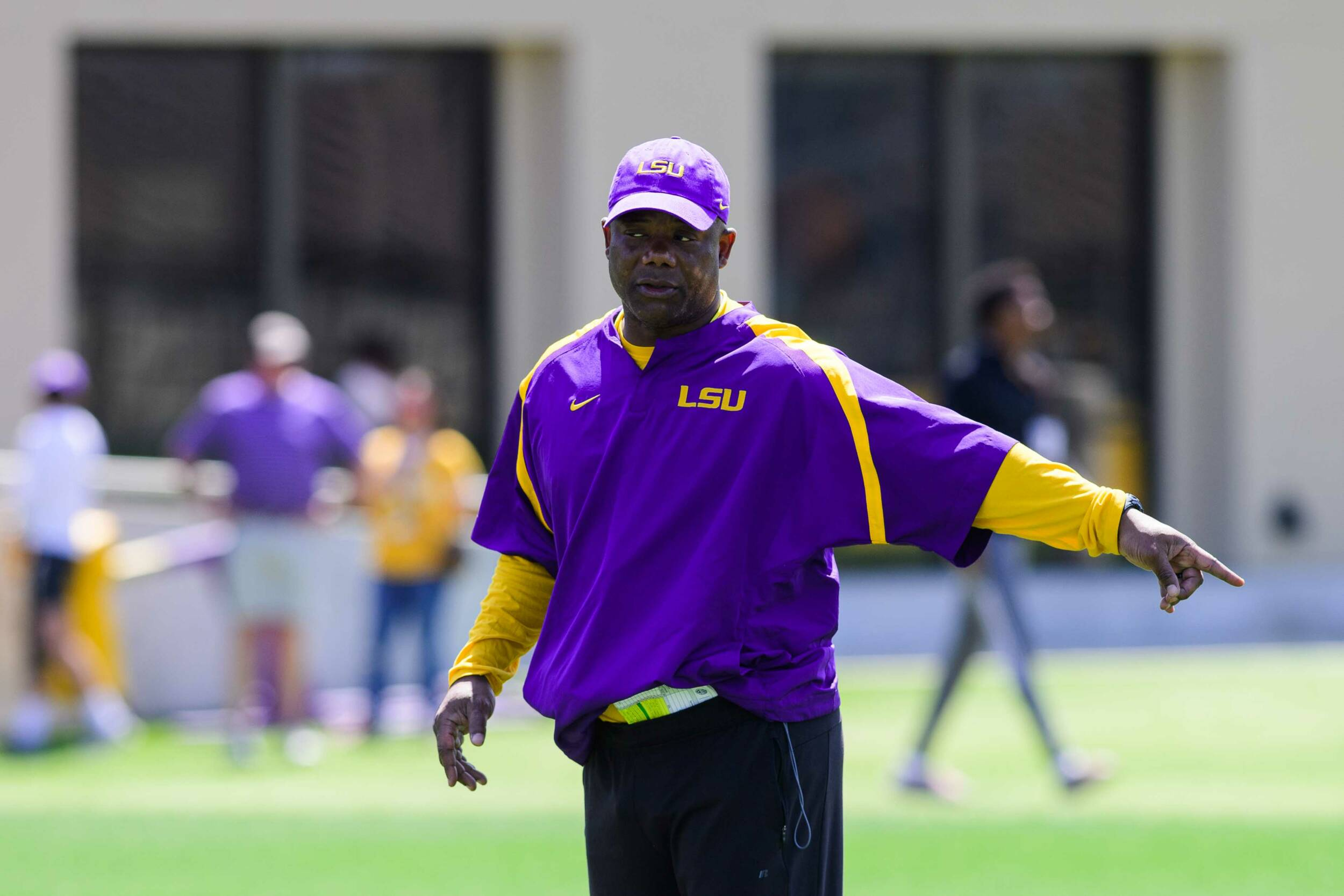 Associate head coach and running backs coach Frank Wilson is back at LSU and sat down with Emily Dixon in an exclusive Q&A session. Wilson talked about the thought process behind his return to Baton Rouge, working alongside Coach Brian Kelly, what he learned from being a head coach, and more.

Emily Dixon: Welcome back to LSU. Coach Frank, what went into your decision that this was the right time to come back?

Frank Wilson: Brian Kelly gave me a call. It was one that was very interesting. The more I talked to him, the more I realized that he was a guy that had a plan in place. A guy that I could continue my professional growth with at a place that I love being at. LSU has always been special to me. I stepped away to chase opportunity, to be a head coach and enjoyed every moment of it. But, mother, University called you to come home and it was one that I could not turn down or refute. I thought it was the right time to do so.

ED: You’ve seen LSU football at a lot of different stages of this program, more than some others that are on staff. How would you describe the culture and team that Brian Kelly wants to build here?

FW: I think it’s indicative of who he is: a guy that understands that traits trump everything. That habits are exactly what you’ll get from a player, from a team, and what they do on a day-to-day basis. So the process in going about building our program, and the culture that he desires is one that will reflect itself, not just on the football field, but in the classroom and overall in life, and one that’s been very rewarding for the teams that he’s coached over the years.

ED: One of your strengths as a college coach is recruiting. What kind of difference does it feel now that you once again have those three letters across your chest and get to walk into these high schools in the purple and gold representing the Tigers?

FW: I was just talking to our recruiting staff, recruiting has never changed in the sense of it’s about people. It’s about being a good listener, it’s about giving a blueprint to help someone’s dream become a reality. But it’s also changed in some ways. From that relationship building over time, interaction. In a world that now includes this thing called NIL. There are more parties involved than what was in the past where you dealt with the high school coach, you dealt with parent and student-athlete, they’re more people involved now. That’s different for me. We live, we thrive in a people society. Those relationships in the past have withstood all the other stuff that’s out there. I think there’s still some merit to that. But there’s some other parts in it involved now that weren’t in years past. We’ll see how it rolls through. A lot of things that we’ve done, we continue to do in the genuineness of student-athlete and family that’s inclusive of the high school coaches. I think that is the core of it. You still have to abide by it. We’re adjusting to the other things that happen with it as well.

ED: How important is the state of Louisiana to this program as a whole?

FW: I think it’s very important. You look at study, you look at success. When we’ve had the best players in this state stay at LSU, we’ve been at our very best. History shows that. I think there’s always going to be, and will always be a national brand that LSU has about itself, that allows you to extend outside the borders of Louisiana into regional and then national areas as well. But I do believe the core and the foundation starts here. I do believe that you have to extend and can extend way beyond Louisiana all the way to Australia and other places as well. That’s something I believe that Coach Kelly wants to continue to do and will do so. It’s important for him, for us, to be able to do well in the state of Louisiana. You look at it per capita in the National Football League, you look at guys who may not be as heralded in high school, with star accolades, but it just means something different for them when they go in Death Valley. They play a little harder, they strain a little harder. Outcome favors, a lot of times, that kid who’s a hometown young man who always wanted to play at LSU. Like our guy Tyrann Mathieu.

ED: When working with the running backs this spring, what are some of the main things you want to accomplish with your group?

FW: Being a student of the game. It’s been a big deal. We’ve been very fortunate that yesterday, Clyde [Edwards-Helaire] spoke to the backs. Last week, Jeremy Hill spoke to the backs. Leonard Fournette spoke with the backs. Next week we’ll have Jacob Hester. I just like them to understand where we’re trying to go and to understand that you need to understand where we come from. The history, that when you look at College Football Hall of Fame, when you look at Heisman, when you look at all the accolades that have been accumulated by the great players from here, a lot of it started in that running back room, and pridefully. We called ourselves RBU before we were ever DBU, which we are. But we’ve had a lot of great running backs, from Billy Cannon on, you know, years and years to Dalton here used to Kevin Fox, I mean, you go on and on, we’ve, we’ve had a lot of great ones, and we were and then we still are, or B. And so we pride ourselves in that. And those players come back to give their testimony, to share what it took to be that and understanding that the standard is the standard without negotiation, and the work is the work. And to hear that echoed from those former players is a big deal for him.

ED: You have some natural connections with a handful of guys on the team. But there are a lot of new faces this year. What is your approach when it comes to building a relationship with a whole new group of guys?

FW: So for players, it’s a beautiful thing, because they get to know you. Even if they’ve heard about you, they don’t know you. To get them in classroom settings, to get them in social settings, to wrap your arm around them. The best thing that could have ever happened coming back, is to have our I call it a restaurant, and then a training table or a certain amount of cash because it’s not that with those chefs back there, to be able to eat meals with our team and to fellowship with the men. And they get to know you outside of the coach, but as a person, as a husband, as a father as a man. Those are valuable, priceless opportunities that we’re able to garner with our student-athletes because it’s connected to our building. So plan and what’s being done with that connection with our training table has been a beautiful thing and allows us to form those relationships over meals.

ED: If I went back and pulled some of those guys you were just talking about that played for you or any of your former players, how do you think they would describe you as a coach?

FW: Demanding? Yeah, demanding. If I had one adjective, I’d say demanding.

ED: Cortez said the exact same thing. You’ve been a part of an SEC championship team while here at LSU in 2011. So what’s it been like getting to know the other coaches on the offensive staff as you come together to build going towards that goal and even more success?

FW: It’s been awesome. Over the years, you broaden your horizon. You learn and appreciate there’s more than one way to do things. There’s great appreciation in that. In this profession, we go about our business and you’re trained and taught a certain way. Then you see the way things were done in other places and it puts things in perspective, that there’s a myriad of ways, there’s a variety of ways that you can get things accomplished. There’s appreciation that comes with that. I think we have an outstanding football staff, offense, defense and special teams, a great group of men, that I enjoy being around on a daily basis and learning from.

ED: What did you learn as a head coach that you take into this associate head coach role?

FW: Even more so now than ever, everybody’s voice matters. To lend your ear to the guy who’s the student worker, the guy who’s the graduate assistant, the guy who is the analyst, and certainly that of the position coaches and coordinators, but that we can all learn from one another and that everybody’s experiences are different. And not only that but to empower those people to have a voice to talk. Old school it was when you were a GA, you don’t talk you just sit there, and now to encourage those guys to have a voice that matters because it could be helpful to us.

ED: Lastly, what does Frank Wilson do when he’s not coaching football and now that you return as a grandpa?

FW: We have practice days, and we’re here then. But whenever I get time, I have two beautiful grandkids that I spend most of my time with. They would have it no other way, even if intentions are not to go. It’s playtime, it’s jumping on a trampoline, it’s soccer ball, as they call it. It’s just doing fun things to reunite myself with Chuck E. Cheese and all of those places. So, most of the times are done with my babies and hanging out with them or with family. So family time — a greater appreciation now for family time, because outside of all that, that’s what’s most important.