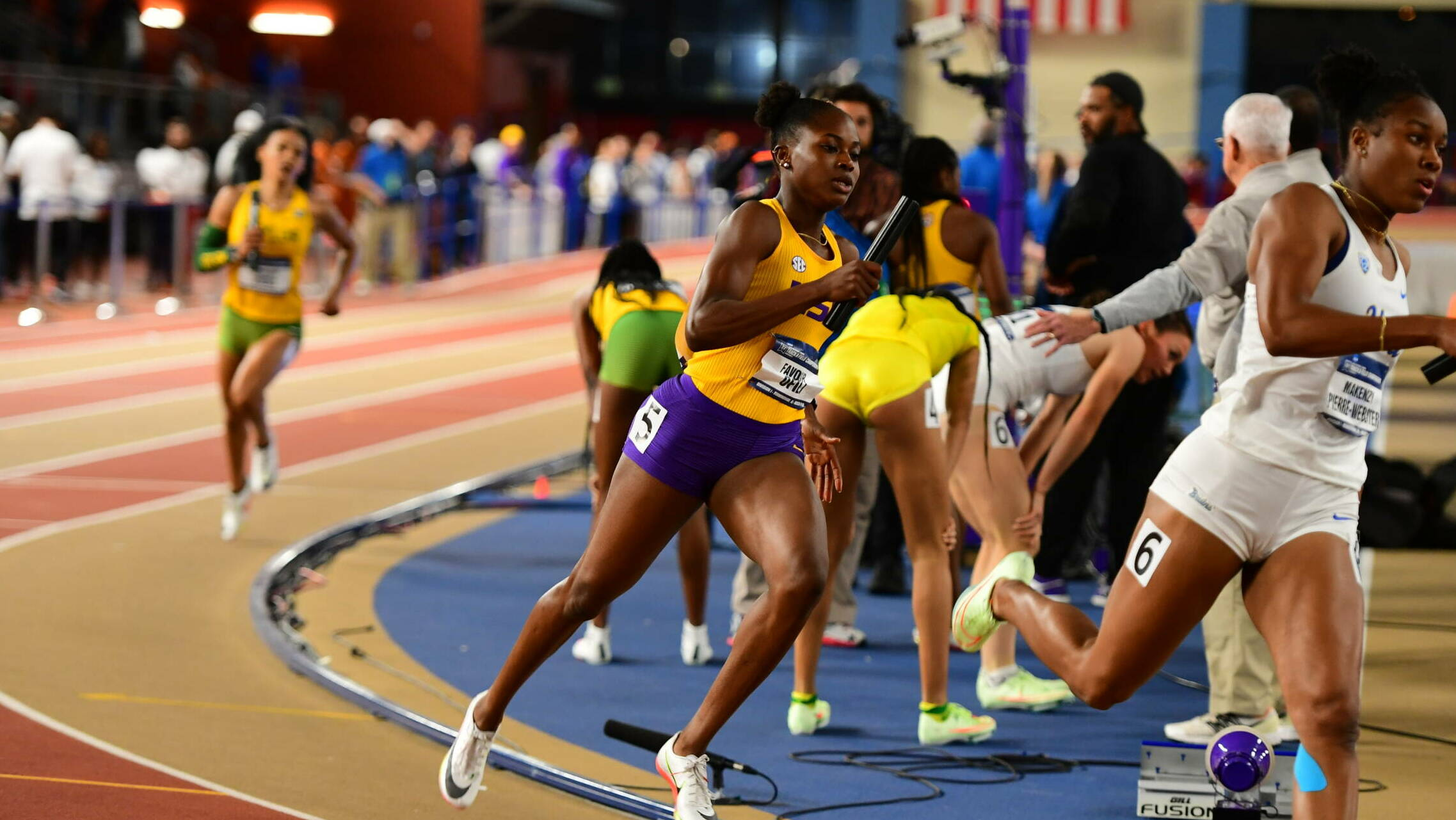 Birmingham, Ala. –  The LSU women earned a fifth place finish on Saturday night at the NCAA Indoor Track & Field Championships that was hosted at the Birmingham CrossPlex. The Tigers scored 29.5 points at the meet for the fifth place finish. It’s the eighth top-five finish indoors for the LSU women under head coach Dennis Shaver.

The LSU women tallied 25.5 points on the final day of competition to bring the total to 29.5 after Lisa Gunnarsson scored four points on Friday night.

Nyagoa Bayak and Abigail O’Donoghue got the day started by scoring 8.5 points for the Tigers in the high jump. Bayak cleared a personal best height of 6’ 1.25” (1.86 meters) on her third and final attempt at the height to secure a fourth place showing. She was one of four women remaining in the competition when the bar went to 6’ 2.25” (1.89 meters), but she was unable to clear that bar. It’s the third career First Team All-America honor for Bayak, and it moved her into a three-way time on the all-time LSU list at the No. 3 spot. O’Donoghue finished tied for fifth with a height of 6’ (1.83 meters); it was her fifth career First Team All-America honor.

Favour Ofili scored in three events for the Tigers on the final day of action with quality performances in the 60 meters, 200 meters, and 4×400 meter relay. Her first scoring effort of the day was a time of 7.25 seconds in the 60 meter dash to place seventh. She returned to the track 40 minutes later and dropped a time of 22.50 in the 200 meter dash to earn her first career individual NCAA medal as she took second in the event. She closed out her night by anchoring the LSU 4×400 meter relay to a seventh place finish with a time of 3:31.81. All in all, Ofili tallied 10.5 points for the Tigers. She was joined on the 4×400 meter relay by leadoff leg Amber Anning, second leg, Michaela Rose, and third leg Garriel White.

The LSU men finished in a three-way tie for 24th with nine team points. The Tigers received scoring performances from John Meyer (shot put), Apalos Edwards (triple jump), and Eric Edwards Jr. (60m hurdles). Meyer set the school record with a third round heave of 66’ 4.25” (20.22 meters) to earn a fifth place finish; he broke Joe Macieczyk’s previous school record of 66’ 0.25” (20.12 meters) that was set in 1981.

Edwards earned the first All-America honor of his young career by taking fifth in the triple jump with a personal best mark of 53’ 2.25” (16.21 meters) on his second attempt of the night. Fellow triple jumper Sean Dixon-Bodie placed 10th in the event with a mark of 51’ 6.25” (15.70 meters).

LSU’s final point scorer of the meet on the men’s side was Edwards Jr. in the 60 meter hurdles. He shot out of the blocks with a lead after clearing the first two hurdles before he clipped the fourth one and it threw him off balance. He tumbled through the finish line with a time of 8.24 to place eighth.

Indoor season is a wrap. Outdoor season starts now. The Tigers will head to Tempe, Arizona, for the Baldy Castillo Invitational March 18-19.