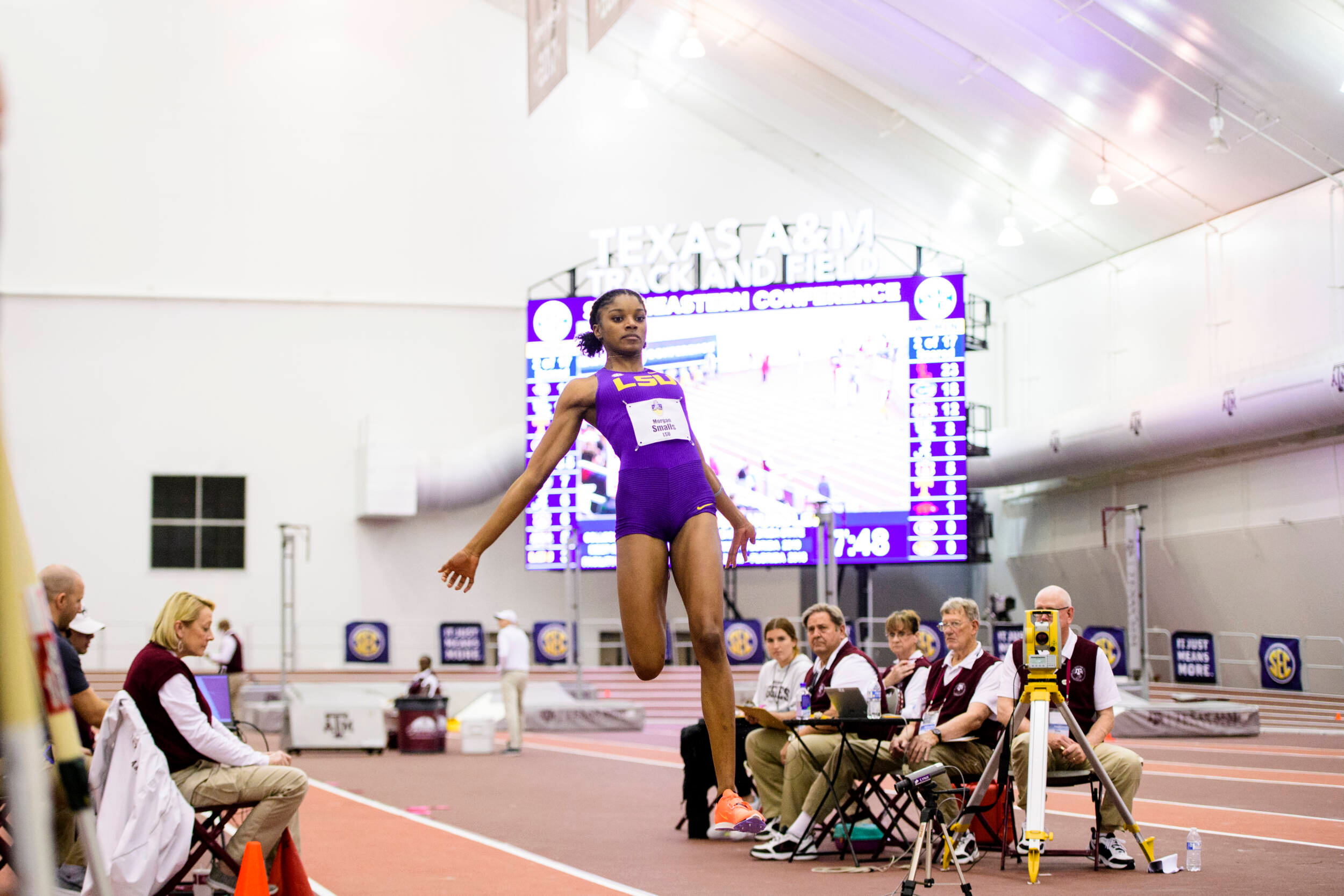 Bryan-College Station, Texas –  The LSU track and field team scored points in six different events on Friday night at the Gilliam Indoor Stadium to highlight day one of action at the SEC Indoor Championships. The Tigers also had 12 athletes advance out of the preliminary rounds to Saturday’s finals.

After one day of action, both the LSU men and women are in 10th place, but both squads are poised to score some points on Saturday to improve their positioning. The women have a total of 17 scoring opportunities on Saturday, while the men have eight.

Jon Nerdal chipped in with two points in the weight throw as he took seventh with a best throw of 67’ 2.75” (20.49 meters). The final two scoring performances of the night for LSU came in the distance medley relays. The men’s foursome of Davis Bove, Aaron Smith, Dyllon Nimmers, and Eric Coston ran the eighth fastest time in LSU history, a 9:45.39, to place sixth in the event. The women’s crew of Sara Funderburk, Garriel White, Hannah Carroll, and Alicia Stamey placed eighth with a time of 11:23.65 to score a point.

Although they weren’t point scoring performances, Addison Stevenson and Jackson Martingayle threw down some pretty impressive personal bests in the 5,000 meter run. Stevenson, in her first collegiate 5,000 meter run, clocked a time of 16:47.23 to become the third fastest performer in LSU history; she finished 16th in the event. Martingayle moved into the No. 9 slot on the LSU list with a personal best time of 14:30.17 to finish 13th in the event.

Other than that, it was strictly qualifying for the Tigers as they moved on numerous runners to Saturday’s finals. Favour Ofili, Leah Phillips, Alia Armstrong, and Dorian Camel all qualified for two events apiece.

Ofili ran quite fast in the prelims with a personal best of 22.61 in the 200 meters to better her own previous African indoor record in the event; it moved her up to No. 3 in both the LSU record book and the NCAA rankings this season. She owns the fastest three times in African history indoors over the 200 meter distance with times of 22.61, 22.71, and 22.75. She also advanced on to the finals of the 60 meters with a 7.21.

The second and final day of the SEC Championships will take place Saturday. There will be two separate live streams where fans can watch the action; those links are below. Action gets started for LSU at 1:15 p.m. CT on Saturday with four Tigers – Ronnie Rounds, Abigail O’Donoghue, Morgan Smalls, Nyagoa Bayak – in action in the high jump.