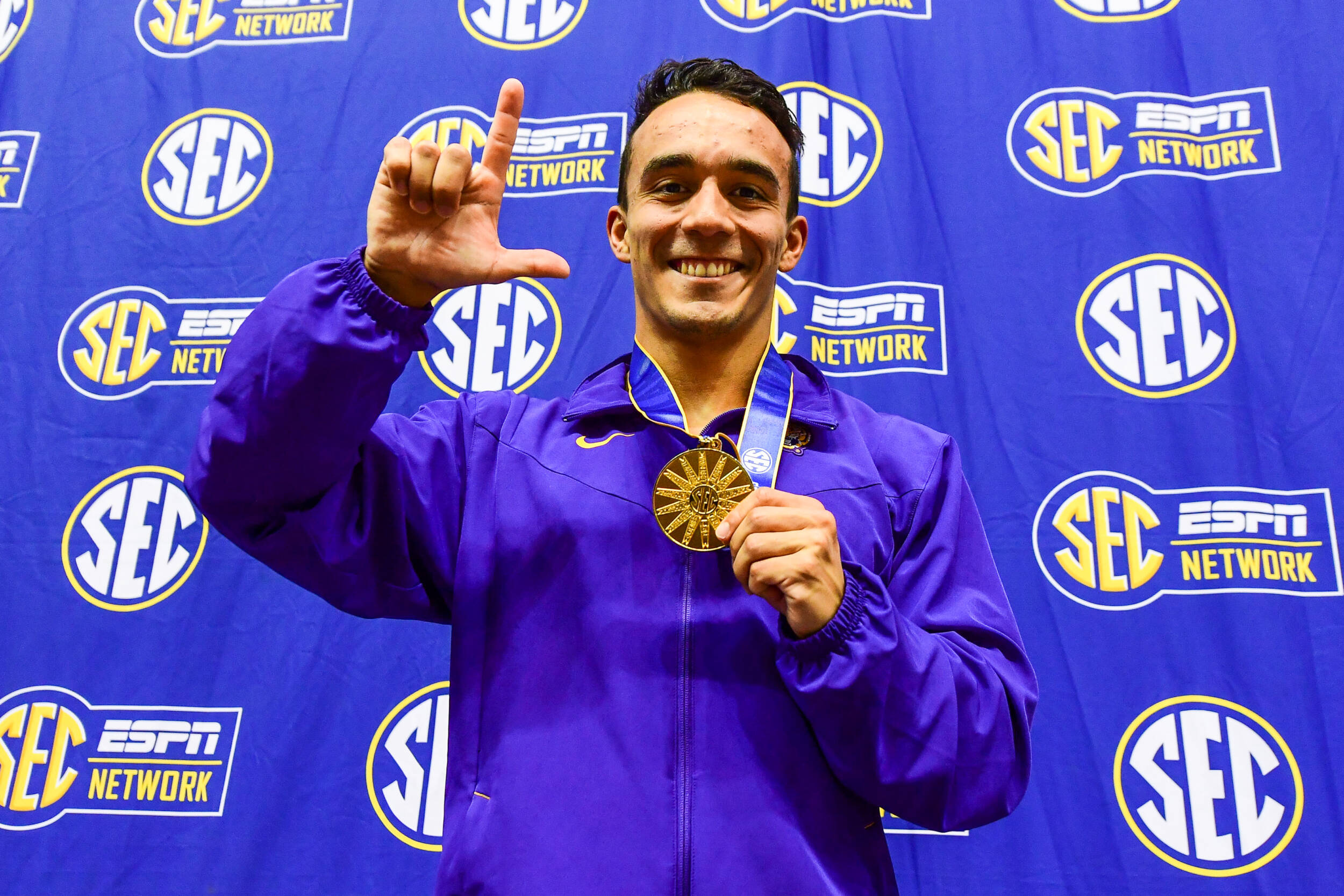 KNOXVILLE, Tenn. – LSU diver Juan Celaya-Hernandez, who is no stranger to the podium, won his sixth SEC Championship Tuesday night at the 2022 SEC Championships in the University of Tennessee’s Jones Aquatic Center, as he claimed gold on the three-meter springboard for the first time in his collegiate career.

“Coming into this meet, I was still working on details for my lift,” Celaya-Hernandez said. “I still wasn’t fully consistent. I was really trying to put all my lifts together and have a good meet. It was really close, there is a lot of energy here in the SEC, especially at this meet with all the swimmers cheering and the whole crowd going wild. So, that’s a little tough on your nerves and your breathing. But after that, I was really happy. I’ve been pursuing this for so long and it’s finally here. I’m really happy.”

The relay team for the men’s 200-yard medley relay, consisting of Griffin Curtis, Mitch Mason, Emil Hassling and Brooks Curry, broke the school record with a time of 1:24.79. Curry’s split time was the fastest of the freestyle swimmers, clocking an 18.14.

IN THE POOL
During the final session of Day One at the SEC Championships, the races were highlighted by the men’s 200-yard medley relay. Additionally, the women’s 200-medley relay swam a time of 1:37.96 to take 11th.

In the 800-yard free relay, the Tigers both placed tenth in their respective events. For the men, they nabbed 10th place with a time of 7:16.38, more than a second faster than their seed time, while the men clocked a 6:28.89.

ON THE BOARDS
Chiara Pellacani, who only recently joined the swimming and diving squad at the beginning of the Spring semester earned the silver medal for the one-meter springboard after earning a 316.70.

Pellacani, a native of Rome, competed in the prelims Tuesday morning, where she claimed second place with a final score of 285.80.

Montserrat Gutierrez Lavenant, who also qualified for the one-meter final, finished in sixth place with a final score of 287.95. In the prelims, she nabbed fifth place with a final score of 286.35. Tuxen sisters, Anne and Helle, finished next to one another, respectively, at 11th and 12th. Anne scored a 265.30, while Helle scored a 255.60. Maggie Buckley finished in 24th place, meaning every single LSU diver made an impact, scoring for the Tigers. She scored a 220.05.

For the men competing on three-meter, Adrian Abadia qualified for the final alongside Celaya-Hernandez, who had a prelim score of 433.10. After Abadia’s qualifying prelim score of 373.15, he finished the night in eighth place with a score of 360.20.

Zayne Danielewicz claimed 22nd place in the prelims with a score of 285.40, which matched the women’s effort to contribute to the Tigers’ overall score.