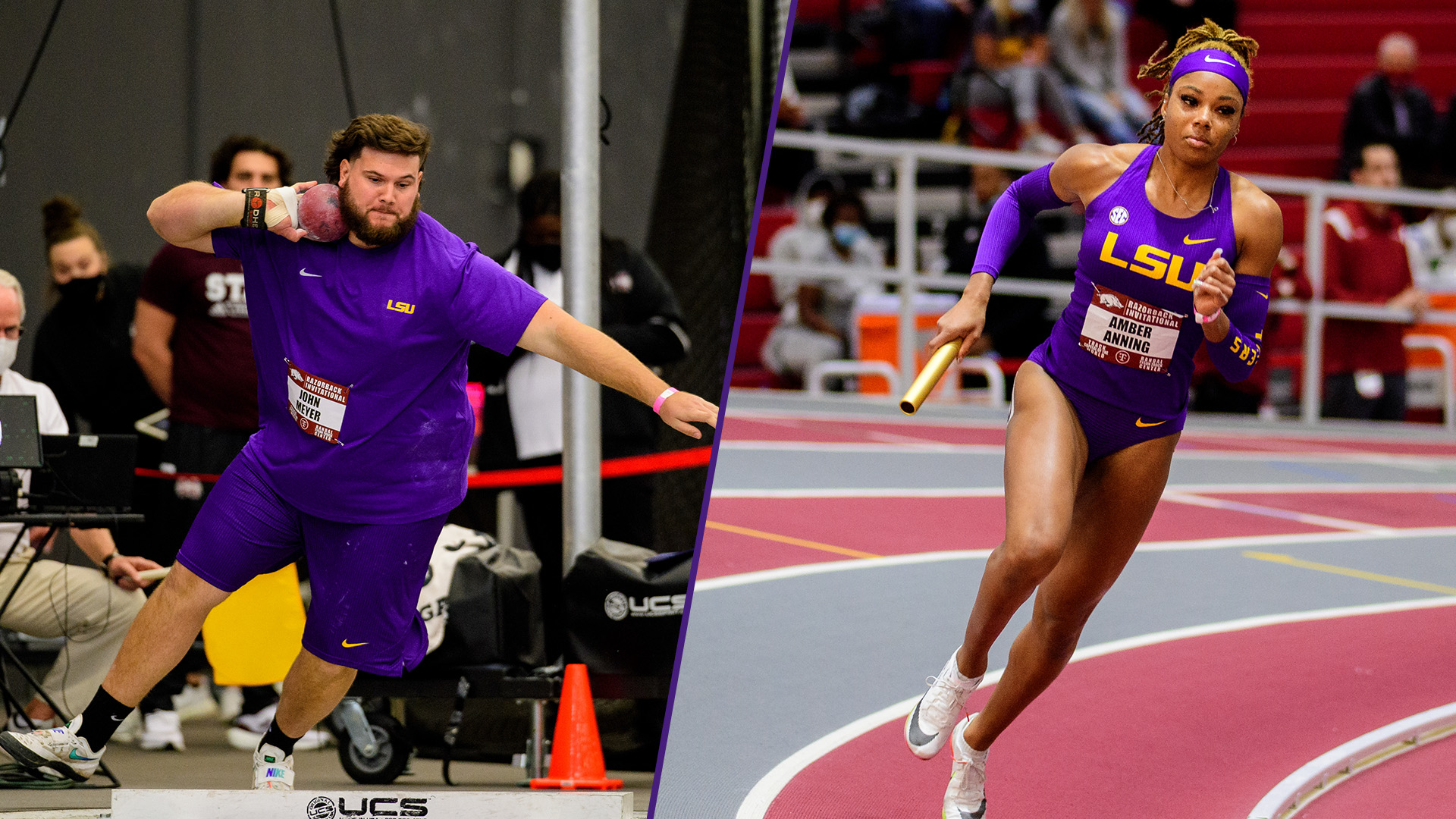 Baton Rouge, La. – For the second straight week the LSU track and field program will be in competition at two separate meets. A majority of the squad will head to Fayetteville, Ark., for the Tyson Invitational at the Randal Tyson Track Center, while a group of 15 distance runners head to Nashville for the Music City Challenge at the Vanderbilt Multipurpose Facility. Both meet will be streamed on SEC Network+.

In what is regarded as the most competitive meet of the weekend in collegiate track & field, LSU will be competing against a total of 18 ranked squads in the U.S. Track & Field and Cross Country Coaches Association Top 25. LSU will be taking on the likes of Alabama, Arizona State, Arkansas, Duke, Florida, Florida State, Iowa, Kansas State, Missouri, NC State, Nebraska, Ole Miss, Tennessee, and more.

The SEC Network+ stream is set for start times of 4 p.m. CT on Friday and 1 p.m. CT on Saturday. Direct links to the streams can be viewed below.

NCAA leader Lisa Gunnarsson will compete for the second straight week in the pole vault with a scheduled start time of 4:45 p.m. for the women’s pole vault on Friday. She registered a clearance of 14’ 9.50” (4.51 meters) in her 2022 season opener last week.

Alia Armstrong will return to the 60 meter hurdles after a week where she collected a personal best of 7.16 seconds in the 60 meter dash. Two weeks ago at this same track, Armstrong became the third fastest hurdler in collegiate history with a personal best of 7.86 seconds. She’ll be competing against Grace Stark of Florida, who has also matched the time of 7.86 seconds this season in the hurdles. So two of the five fastest hurdlers in collegiate history will be going head to head on Friday evening. The preliminary round for the hurdles is set for 5:30 p.m. CT, and the finals will be contested at 7:05 p.m. CT.

Eric Edwards Jr. will make his return to the 60 meter hurdles this weekend as well. Two weeks ago he ran a time of 7.68 in the event to win. His season-best altitude-converted time of 7.67 ranks fifth overall in the national standings. The finals of the men’s 60 meter hurdles will be at 6:55 p.m. on Friday night.

Four of LSU’s athletes who entered the top 10 list in program history last week in the 60 meter dash will lineup again in the event. Da’Marcus Fleming (6.60/PR), Dorian Camel (6.62/PR), and Kenroy Higgins II (6.66) ran fast last weekend and will look to replicate or improve upon those performances again. The finals of the men’s 60 meter dash is at 7:15 p.m. on Friday evening. Favour Ofili will double up again in the 200 meters (22.71) and 60 meters (7.17). Both of those times were registered last weekend by Ofili at the New Mexico Collegiate Classic and are personal bests; the time of 22.71 is an African indoor record in the 200 meters. Ofili will do the 60 meter dash on Friday night and the 200 meter dash on Saturday.

The women’s high jumping trio of Morgan Smalls, Abigail O’Donoghue, and Nyagoa Bayak will compete in the invitational portion of the event at 2:15 p.m. on Saturday. All three women rank inside the top 20 nationally in the event, with O’Donoghue’s season best clearance of 6’ 1.25” (1.86 meters) leading the way at No. 3 on the national list.

Sean Dixon-Bodie will take part in the invitational portion of the men’s triple jump at 2:20 p.m. Saturday afternoon. He competed for the first time in 2022 last weekend and notched a season opening mark of 52’ 4.75” (15.97 meters) to rank 10th nationally. John Meyer sits just outside of the national top 10 in the shot put with a season best of 63’ 6.75” (19.37 meters), which ranks as the second best mark in LSU history. He competes on Saturday at 12 p.m.

Michaela Rose will return to the track where she ran a personal best time of 2:04.80 in the 800 meters two weeks ago; that mark currently ranks as the 12th fastest nationally and is the second fastest by a freshman this season. The 800 meter run takes place at 1:15 p.m. on Saturday.

The group of 15 headed to Nashville will compete in the mile, 5,000 meters, 3,000 meters, and 800 meters. Friday’s action will feature Alicia Stamey, Sara Funderburk, Callie Hardy, Davis Bove, Eric Coston, and Adam Wise in the mile. This is the same track where Bove, a native of Franklin, Tenn., ran his LSU school record time of 3:57.49 almost a year to the date. A day prior Bove (8:00.34) and teammate Eric Coston (8:02.15) ran two of the five fastest times in LSU history as well in the 3,000 meters. Jackson Martingayle and Will Dart will close out Friday’s action in the 5,000 meter run.

Saturday will feature 10 LSU athletes competing. Bove, Coston, and Funderburk will all compete for the second time of the meet with Bove and Coston running the 3,000 meters, and Funderburk contesting the 800 meters. Doria Martingayle, Addison Stevenson, Alicia Stamey, and Cade Martin will also all run the 3,000 meters. Katy-Ann McDonald, who owns a season best of 2:05.27 in the 800 meters that ranks No. 16 in the NCAA, will compete again in the event for the second time this season. Dyllon Nimmers and Adam Wise round out the athletes in competition on Saturday as they will compete in the 800 meters as well.

The LSU women moved up to No. 4 in the latest edition of the U.S. Track & Field and Cross Country Coaches Association’s Rating Index that was released on Monday.