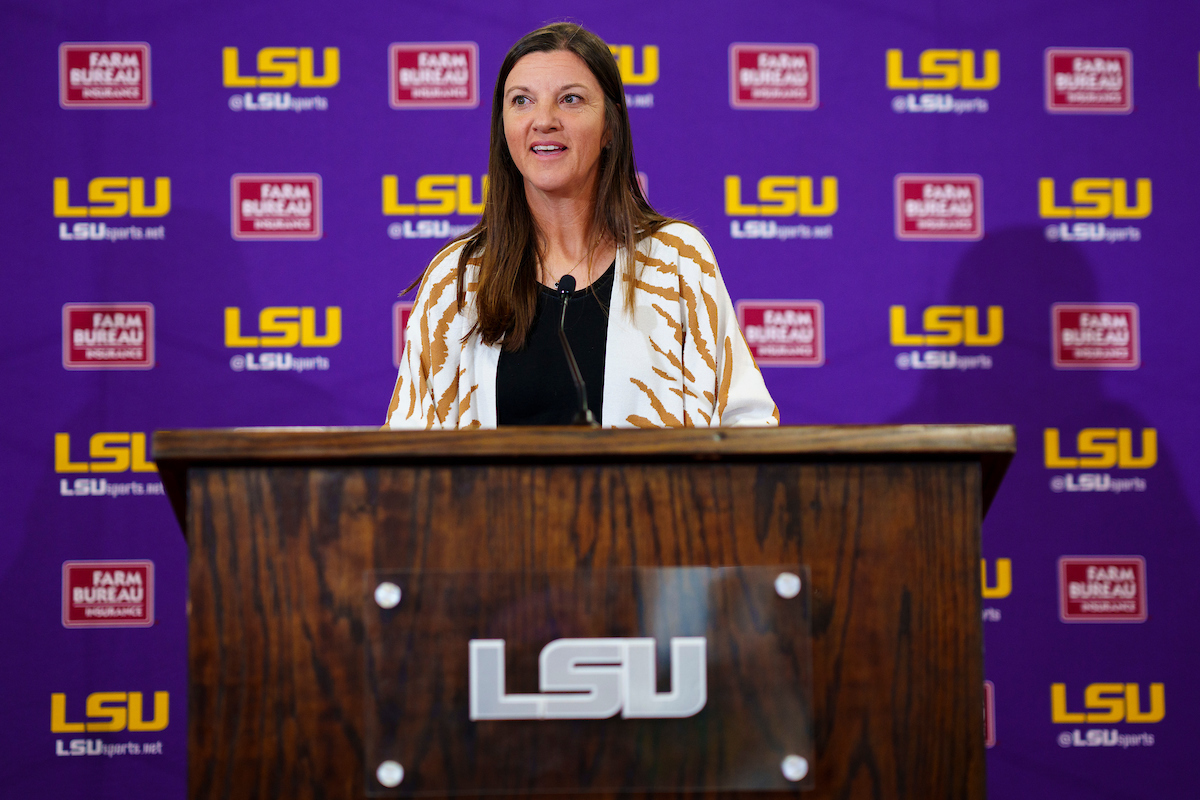 The Tigers will return 19 players from last season, a team that went 35-22 in what was the toughest strength of schedule among teams who completed a full season.

The Tigers will open the 2022 campaign with the Tiger Classic Feb. 11-13 at Tiger Park as they host South Alabama, Illinois and Central Arkansas. Below is head coach Beth Torina’s opening statement and answered questions from media day.

“There are a lot of new faces around with the program this year with our support staff, which is so important to who we are. We’re thankful for all the people that make our program work. Without question we are who we are because of these people that love our sport and love LSU. I’ve learned that it’s the year of the Tiger, right? So, for us and Joe Burrow let’s hope it’s the right year for a lot of championships. This year’s team has worked really hard and has had a really solid preseason. We’ve had to deal with; A lot of cold and adversity, but we truly haven’t missed one day on the field. We’ve had a lot of good prep and a lot of work, and this team has worked really hard to be ready for the season. I think the tell of last season is really the strength of schedule. The way that these guys attacked the historical levels and strength of schedule, finishing number one and then a mathematical number that is higher than any strength of schedule we’ve ever played here at LSU, and we’ve played some good ones, I think that was the tell of last year. As these guys take the field this season, there is nothing they won’t be prepared for. They have seen all of it. As far as production, we lose Aliyah Andrews and Amanda Doyle and the leadership of Maribeth Gorsuch and Akiya Thimes, but I think we have a lot of pieces in place. Obviously, we can’t replace some of these people, we don’t replace an Aliyah Andrews, but we have a great centerfielder in Ciara Briggs. She’s going to do it her own way and in a few years you all will ask me how we replace Ciara Briggs, too. We’re not trying to replace these guys; we are trying to be ourselves and do it our own way. I know you’ll see a lot of personality from this group as well. As we lead into 2022, another schedule that we’re really proud of. We have 23 games against preseason top-25 teams, so again we will be tested and be tested early in the first weekend. It’s a really tough schedule with South Alabama, Illinois, Central Arkansas and then we go to Clearwater where we get top-10’s in Oklahoma State, Washington, and Michigan in the top-15. We’ll see right off the bat if the work we’ve done this preseason will have us ready to go. Returning is a really strong group of not just athletes, but leaders. You have four of them here today and there’s some others, but Shelbi Sunseri and Taylor Pleasants, the All-Americans on the team, who don’t just lead us with their talent, they lead us constantly with their voices and the choices that they make off the field. I’m really proud of them. Ali Kilponen had a strong season last year and I’m excited to see what she’ll do. Her fall was even stronger than the spring that she put together. Georgia Clark will help lead this offense again and I think some of the biggest changes you’ll see is in her defense as well as she leads us on the field. We have a really strong core group that I trust, and I love how they play and how they lead us. I think they represent Tigers in all that they do and that’s our core values that they try to be Tigers for life. We added six freshmen to the group. We’re excited and you’ll see some of them the opening weekend. I think you’ll see a couple of them all season long. Baylea Brandon and McKenzie Redoutey are the two players that are going to bring a lot to the offense. I think you’ll see really big power numbers from them. They both are in the outfield. You’ll see Sydney Peterson in the infield, she’s an incredible defensive player. You’ll be excited watching the defensive plays that she makes, and then Raelin Chaffin on the mound. She’s from Shreveport so I know all of the Louisiana folks will enjoy watching her. She’s a great competitor and I know our team already likes playing behind her and what she brings to us. Also. Some speed with Madilyn Giglio and KK Madrey. We’ll add them to the group as well. We had a really fun offseason. We had four players at the national team tryout, where Taylor Pleasants made the national team. Coach Dobson got a silver medal this summer. Raeleen Chaffin got a gold medal in the WBSC. These guys have not just been hanging out, they’ve been making some noise in the softball world and in the softball community. We’re proud of this team and everything that they’re accomplishing right here at LSU and everything that they’ve accomplished this offseason as well. We will kick off a week from today; 3 o’clock South Alabama and 5:30 against Illinois right here at Tiger Park and we’ll be as ready as we can be. We talk all the time that we don’t have to be perfect, we can play our best softball in May, but we just have to be better than South Alabama next Friday at 3 p.m. and that’s what we’ll try to do.”

On the development of the staff…

“I’m still not going to tell you who’s pitching. Mostly because I have no idea. Our staff is so strong that it is always a game time decision. We’re walking down the stairs to the game sometimes still trying to decide because we have so many good options. We’ve talked about Ali Kilponen’s development. Shelby Sunseri is throwing as well as I’ve ever seen her. She’s in an incredible spot both offensively and on the mound. We also really like what we see from Shelby Wickersham. The ball is moving a lot for her right now and I hope she can hang onto that. We also have Rae Chaffin, Morgan Smith, Taylor Edwards, and Emilee Casanova that you will see. This opening weekend you’ll see several different starters. You’ll definitely see Rae Chaffin as a starter, and we’ll go from there.”

On replacing Amanda Doyle at third base…

“Right now, we have Danieca Coffey and Jordyn Perkins working out at third base. Danieca made the move from the middle infield over to third base and she has done really well. She has a lot of speed, so she makes a big difference for us with bunts and plays in front of her. Jordyn has just done so much. She’s in her fourth year with us and has been really big off the bench as a pinch hitter. She is competing for the spot as well and showing a lot of good offense and power.”