Brandon Murray had a season high of 21 points. 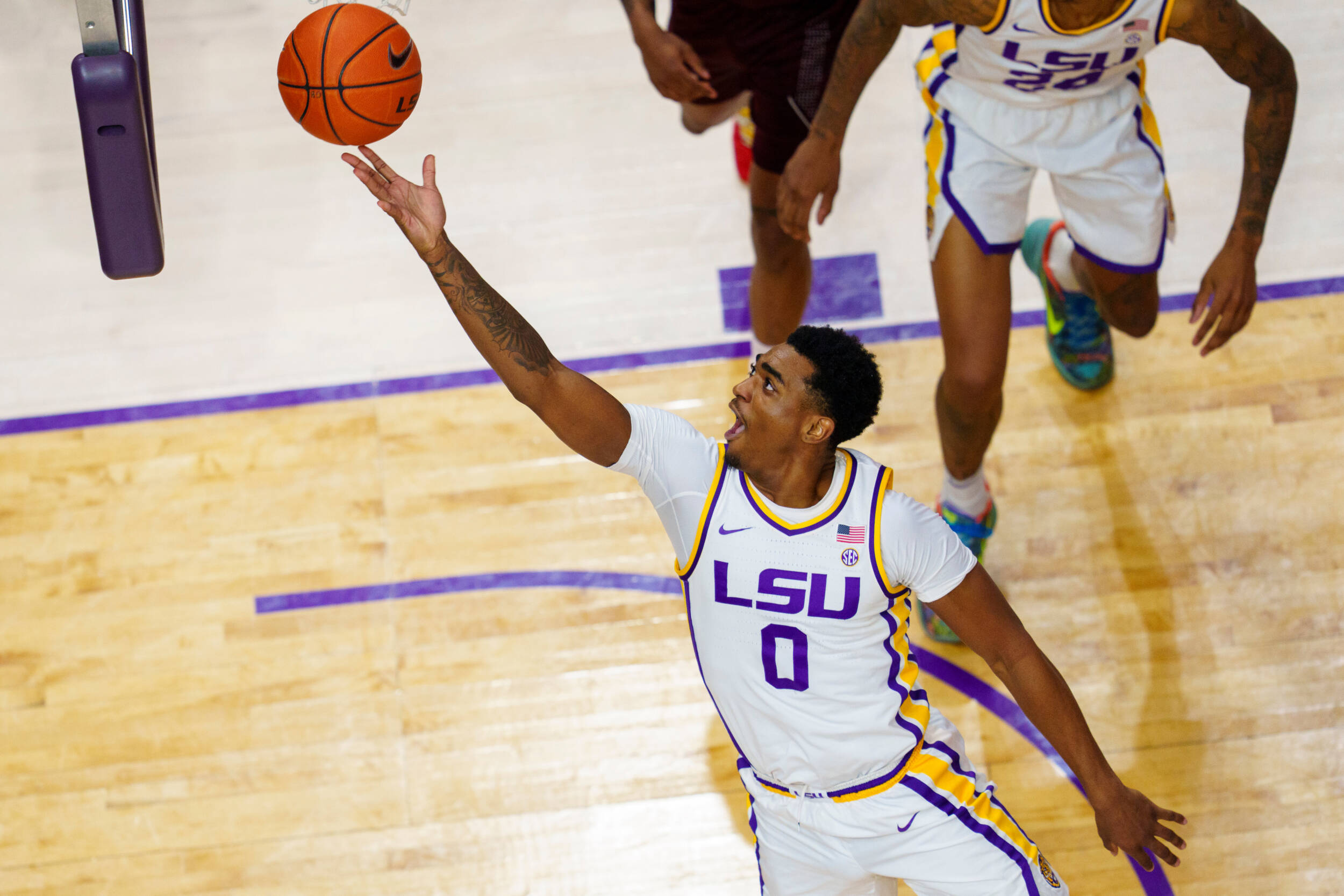 BATON ROUGE – The 18/19 LSU Tigers, down three players at the end, outscored Texas A&M, 13-2 over the final 3:34 of the game to score a rallying 70-64 win over the Aggies Wednesday night at the Pete Maravich Assembly Center.

LSU played the game without Xavier Pinson (MCL sprain) and Darius Days (ankle) and a good portion of the second half with Tari Eason suffering from cramps that forced him to the bench and eventually the dressing room.

The lead went to five when Quenton Jackson hit a layup after an LSU turnover. Eric Gaines was fouled as the teams went to the final media timeout with 3:34 to play.

Texas A&M got their final points of the game with 1:45 to play on a second chance bucket after an A&M miss by Tyrece Radford that gave the Aggies a 64-61 lead.

LSU called a timeout and out of the timeout came up with a play that found Mwani Wilkinson open for a three and he buried his only shot of the game to tie the contest at 63-63 with 1:18 to play.

A&M called timeout and Marcus Williams missed a three, A&M got the offensive rebound and Jackson missed a layup. A&M got the rebound again and Andre Gordon’s shot was blocked by Shareef O’Neal.

Murray finally got the rebound and LSU called its final timeout with 36 seconds left and the game tied. Gaines drew a foul three seconds into the play and made two free throws to give LSU the lead for good at 66-64.

A&M missed another three-pointer and Gaines his two free throws to give what equaled LSU’s biggest lead of the night at six points.

Both Justice Williams, Tari Eason and Alex Fudge had their first career starts for the Tigers.

LSU will step out-of-conference on Saturday at 11 a.m. when they travel to TCU as part of the SEC/Big 12 Challenge. LSU is back at home next Tuesday at 8 p.m., hosting Ole Miss. Tickets for that game are available at LSUTix.net.

Opening statement…
“Well, it was a great, great win. We found a way. Eric Gaines played his best game here. He was phenomenal, just tremendous. I am just proud of our guys. It wasn’t easy. It is never easy, but I am really proud of our guys. We made the free throws when it mattered. We did not make many of them during the game, but we made them when it mattered. I thought the crowd was great. The students were great. I am just very proud of our group. To play the last 12 minutes basically without Tari (Eason) and Shareef made some big plays for us. Brandon Murray, he is just a warrior.”

Guard Brandon Murray
On making each possession count due to increasing injuries
“We knew it was going to be a dogfight. They (Texas A&M) played really hard and aggressive but we ended up doing what we had to do. Like Eric said, it’s always about the next man up.”

Guard Eric Gaines
On locking in at the free-throw line down the stretch.
“We all are good free-throw shooters. Coach (Will Wade) always tells us to take our time, take a deep breath and knock them in. That’s what we did at the end.”

On game-saving block
“I saw him (Andre Gordon) by himself and went for it even though I had four fouls. I had to make that attempt. And I did. I got the block and sealed the game at the free-throw line.”

Opening Statement…
“Several different reasons bothered us tonight. I think their 2-2-1 pressure bothered us. Our turnover rate was too high which led to transition baskets for them. The second thing was, in the half court, they had too many offensive rebounds and we did not do a very good job from a defensive rebounding perspective. I thought we brought the game towards us much more in the second half of the game, regardless of what the opponent was doing. We still need to play our way, we had the same number of turnovers, just not the same type of turnovers. We handled their pressure. When we broke through, we had a really good idea of when to attack them in rotation versus when to pull it out. I felt that Andre (Gordon) played much better today, it was good to have him back. I felt that although they were in a game that was competitive and physical, there were too many 50/50 type balls, unclean rebounds, 50/50 loose balls on the ground, and possible jump balls. I thought in a game as highly contested as this one, especially on the road, we have to do a better job.”

On the shots made in the last three minutes of the game…
“I thought we had a really good feel. I thought the group that we had on the floor got into a good groove at handling their pressure, knowing when we broke it, and knowing when to score when we are at an advantage or disadvantage. When we did break it, we had a really good feel for running a half-court set. I was really pleased with our statistics for the most part in the entire second half. I thought some of our shots in the first half were not necessarily bad, but we didn’t create for others and we didn’t play off of two feet to get to the free-throw line. We got to the bonus pretty quick in the second half, so I thought we were more comfortable then.”