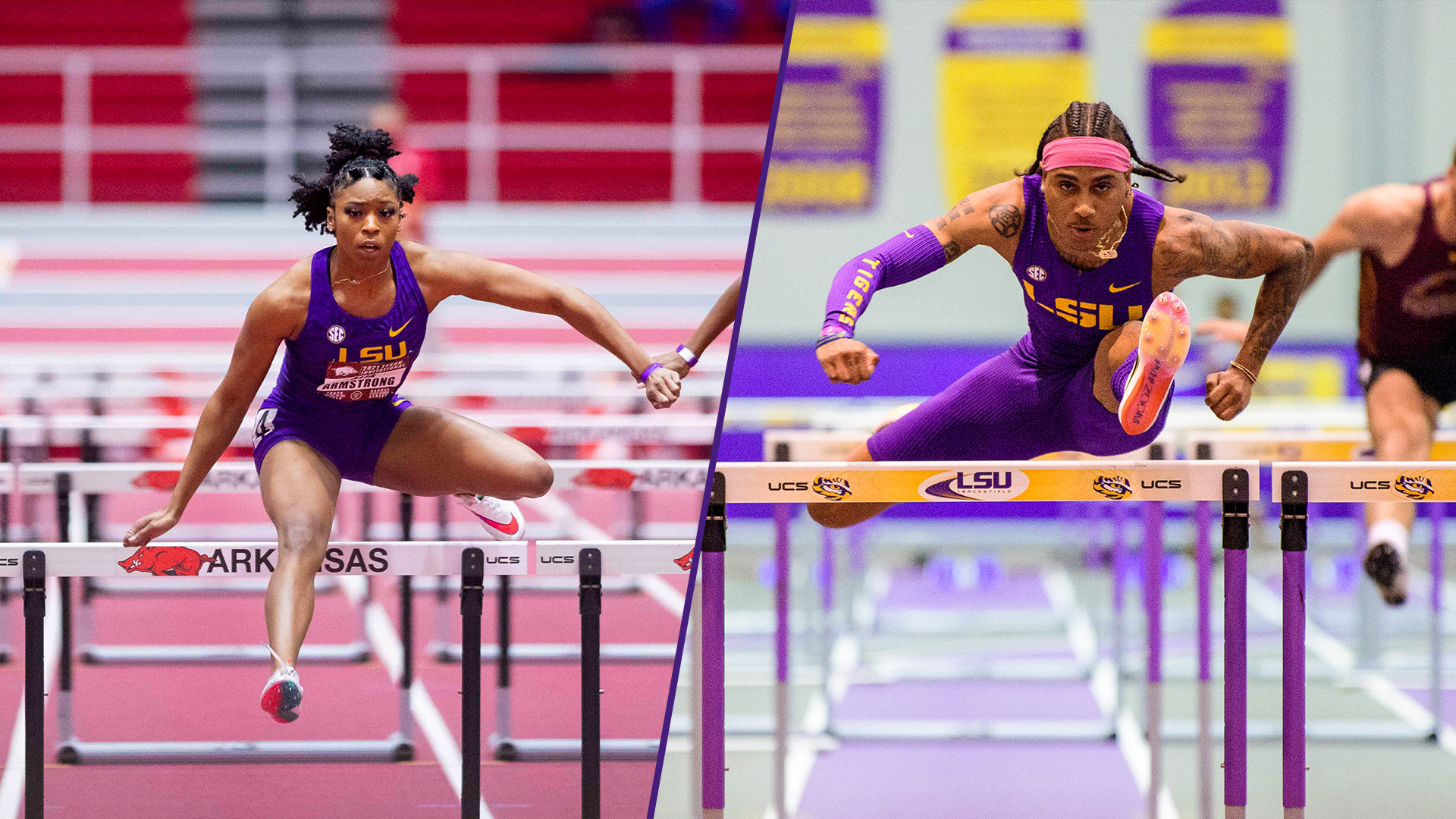 Lubbock, Texas – LSU track and field’s day at the Red Raider Open at the Sports Performance Center was highlighted by a pair of meet records in the 60 meter hurdles. Alia Armstrong (7.96) and Eric Edwards Jr. (7.65) both won their respective events on Friday with season bests that rank way up near the top of the national rankings.

All in all, Edwards Jr. has now run four races in the 60 meter hurdles this season, and he’s dropped his time in ever single race. He started off a week ago with times of 7.81 and 7.78 at home, and then his preliminary round time of 7.75 qualified him through to finals as the top time. He burst out the blocks en route to taking gold in the finals with a season best of 7.65 while breaking former teammate Damion Thomas’ previous meet record of 7.66 that was set in 2019. Edwards Jr.’s time of 7.65 will be converted to 7.67 for NCAA purposes and ranks No. 2 nationally.

.@YouNgeSaVage__ claims the title in the men’s 60 meter hurdles finals with a MEET RECORD of 7.65! That time will convert to 7.67 for NCAA ranking purposes and is the second fastest collegiate time this season.

No less than five minutes after Edward Jr.’s triumph, Armstrong made a splash of her own. Coming into the race with times of 8.21, 8.18, and 8.04 on the season, Armstrong was primed and ready for a sub-eight second performance. Owning a career best of 7.95 from back in 2020, Armstrong nearly eclipsed that mark with a blistering time of 7.96 to set her own meet record, breaking the previous one from Taliyah Brooks (8.10) in 2020. After the plus two-hundredths of a second conversion due to altitude, Armstrong ranks No. 3 on the national list. Leah Phillips also made the women’s final in the hurdles and ran a PR of 8.20 seconds to place sixth.

Second MEET RECORD in as many races for the Tigers as @aliaarmstrong_ wins with a time of 7.96! That converts to a 7.98 for the third fastest time in the NCAA this season.

The final event winner on the day for LSU was Kyndal McKnight in the triple jump. She leaped out to a mark of 41’ 3.25” (12.58 meters) in the event on her third attempt and that mark stood for the rest of the competition. In the women’s high jump, Abigail O’Donoghue registered a season best clearance of 6’ 0.50” (1.84 meters) to finish second overall and as the top collegian. She finished second to 2020 Olympian Rachel McCoy. Nyagoa Bayak matched her season best clearance in the event as well with a mark of 5’ 11.25” (1.81 meters) to place fourth.

Michaela Rose, a true freshman from Suffolk, Va., nearly set a meet record of her own in the 600 yard run. She clocked a personal best time of 1:20.78 for second overall, and the time was three hundredths of a second off of the previous meet record in the event.

Amber Anning showed tremendous upside for the second straight week of competition as she registered a personal best in the 200 meters. Anning, who features in the 400 meters for LSU, clocked a time of 23.38 in the 200 meter dash to finish third amongst a group of 12 runners. The time, after conversion, equates to a 23.45 and ranks No. 5 in the NCAA early on this season.

Favour Ofili ran a personal best of 7.24 seconds in the 60 meter dash in the preliminary rounds before following that up with a time of 7.26 in the finals for a fourth place showing.

Both of LSU’s 4×400 meter relays closed out the meet with top-10 national times. The foursome of Anning, Symone Mason, Garriel White, and Ofili ran a time of 3:35.69 to place fifth overall and register the eighth fastest time nationally. The men’s group of Ashton Hicks, Dorian Camel, Aaron Smith, and Sean ‘Squirrel’ Burrell finished fourth in their event with a time of 3:08.41 to rank eighth nationally.

Up Next
LSU will travel to Fayetteville, Ark., next week for the Razorback Invitational January 28-29.