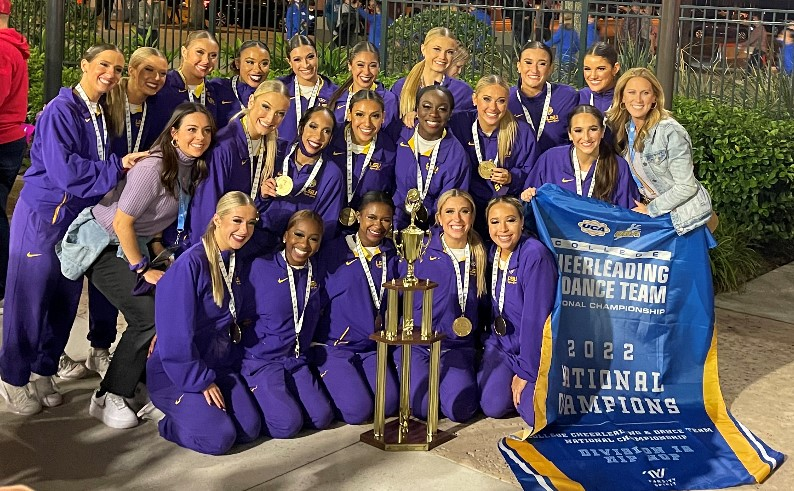 The LSU Spirit Squads traveled to the ESPN Wide World of Sports Complex for the Jan. 14-16 championships, which brought together the very best collegiate cheer and dance teams from around the country.

“I am so proud of the LSU Spirit Squad members,” LSU Spirit Director Pauline Zernott said. “Everyone worked so hard to represent LSU at the prestigious Varsity National Collegiate Cheer and Dance Championship. They are the spirit of this great University and absolutely shined bright throughout the entire competition. In my 30-plus years with the LSU Spirit Program, having been on the 1989 LSU National Cheerleading Championship team and throughout the last two dance National Championships, I have never witnessed such a driven team. Our coaching and support staff has worked tirelessly to help give our team’s the best possibility to go out and win! We are thrilled to bring our third Dance National Championship and sixth-place cheer finish home to Baton Rouge.”

The Tiger Girls competed in both the Division IA Hip Hop and Jazz divisions. The Tigers Girls also competed against 27 other schools in the Jazz division and finished in eighth place.

“The Tiger Girls have always been big in the collegiate dance team world and are well known for their athleticism,” Tigers Girls Coach Kandace Hale said. “I’ve coached this program for the past seven years and can honestly say that you will not find another team like this one. They are not only talented, but they are humble, hard working and genuine young women. These ladies are the most deserving group and we are all so proud of their hard work. A big thank you to Carsen Rowe and Samantha McFadden for the amazing choreography. This routine is iconic and will be talked about for years.”

The LSU Cheerleaders competed among 15 other schools in the Cheer Division 1A. The Tigers executed a great routine during the semifinal round that advance them to the finals. LSU finished sixth overall in the competition’s final round.

The championship rounds will be aired on ESPN later this spring.

This Week: A profile of second-generation LSU student-athlete Shelby Wickersham; an introduction to football quarterbacks coach Joe Sloan; a preview of the NCAA Men’s Golf Regional; highlights of Tyrann Mathieu’s amazing career; and an inside look at NFL legend Drew Brees’ visit with the LSU baseball team.
Inside LSU Sports - Episode 19 (2022)