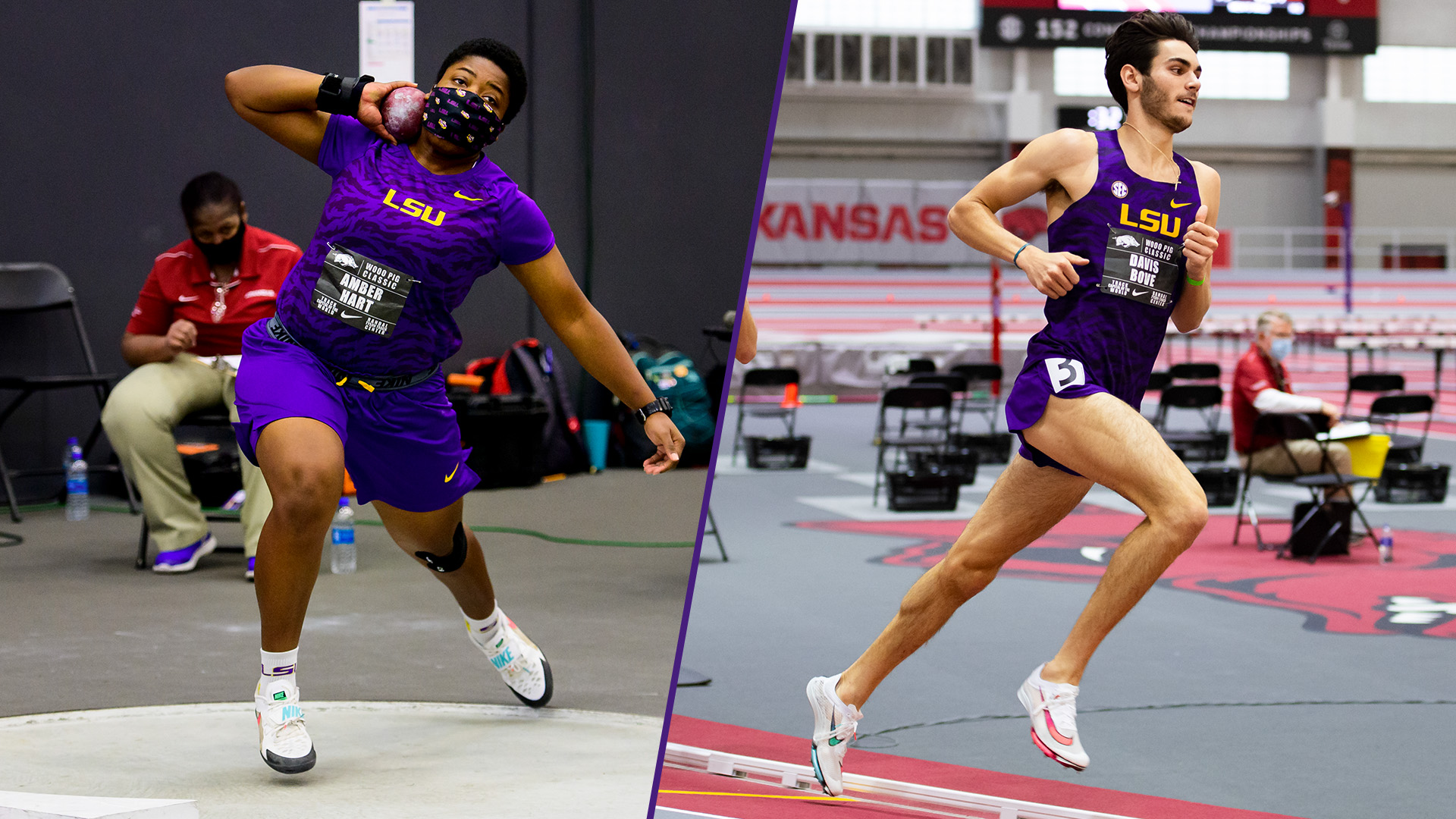 The meet is the first of eight regular season meets for the Tigers before postseason action begins on February 25-27 with the SEC Championships being hosted in Bryan-College Station, Texas. The indoor season will wrap up in Birmingham, Alabama, as the NCAA championship meet will take place March 11-12.

Hall of famer Dennis Shaver enters his 18th season at the helm of the LSU track and field program after he took over as head coach in the summer of 2004. Shaver led the LSU men to an NCAA outdoor national title in 2021, and both women’s (3rd) and men’s (2nd) squads earned top three finishes at the NCAA Indoor Championships in 2021.

The meet gets started at 11:45 a.m. for the Tigers with the men’s weight throw in which Jevan Parara will represent the Tigers in his LSU debut. Running events are scheduled to begin at 2 p.m. A full schedule for Friday’s meet can be viewed at lsusports.net. A competition guide for LSU athletes can be viewed at the hyperlink above. ­

Abigail O’Donoghue and Nyagoa Bayak will open up their 2022 seasons in the high jump Friday. Both O’Donoghue and Bayak scored points for the Tigers at the 2021 NCAA Indoor Championships. USC transfer and All-American Morgan Smalls will open her LSU account in the long jump on Friday as well.

Indoor Season Primer
LSU has 11 athletes on the 2022 roster that scored points at the 2021 NCAA Championships a year ago including NCAA champions Lisa Gunnarsson and Noah Williams. Gunnarsson, who is entering year four in the Purple and Gold, won the 2021 pole vault national title indoors with a clearance of 14’ 11.50” (4.56 meters). That mark set the LSU school record and put her in the No. 8 spot on the all-time collegiate list indoors. Williams won his 2021 NCAA indoor title in the 400 meters with a blistering time of 44.71. That readout set an LSU school record, ranked as the third fastest in NCAA history, and is the fourth fastest in world history indoors.

Amber Anning and Favour Ofili both scored in two events at the 2021 NCAA meet. Anning ran a personal best of 51.83 seconds in the 400 meter dash to take fifth while also helping the 4×400 meter relay to a fourth place finish. Ofili was also a member of the 4×400 meter relay squad while scoring individually in the 200 meters (22.96) with a sixth place finish. Anning (51.83/400 meters) and Ofili (22.75/200 meters) have the second and third fastest times in program history in their respective events. Symone Mason makes it three returnees from that 4×400 meter relay that finished fourth at the NCAA meet, and her personal best of 22.76 in the 200 meters ranks as the No. 3 time in LSU history.

The high jumping duo of Abigail O’Donoghue and Nyagoa Bayak will look to score more points for LSU this season again at the postseason meets. O’Donoghue, the school record holder in the event with a clearance of 6’ 2.25” (1.89 meters) last season, finished fourth at the 2021 NCAA meet, and Bayak placed sixth; Bayak’s career best clearance of 6’ 0.50” (1.84 meters) in an LSU uniform is the sixth best in LSU history. O’Donoghue and Bayak will be joined by transfer jumper Morgan Smalls from USC. Smalls finished eighth at the 2021 indoor national meet and also qualified for the long jump event.

The other three men that scored points on the national scale for the indoor season last year are Eric Edwards Jr. (60m hurdles), Sean Dixon-Bodie (triple jump), and John Meyer (shot put). Edwards Jr. and Dixon-Bodie both registered personal bests at the 2021 NCAA meet in their respective events. Edwards Jr. clocked a time of 7.58 in the hurdles while Dixon-Bodie leaped out to a mark of 54’ 5.25” (16.59 meters) en route to fifth place showings by both athletes. John Meyer, a transfer from the University of Michigan, notched a seventh place finish at last year’s NCAA indoor meet in the shot put.

School record holder Davis Bove headlines another group of solid returners with LSU top 10 times. Bove set the school record for the mile with a time of 3:57.49 at the 2021 Music City Challenge. Under 20 world record holder in the 400 meter hurdles outdoors, Sean ‘Squirrel’ Burrell comes into the 2022 season with the seventh fastest 400 meter dash readout in program history indoors with a best of 45.57 in the event. Eric Coston improved his career best time in the 3,000 meters by 22 seconds in 2021 for a career best mark of 8:02.15 that ranks as the fifth fastest on the LSU list.

Alia Armstrong became the third fastest 60 meter hurdler in LSU history during the 2021 indoor campaign with a time of 7.95, and Thelma Davies rounds out a group of sprinters in the 200 meters that could produce big time for LSU this year. The aforementioned Ofili (22.75) and Mason (22.76) have slightly quicker times in the 200 meters than Thelma Davies (22.80), but those three times rank No. 3, No. 4, and No. 5 in LSU history. If all three of those women are clicking, it’s not too farfetched to think LSU could slip in three finalists in the 200 meters at the SEC and NCAA level this indoor season.

Distance runner Katy-Ann McDonald will look to carry the momentum she built during the cross country season over to the indoor track; McDonald owns the No. 9 time in the 800 meters in school history (2:04.59). Fellow distance runners Julia Palin and Alicia Stamey also have LSU top 10 marks as Palin ranks No. 2 and No. 5 in program history in the 3,000 meters and 5,000 meters, respectively. Stamey’s personal best of 9:48.41 in the 3,000 meters is the sixth best in the LSU record book.

The throws corps has three returnees with marks in the school record book. Those three athletes are Jon Nerdal (weight throw), Jake Norris (weight throw), and Amber Hart (shot put). Nerdal narrowly missed out on scoring points for the Tigers in the weight throw a season ago at the national meet with a ninth place finish. For a list of all-time LSU school marks, visit lsusports.net.