Tari Eason became the first LSU player to post a 20-10 double since the SEC Quarterfinals, 2021 with 24 points-12 rebounds. 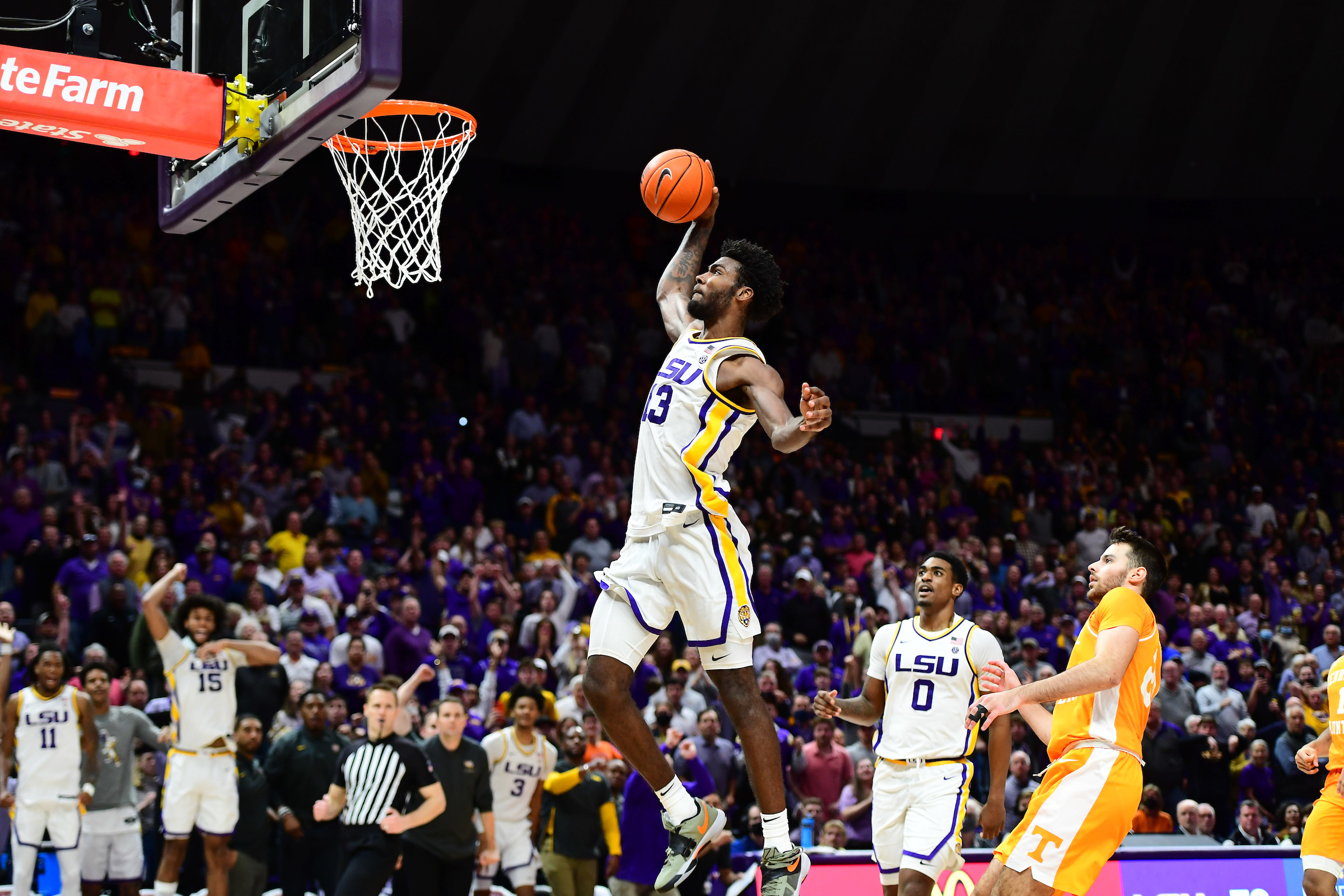 BATON ROUGE – In a year when defense has been the mindset for the No. 21 LSU Tigers, it was offense that carried them to a 79-67 win over No. 18 Tennessee before a raucous crowd of 12,881 Saturday evening at the Pete Maravich Assembly Center.

LSU won both games on the week over nationally-ranked teams (Kentucky, Tennessee) and comes out of the first stretch in school history of opening with three ranked Southeastern Conference teams with a 14-1 record and 2-1 in the league.

LSU was up 16-15 when LSU went on an 8-0 run starting with Xavier Pinson getting a free throw. On his second free throw miss, Tari Eason rebounded and put the ball back in and Brandon Murray off a Tennessee turnover also had a bucket. The lead moved to 24-15 when Darius Days hit a three-pointer.

The lead was as big as 10 twice in the first half.

Eason posted the first 20-point, 10-rebound double double for the Tigers since Darius Days had one against Ole Miss in the quarterfinals of the 2021 SEC Tournament with 24 points and 12 boards. Eason hit 9-of-16 from the field with a trey and had one of the team’s good nights at the line, making 5-of-6.

Darius Days hit 6-of-10 with two treys in a 15-point effort and Brandon Murray continued his strong play with 13 points.

Xavier Pinson had nine points and seven rebounds before leaving the court with 3:28 on the court with what Coach Will Wade described as a “knee sprain.” Further evaluations were expected Sunday or Monday.

In the second half, the Tigers continued to apply offensive and defensive pressure (getting double figure steals for the 12th time this season) and pushed the lead to as much as 20 points at 62-42 with 14:13 left as LSU used an 11-point run that sent the LSU crowd into a frenzy.

The game turned into a free-throw contest at times in the second half with 44 fouls being called in the game and the teams combing for 64 free throws.

Right after Pinson left the game, Tennessee closed the contest to five points, 71-66, on a Vescovi three-pointer, but the LSU defense was able to answer the call and turn Tennessee mistakes into points as Murray had a layup and Eason a dunk off a Mwani Wilkinson rebound in transition to put the martin back to nine at 75-66 with 1:21 to play.

The Tigers go on the road on Wednesday night at 6 p.m. CT to Gainesville to take on the Florida Gators, losers on Saturday at Auburn. LSU returns to the Maravich Center on Saturday, Jan. 15, to take on the Arkansas Razorbacks at 1 p.m.