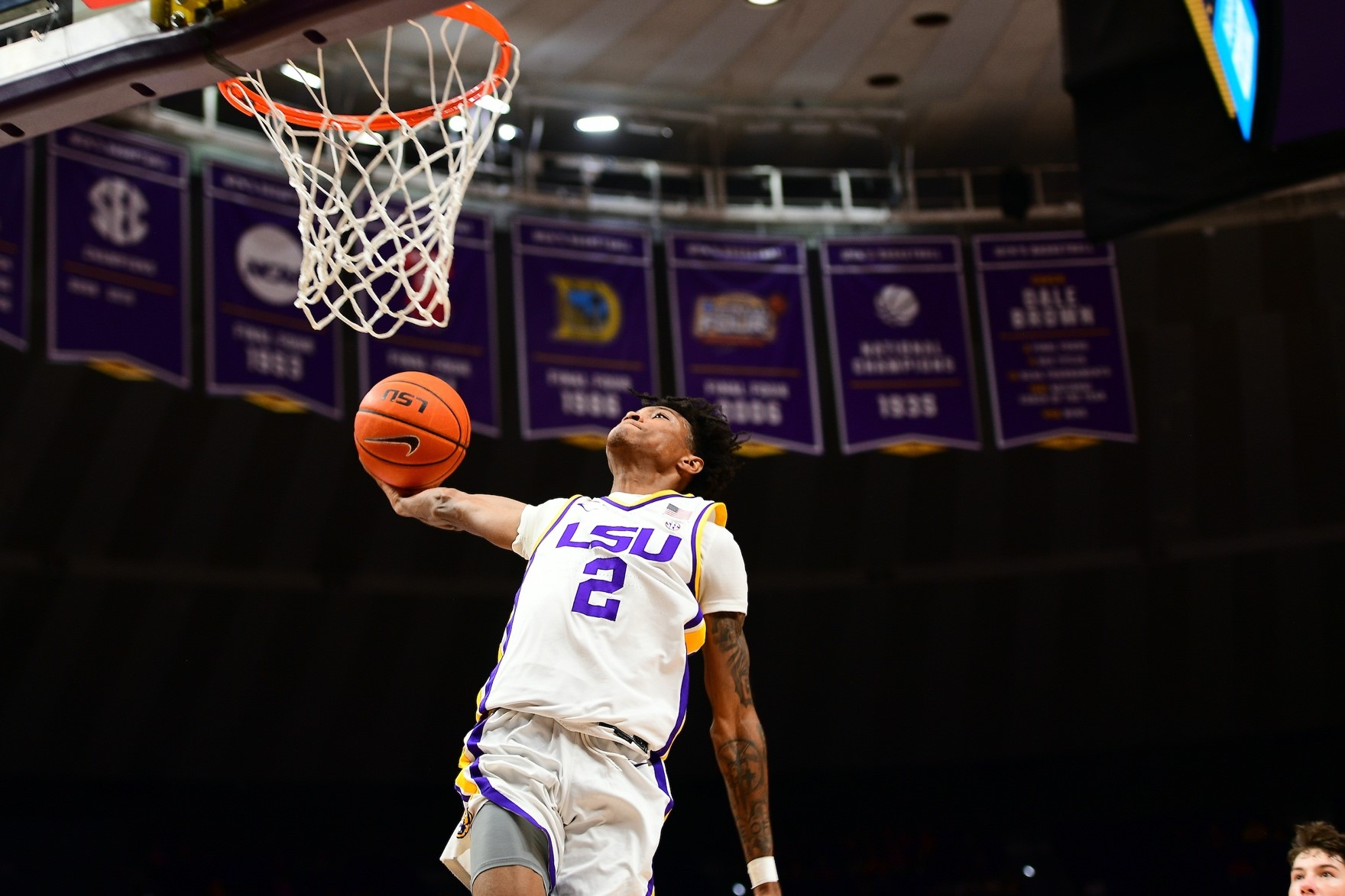 BATON ROUGE – The LSU Tigers finished the pre-Christmas schedule with a perfect 12-0 record and remains one of five unbeaten Division I college basketball teams with a 95-60 win over Lipscomb Wednesday night at the Pete Maravich Assembly Center.

The Tigers team will take a few days off for Christmas before resuming practice on Dec. 26 in preparation for LSU’s Southeastern Conference opener on Dec. 29 at Auburn

Lipscomb (6-8) shot just 39.2 percent for the game, but did shoot 50 percent in the second half after a first half in which LSU allowed just seven field goals.

Six LSU players were in double figures with Darius Days hitting 5-of-8 treys and finishing with 21 points. Xavier Pinson had 17 points, five assists and five steals, with Brandon Murray (5 assists) and Eric Gaines (6 assists) each scored 13 points. Efton Reid had 12 points and a game-high nine rebounds and Mwani Wilkinson had 11 points.

LSU’s leading scorer, Tari Eason, did not play in the game because of back issues. He is expected to be ready for LSU’s game at Auburn.

The LSU offense was on point early getting a 10-0 run early to lead 18-5. LSU had 10 of those points off turnovers as the defensive pressure was able to create scoring opportunities for the Tigers.

Lipscomb had a brief eight-point scoring run that closes the Tigers lead to five at 18-13 at the mid-way points but the Tigers were just two strong and continued to move the ball effectively on offense, building as much as a 24-point lead with 1:11 to go in the half and LSU went to the dressing room, up 48-24.

In the opening 20 minutes, LSU had 11 assists on 19 made baskets and just four first-half turnovers. The Tigers also made eight-of-16 first-half three-pointers as Days found the shooting touch again from the arc, hitting 4-of-6 to score 12 first-half points.

The Tigers biggest lead of the game was 42 points with 3:05 left in the game. LSU would shoot 60 percent from the field in the second half hitting 21-of-35 shots with four treys.

One issue for the first time this season was at the free throw line as the Tigers missed early and often, making only 3-of-10 attempts.

LSU forced 22 turnovers in the game and got 30 points off turnovers for the full game, while LSU dominated in the paint to the tune of 56-22. LSU outrebounded the Bisons, 44-28 with a 14-4 advantage on the offensive glass. LSU had 20 assists on 40 made baskets and 15 total steals.

“Alright, what do we want to talk about? We won, we’re 12-0, we’ve got to get a lot better heading into the SEC. We turned it over 10 times in the second half, gave up nine points and three three’s in the last four minutes to get to 60 points. I liked the way we moved the ball – six guys in double figures, would’ve been seven with (Alex) Fudge, he was right there. That was a positive. Twenty assists, that was a positive.”

“We just talked about that for 10 minutes in the locker room. We’re going to have to be much better than we’ve been to go into Auburn and give ourselves an opportunity to win.”

“Well, we knew it was going to be really tough coming into the game. They’re leading the country in field-goal percentage defense at 33%, which you don’t do by accident. I think they’re really good and well coached. They were shooting at 30% from three on the season and then they go 8-of-16 in the first half. At one point they were 10-of-18 and they ended up finishing with 12 on the night, which if they make 12 three-pointers, shooting 56%, not a whole lot of people can beat them here. There’s a lot of things that we need to get better at and improve on. It’s been a tough stretch for us with the schedule and guys being hurt, but we’re not going to make excuses. We’re going to come back to work on the 26th and then we’re back at it on the 30th (vs. Alabama A&M). We’re going to be better for what we’ve gone through, we’ve just got to stay positive and stay after it.”