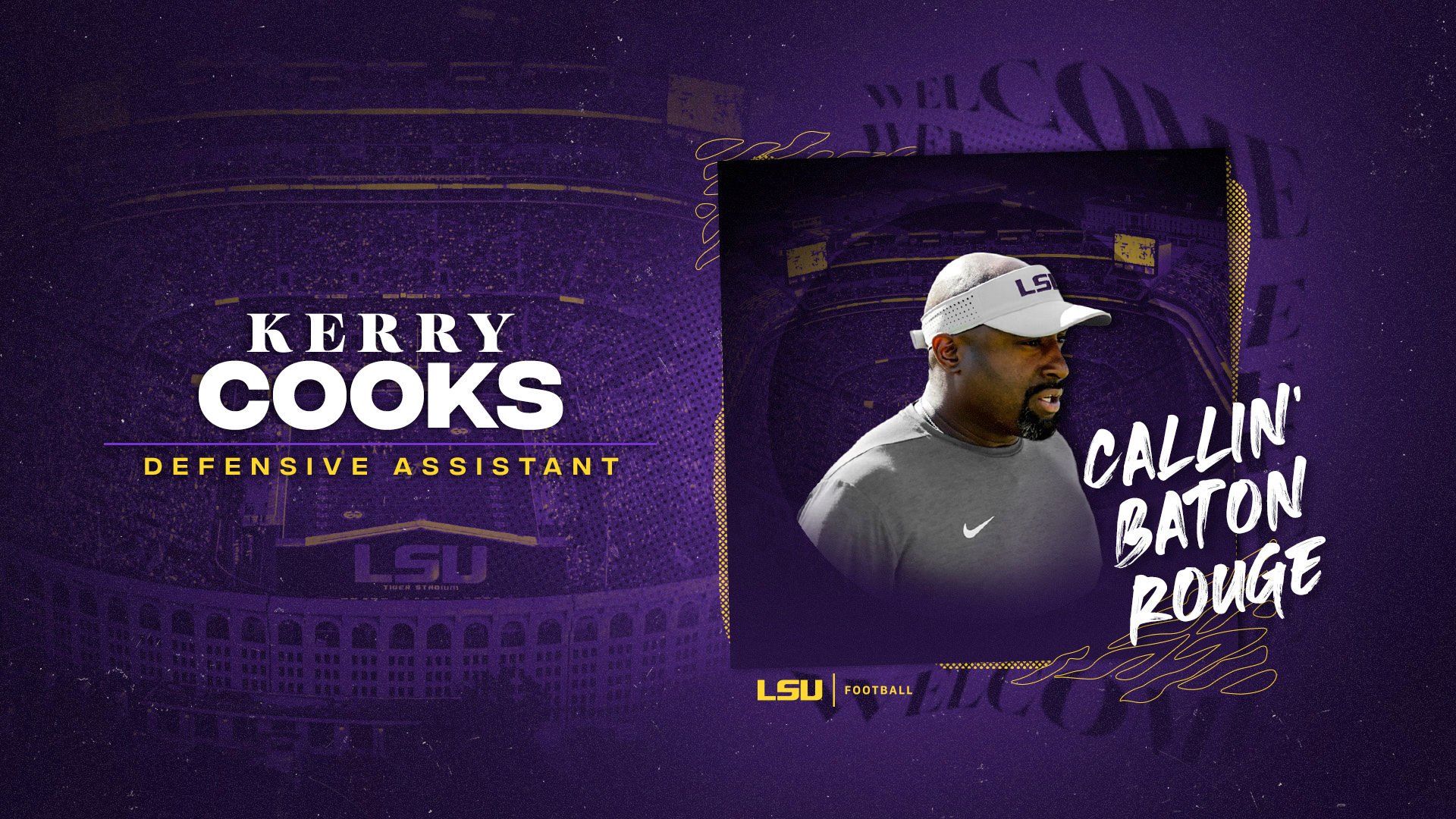 BATON ROUGE – Kerry Cooks, who spent the past two seasons as a defensive analyst at Notre Dame, has been added to the LSU coaching staff, head coach Brian Kelly announced on Friday.

Cooks will coach on the defensive side of the ball.

“I am excited to add a Kerry Cooks to our defensive staff,” Kelly said. “He is a versatile coach and a proven recruiter, and he has a unique ability to empower and inspire student-athletes.  His experience at the highest levels of the game as a player, position coach, and coordinator will be instrumental to our success moving forward.”

Cooks comes to LSU having enjoyed tremendous success as both a player and coach. As team captain at Iowa in 1997, he earned All-Big Ten honors as a defensive back. He was selected in the fifth round of the 1998 NFL Draft by the Minnesota Vikings.

As a coach, Cooks has helped team earn bowl appearances 17 times in 19 years.  He’s also been part of three College Football Playoff appearances with Oklahoma as well as the BCS National Championship Game with Notre Dame.

“I’m honored to have the opportunity to represent the very best football program in the country,” Cooks said. “There are very few places where year in and year out you will be able to compete for it all. The history and tradition of LSU is like no other. I consider it a privilege to be a part of such a special place and program.”

In his most recent stint with the Irish, Notre Dame won 21 games and reached the College Football Playoffs in 2020.  Cooks was also part of Kelly’s first staff at Notre Dame, joining the Irish in 2010. Cooks served on Kelly’s staff at Notre Dame from 2010-14, coaching outside linebackers, cornerbacks and defensive backs during that span. He was co-defensive coordinator for two years (2012-13).

Cooks coached defensive backs at Oklahoma for four years, also serving as assistant defensive coordinator for three seasons. During his four years in Norman, Oklahoma claimed the Big 12 title each season and appeared in the College Football Playoff three times.

As defensive backs coach for the Sooners, Cooks’ secondary consistently ranked near the top of the Big 12 in several passing categories. The Sooners led the Big 12 in fewest passing yards allowed in 2015.

As defensive backs coach at Notre Dame, the Irish boasted one of the nation’s top pass defenses, ranking 15th nationally in interceptions in 2014 as well as a No. 15 ranking for pass defense in 2012. The 2012 Notre Dame defense ranked No. 2 in the nation in yards per completion and allowed only 11 passing TDs all year, a figure that ranked sixth nationally. Notre Dame played in the BCS National Championship game that year.

In four years at Wisconsin, the Badgers won 38 games, appeared in four bowl games, and led the nation in pass efficiency defense in Cooks’ first season on staff in 2006.

Cooks, a native of Irving, Texas, and his wife Elvem are the parents of two daughters, Kerrington and Kenadee.