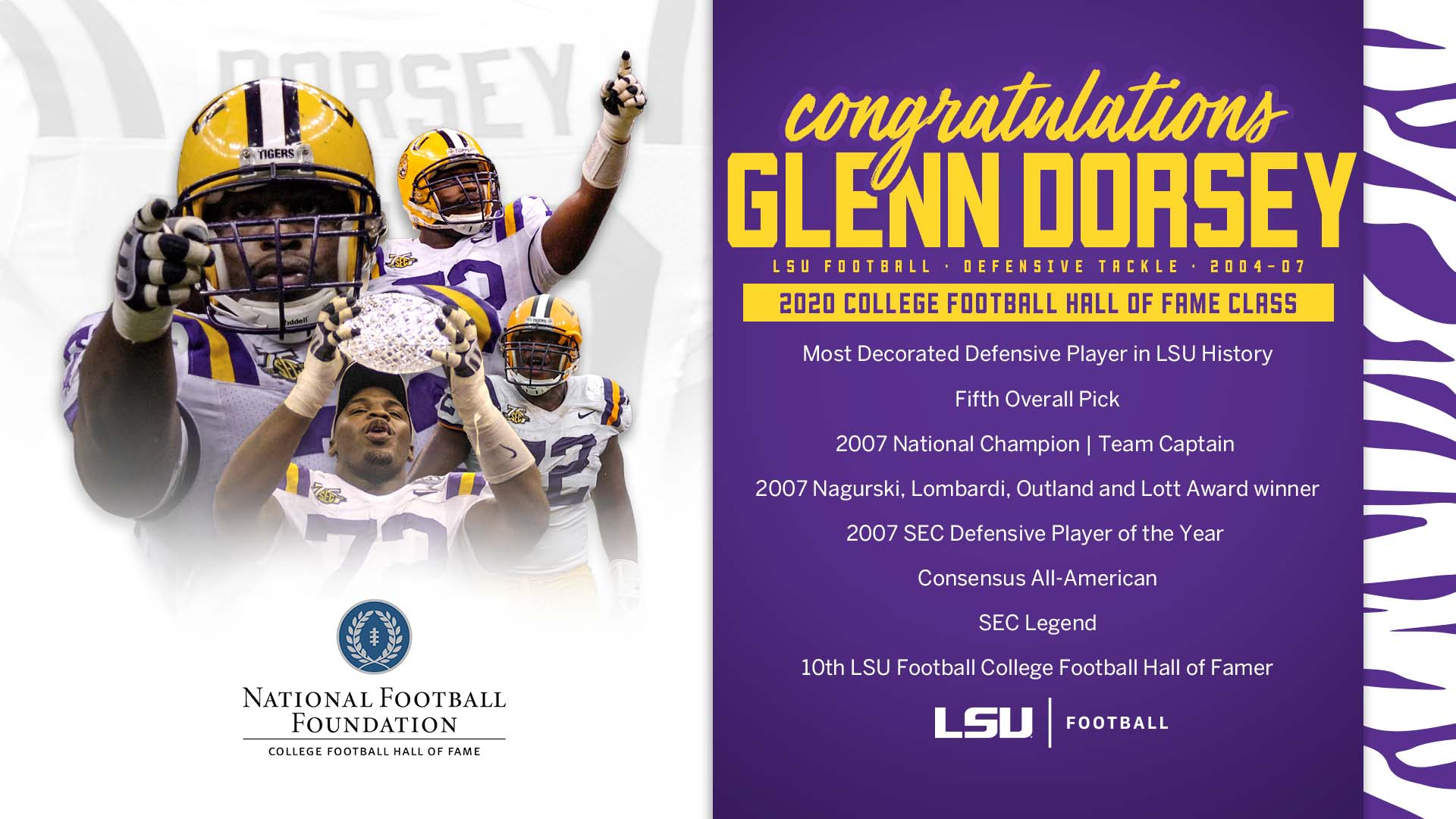 BATON ROUGE — Glenn Dorsey, the most decorated defensive player in LSU history, will be honored on Saturday during the LSU vs. Texas A&M football game for his induction into the College Football Hall of Fame.

The NFF On-Campus Salute, presented by Fidelity Investments, will take place during the first quarter. Dorsey will be presented with a Hall of Fame plaque during the salute and will be joined on the field by LSU Director of Athletics Scott Woodward, Matthew Sign, NFF Chief Operating Officer, and Roger Hobby, Fidelity Executive Vice President.

Kickoff for the LSU vs. Texas A&M game is 6 p.m. and the contest will be televised on ESPN.

“This means the world to me,” Dorsey said in an LSU press release in March 2020. “I can’t thank LSU and my hometown of Gonzales enough for all of their support. We did this together. LSU gave me a chance that ended up changing my life. I can’t express how thankful and thrilled I am about this honor. There are so many people that helped me along the way that made this possible. I’m truly humbled and excited and will forever be grateful to LSU and the opportunities that playing in Tiger Stadium gave me.”

The NFF Hall of Fame On-Campus Salute program, which began with the inaugural College Football Hall of Fame Class in 1951, has become a hallowed tradition, and to this day the singular events remain the first of numerous activities in the Hall of Fame experience.

During the NFF Hall of Fame On-Campus Salutes, each electee returns to his respective school to accept a Hall of Fame plaque that will stay on permanent display at the institution. The events take place on the field during a home game, and many Hall of Famers cite the experience as the ultimate capstone to their careers, providing them one more chance to take the field and be recognized in front of their home crowd.

The 2020 and 2021 College Football Hall of Fame Classes will be officially inducted during the 63rd NFF Annual Awards Dinner Presented by Las Vegas Dec. 7 at the ARIA Resort & Casino Las Vegas. (The 2020 event was canceled due to COVID-19.)

“Despite being double- and sometimes triple-teamed, Glenn Dorsey terrorized offensive lines while becoming the most decorated defensive player in LSU history,” said NFF President & CEO Steve Hatchell. “We are thrilled to honor him in Death Valley.”

A two-time First Team All-American, Dorsey earned unanimous honors in 2007 after leading LSU to a win over Ohio State in the BCS National Championship Game. During his stellar senior campaign, he won the Outland, Nagurski, Lombardi and Lott IMPACT trophies, becoming the first player in Tigers history to receive any of those awards.

A team captain in 2007, Dorsey guided LSU to the conference title while earning SEC Defensive Player of the Year honors and being named a finalist for the Bednarik Award. The two-time First Team All-SEC selection was the leader of one of the most successful four-year periods in LSU history, helping the Tigers to a 43-9 overall record during his career.

Dorsey accumulated 179 total tackles, including 27 for loss and 13 sacks, while playing in 52 games for LSU, including 27 straight starts to end his career in Baton Rouge. He was honored as a member of the SEC Football Legends Class in 2017.

Dorsey, who opted to return to LSU for his senior season despite being projected as a first-round NFL Draft pick as a junior, became the fifth overall pick in the 2008 NFL Draft by the Kansas City Chiefs. He played five seasons with the Chiefs (2008-12) and four with the San Francisco 49ers (2013-16).

Off the field, he established the Glenn Dorsey Foundation, which focuses on teaching youth the importance of education. A motivational speaker, his community activities include donating food and water to flood victims in 2016, furnishing homes for the underprivileged and donating time and money to host Easter egg hunts in Louisiana.

The accomplishments of both classes will be forever immortalized at the Chick-fil-A College Football Hall of Fame in Atlanta, and each inductee will receive a custom ring created by Jostens, the official and exclusive supplier of NFF rings.

Including the 2020 and 2021 Hall of Fame Classes, only 1,038 players and 223 coaches have been inducted into the College Football Hall of Fame from the nearly 5.47 million who have played or coached the game during the past 152 years. In other words, less than two one-hundredths of a percent (.02%) of the individuals who have played the game have earned this distinction.