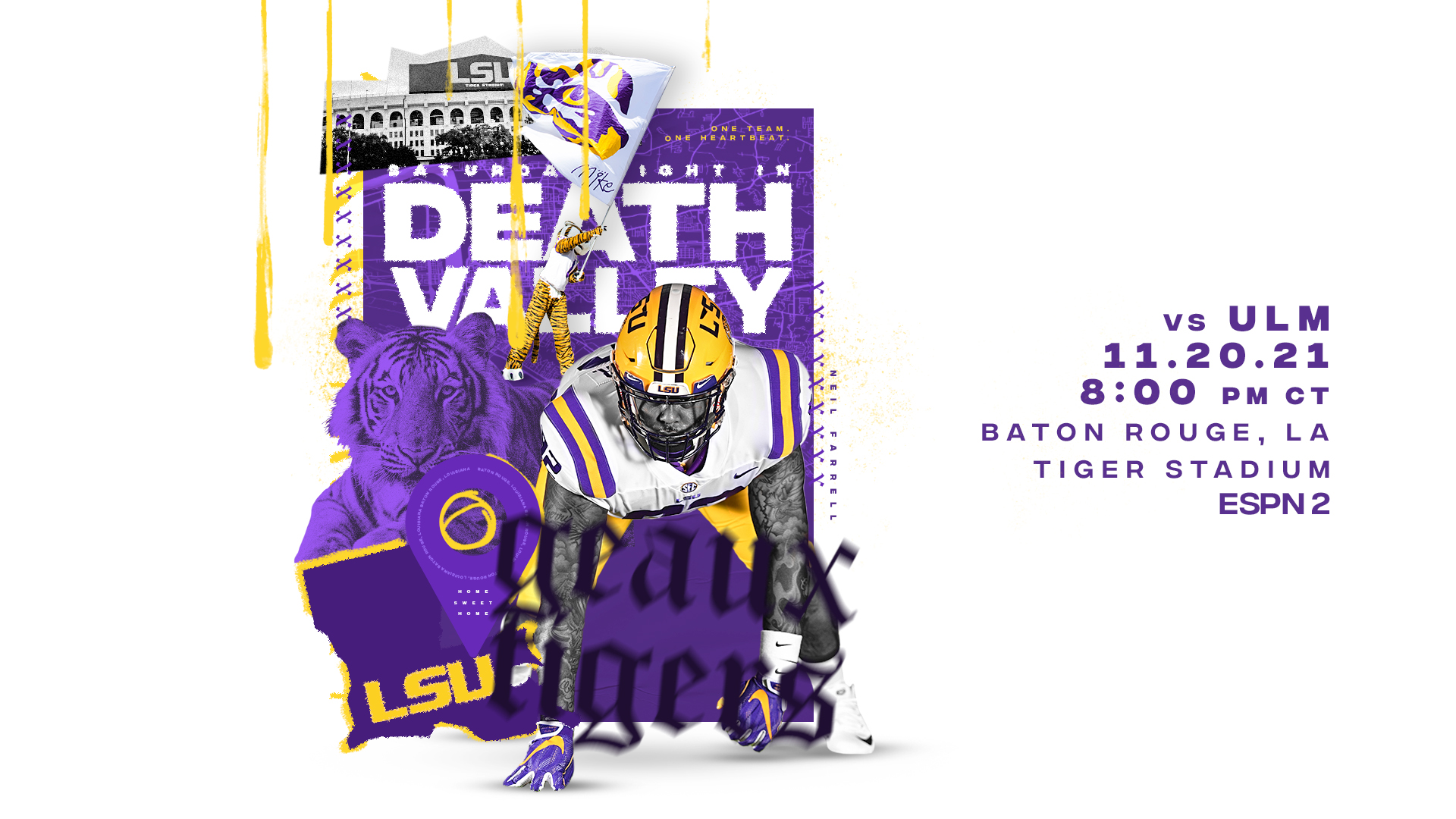 LSU (4-6) looks to finish the season strong in its final two home games, starting with ULM (4-6) on Saturday night.

Kickoff is set for 8:09 p.m. on ESPN2 and the LSU Sports Radio Network.

Wearing white helmets, purple jerseys and white pants, the Tigers will play yet another primetime game in front of the home crowd. It’s looking like a perfect night with temperatures expected to be around 60 degrees at kickoff.

Changing it up on Saturday night 🥶 pic.twitter.com/iaE9aNvZTw

In last Saturday’s 16-13 loss to Arkansas, running back Tyrion Davis-Price eclipsed 100 yards again, rushing for 105 yards on 27 carries. Freshman wideout Jack Bech recorded the Tigers’ lone touchdown, a highlight-reel grab in the back of the end zone.

Head coach Ed Orgeron confirmed that sophomore quarterback Max Johnson will get the nod on Saturday.

It was another solid defensive effort from LSU, holding the Razorbacks to 16 points, behind the play of senior linebackers Micah Baskerville and Damone Clark. Baskerville recorded 12 tackles total with two sacks, while Clark tallied 11 tackles and a sack, adding to the impressive campaign the two veteran linebackers have put together all season.

“They are playing their best football,” Orgeron said of Baskerville and Clark.

Baskerville received a 91.5 grade from Pro Football Focus for his performance against the Hogs, the highest among LSU defenders.

Orgeron also said Thursday that the Tigers will receive some reinforcements with the return of senior offensive guard Ed Ingram and freshman safety Sage Ryan. After a good week of prep, Coach O feels the Tigers are prepared, feeling fresh, and eager to start fast against an in-state opponent.

“I really think the guys have practiced well,” said Orgeron. “Only went one day in pads this week. We should be fresh and ready to go. I feel good about our preparation”

The Warhawks are led by quarterback Chandler Rodgers, who’s accounted for 1,259 yards passing and eight touchdowns this season. Andrew Henry leads the team in receiving with 479 yards and four touchdowns.

The energy and fight has been there for the Tigers over the last few weeks, but the results they’ve wanted have slipped out of their hands.

The defense has shined, and the hope is that the offense will make strides at home in the final two games of the season.

Playing a complete game is at the forefront of LSU’s mind, and they want to make it happen on Saturday night.