Darius Day with one of his eight treys on the night 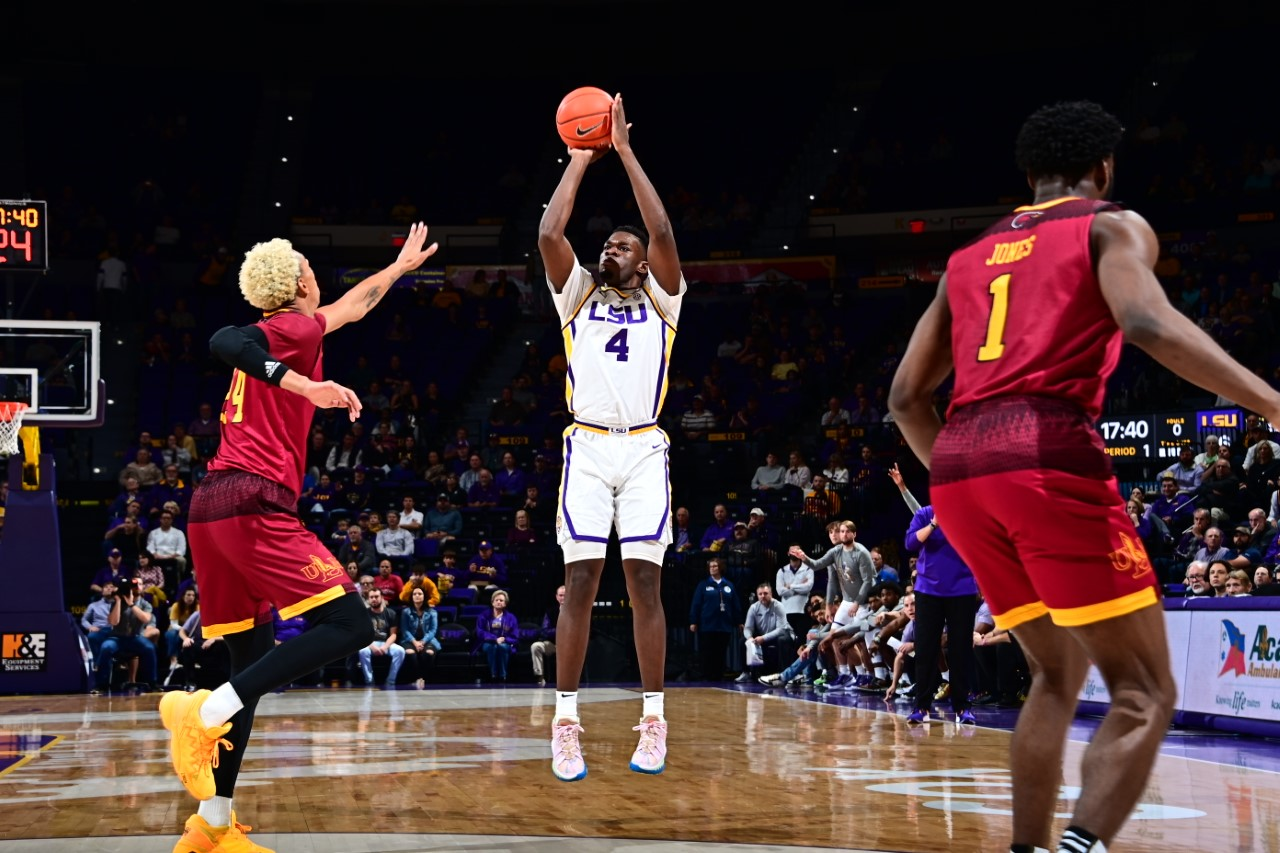 BATON ROUGE – The LSU Tigers used a 26-0 run in the final eight minutes of the half to completely blow open a season opening 101-39 men’s basketball win over ULM Tuesday night at the Pete Maravich Assembly Center.

Senior Darius Days opened his fourth campaign at LSU with an amazing performance, hitting 8-of-9 attempts from the three-point arc and 11-of-13 shots overall. It marked the most three-pointers in the Coach Will Wade era, topping the six made by Tremont Waters on Jan. 30, 2019 at Texas A&M.

The eight treys are tied for the third most in a single game by an LSU player.

Days finished with 30 points in 22 minutes.

Also, in double figures for LSU was freshman Efton Reid with 16 points on 7-of-10 shooting, while sophomore Tari Eason had 11 points and 11 rebounds. Missouri transfer Xavier Pinson and sophomore Eric Gaines each had 10 points and seven assists. Sophomore Mwani Wilkinson had six steals.

The Tigers statistically owned the stat sheet, including 47-26 on the glass with 17 offensive rebounds. LSU had 23 assists on 38 made baskets with 14 steals and seven blocks.

The Tigers big run broke open a close game which saw the Warhawks get a bucket that closed the game to 22-17 for LSU with 9:48 to play in the first half. Neither team scored for nearly two minutes before Days hits a three to start the 26-0 run. LSU ended the final eight minutes of the half, outscoring ULM, 30-3, to go up 52-20 at intermission.

The second half was more of the same as LSU outscored ULM, 49-19.

ULM was led by Thomas Howell with eight points.

An opening night crowd of 9,969 took in the contest with over 2,000 LSU students on hand for the season debut.

LSU is back quickly to work on Friday night at 7 p.m. against Texas State. The game will be broadcast on the LSU Sports Radio Network and streamed on SECN+. Tickets are available online at LSUTix.net.

“Good opening night. First off I want to thank the students. We had over 2,000 students which was incredible and set the tone in the arena. We had just a little less than 10,000 people in the arena tonight. I’m very appreciative of the students and fans for showing up on a Tuesday night and hopefully they comeback.

It took us a minute to settle into the game. (Darius) Days was huge for us. He got hot, which allowed some of our other guys to settle in. (Xavier) Pinson got into a little foul trouble in the first half. I think Days getting hot relieved some of the tension for some of the younger guys. It was an all-around team win. (Eric) Gaines had 14 assists and three turnovers. I think we turned the ball over a bit too much at the end. Tari Eason had a double-double. (Alex) Fudge had five offensive rebounds. Mwani (Wilkinson) had six steals. That’s how our group is, everyone’s going to chip in and contribute. Efton (Reid) was seven-of-10 from the field. You can throw the ball into him and something’s good going to happen. I thought (Brandon) Murray got more comfortable as the game went on. He hit that big shot off that inbounds play. I thought (Jarrell) Colbert did good things when we put him in. I was really pleased. I thought Eason and Gaines gave us great energy. I thought the starting group did a great job of settling in. Just a good team win and excited to be back in the PMAC and that type of environment.”

“The first half turned the game, and you know we were hanging in there somewhat you know staying within distance and then all of a sudden you know three or four threes that he makes and I think a tide turned the crowd got into it and got away from there.”

On the team’s performance tonight…

“We struggled to score against their switching man-to-man defense. We knew that they were going to do it because they did it last year. We worked on it this week but until you play against these guys and their length and quickness that they have while switching, I thought our guards didn’t do a good job of beating them off the dribble when we needed to. Give LSU credit, that’s who they are.”