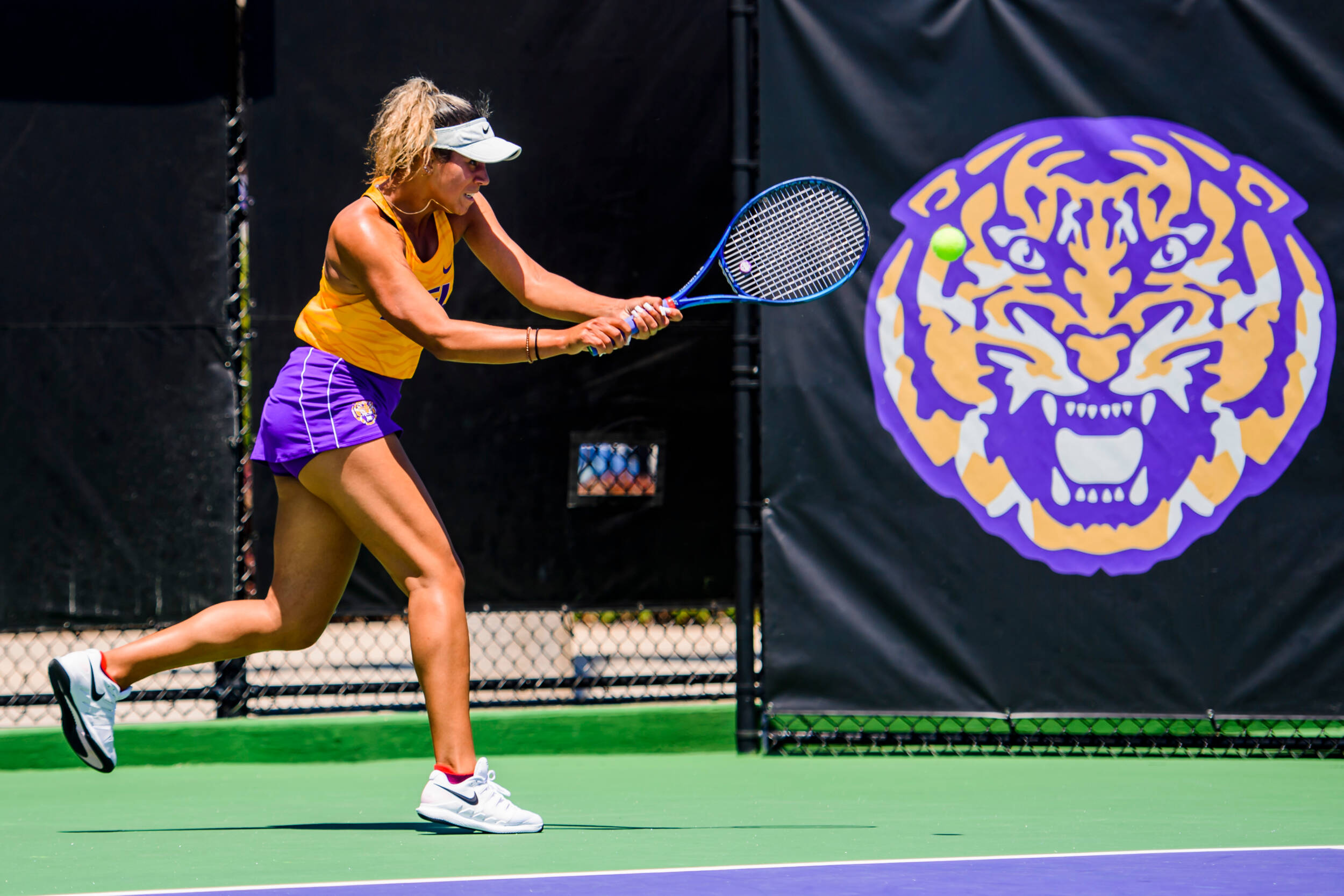 Tuscaloosa, Ala. – Junior Safiya Carrington booked her spot in the semifinal round of the singles bracket of the ITA Southern Regional with a straight set win on Sunday afternoon at the University of Alabama Tennis Stadium.

Doubles – Round of 32
The duo of graduate student Ena Babic and junior Nina Geissler were in second round action against Alabama’s Anna Parkhomenko and Petra Sedlackova. The Crimson Tide team took an early lead in the match and went on to win 8-4 to eliminate the Tiger duo from the main draw.

Carrington and fellow junior Maggie Cubitt faced UAB’s Adela Wasserbauerova and Mackenzie White. The Tiger duo put in a dominant display, dropping only one game in an 8-1 win to advance to the Round of 16.

Graduate students Taylor Bridges and Mia Rabinowitz took on No. 13-seeded Clara Tardivel and Ebru Zeynep Yazgan from Southern Mississippi. Bridges and Rabinowitz maintained control of the match and beat the Golden Eagle pair by a score of 6-3.

Doubles – Round of 16
Carrington and Cubitt were pitted against Rozalie Dohnalova and Viktorie Wojcikova from Northwestern State in their Round of 16 matchup. The Tigers continued their fantastic form in doubles play with an 8-2 win and advanced to the quarterfinal round.

Bridges and Rabinowitz took on Ole Miss’ Lillian Gabrielsen and Reka Zadori in their match. Gabrielsen and Zadori claimed the match by a score of 8-3 to move on to the next round.

Doubles – Quarterfinals
Carrington and Cubitt faced Loudmilla Bencheikh and Anne Marie Hiser from Alabama in the quarterfinal round. The two teams contested a back and forth affair, with Bencheikh and Hiser able to pull ahead at the end of the set and to win 8-6 and move on to the semifinal round.

No. 10-seed Babic took on Alabama’s Ola Pitak. Babic strongly claimed the first set 6-2 before edging Pitak in an extended 7-5 second set to book her spot in the Round of 16.

Cubitt faced the No. 15-seeded Nikola Kohoutova from South Alabama. Cubitt grabbed the first set by a tight 6-4 scoreline before winning the second 6-3 to clinch the straight set victory and a spot in the next round.

No. 5 seed Carrington faced Mississippi State’s Alexandra Mikhailuk in her second-round match. The first set was back and forth, with Carrington narrowly winning 7-5. Mikhailuk responded with a strong second set win, 6-2, and forced the match to a decisive third set. Carrington held firm, outlasting Mikhailuk to win the third set 7-5 and advance to the Round of 16.

Rabinowitz was the last Tiger in second round action, taking on Michelle Ncube from Troy. Rabinowitz opened with a strong 6-2 win in the first set and completed the straight set win with a 6-3 win in the second.

Singles – Round of 16
Carrington opened the Round of 16 with a match against Tulane’s Lahari Yelamanchili. Carrington dominated the first set and won 6-1 before she completed the straight set win with a 6-2 win in the second to advance to the quarterfinal round.

Rabinowitz matched against Auburn’s Ariana Arsenault. The two contested an even first set, with Arsenault edging Rabinowitz by a score of 7-5. The second set also went the way of Arsenault, who won 6-3 and advanced to the next round.

Babic also faced an Auburn opponent in her Round of 16 in the form of Georgie Axon. Babic strongly won the first set 6-2 before Axon edged the second set by a score of 6-4. The third set was back and forth and required a tiebreaker to decide the winner, where Babic pulled ahead and grabbed the final few points to win the tiebreaker 7-5 and advance to the quarterfinals.

The final Tiger in the Round of 16 was Cubitt and she faced Ole Miss’ Zadori. Zadori won the first set 6-3 and repeated the scoreline in the second to claim the win.

Singles – Quarterfinals
Babic faced No. 1-seeded Antonaki from Mississippi State in the first quarterfinals match. Antonaki won the first set 6-3 before Babic replied with a 6-3 win of her own in the second set to force a third. Antonaki recovered from her second set defeat to win 6-1 and advance to the next round.

Carrington took on Mississippi State’s Tamara Racine to end the day. Carrington claimed a gritty first set by a score of 6-4. The second set was another tight contest, with Carrington pulling ahead at the end to win 7-5 and book a spot in the semifinal.

Up Next
Carrington will face Alabama’s Sedlackova in the semifinal round at 1 p.m. CT on Monday.