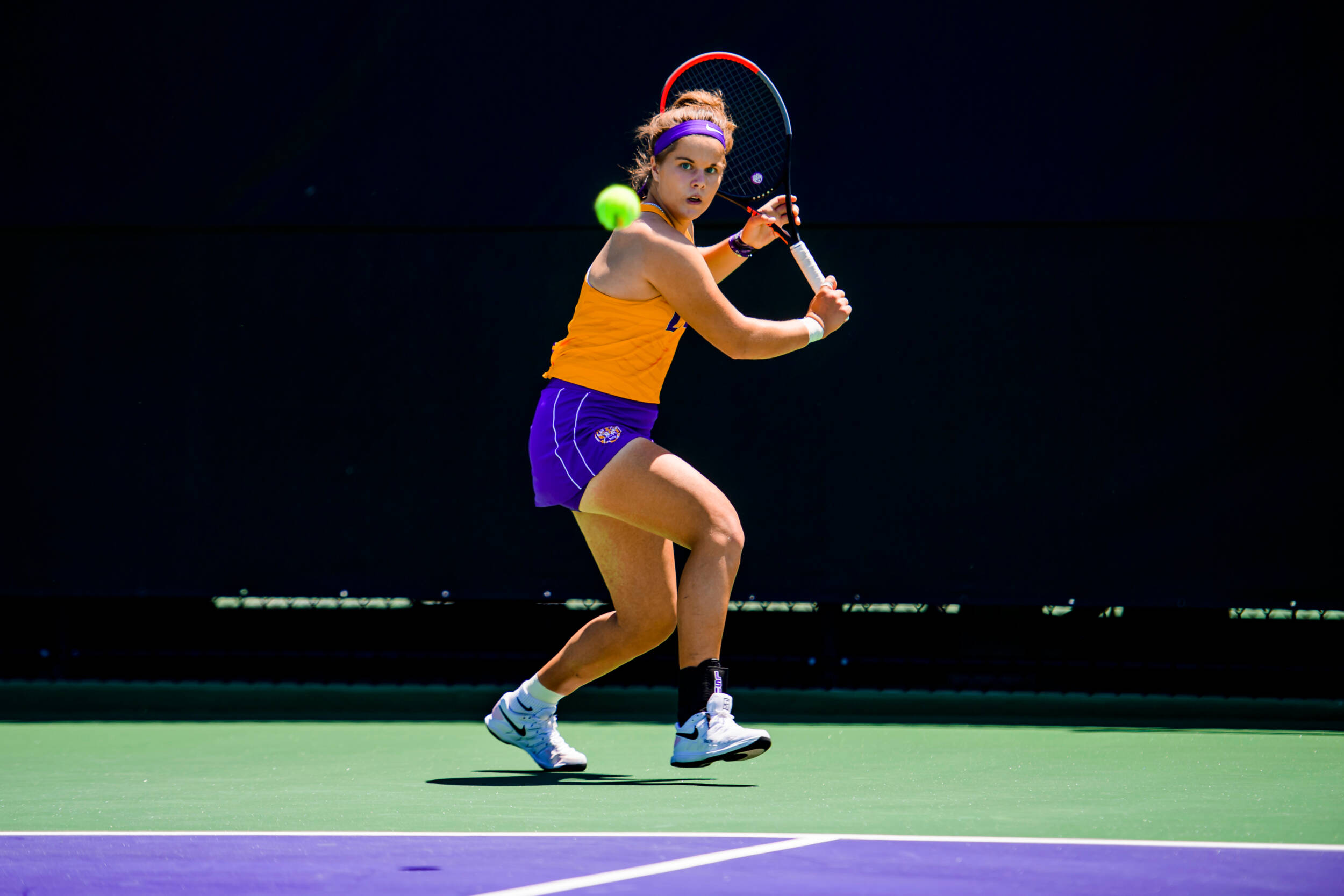 Tuscaloosa, Ala. – The LSU Women’s Tennis team went a perfect 6-0 in main draw competition to start their campaigns in the ITA Southern Regional on Friday at the University of Alabama Tennis Stadium.

Singles Qualifying
In the first round of the singles qualifiers on Thursday, freshman Shaye Longwell faced off against Jackson State’s Ella Tuomela. Tuomela claimed the first set by a close margin of 6-4 before taking set two by a score of 6-3 to advance to the second round.

Singles Consolation
Longwell drew McNeese State’s Ariane Monlleo Sanchis in her consolation match on Thursday afternoon. Longwell took the first set by a score of 6-3 before holding off Sanchis in the second set to win 6-3 and claim the first singles win of her collegiate career.

Longwell’s Friday match saw her draw Alcorn State’s Veronica Rodriguez. Rodriguez won the first set by a score of 6-2 and went on to claim the second set 6-3.

Doubles Main Draw
Due to a regional ranking in the Top 16, the Tiger duo of Ena Babic and Nina Geissler and the junior pair of Safiya Carrington and Nina Geissler earned a first round bye and will start their quests in tomorrow’s Round of 32.

The new pairing of graduate students Taylor Bridges and Mia Rabinowitz were in action in the first round as they faced Jackson State’s Anna Syrova and Balsen Kaya. The Tiger duo played a near-perfect match as they defeated Syrova and Kaya by a score of 8-0.

Singles Main Draw
No. 5-seeded Carrington faced Alabama’s Kasia Pitak in the first round. Carrington and Pitak played a close first set that saw Carrington pull out a 6-4 win. In the second set, Carrington maintained control of the match and won 6-2 to advance to the second round.

In her first-round matchup, Geissler faced Otoha Aoki of South Alabama. Geissler claimed a gritty first set by a score of 6-4 before strongly winning the second, 6-2, to advance to round two.

No. 10-seeded Babic took on Tulane’s Lily Walther. The Green Wave struck first and claimed the first set by a score of 6-4 before Babic struck back and claimed the second set with her own 6-4 win. Babic carried momentum from her second set win and blanked Walther in the third set, 6-0, to book her place in the next round.

Cubitt’s first round opponent was Mikaela Konstantinova from Alcorn State. Cubitt put in a dominant display, claiming the first set 6-2 before blanking Konstantinova 6-0 in the second to advance to round two.

The final match of the day saw Rabinowitz take on the No. 9 seed Magda Adaloglou from Mississippi State. Rabinowitz edged Adaloglou in the first set by a score of 6-4 and repeated the scoreline in the second to claim a straight set win and her spot in the next round.

Up Next
Day 3 of the ITA Southern Regional will consist of two rounds of doubles and one round of singles and will kick off at 9 a.m. CT on Saturday morning.