Ty Davis-Price posted the greatest rushing performance in school history on Saturday, but he didn’t want much of the credit. 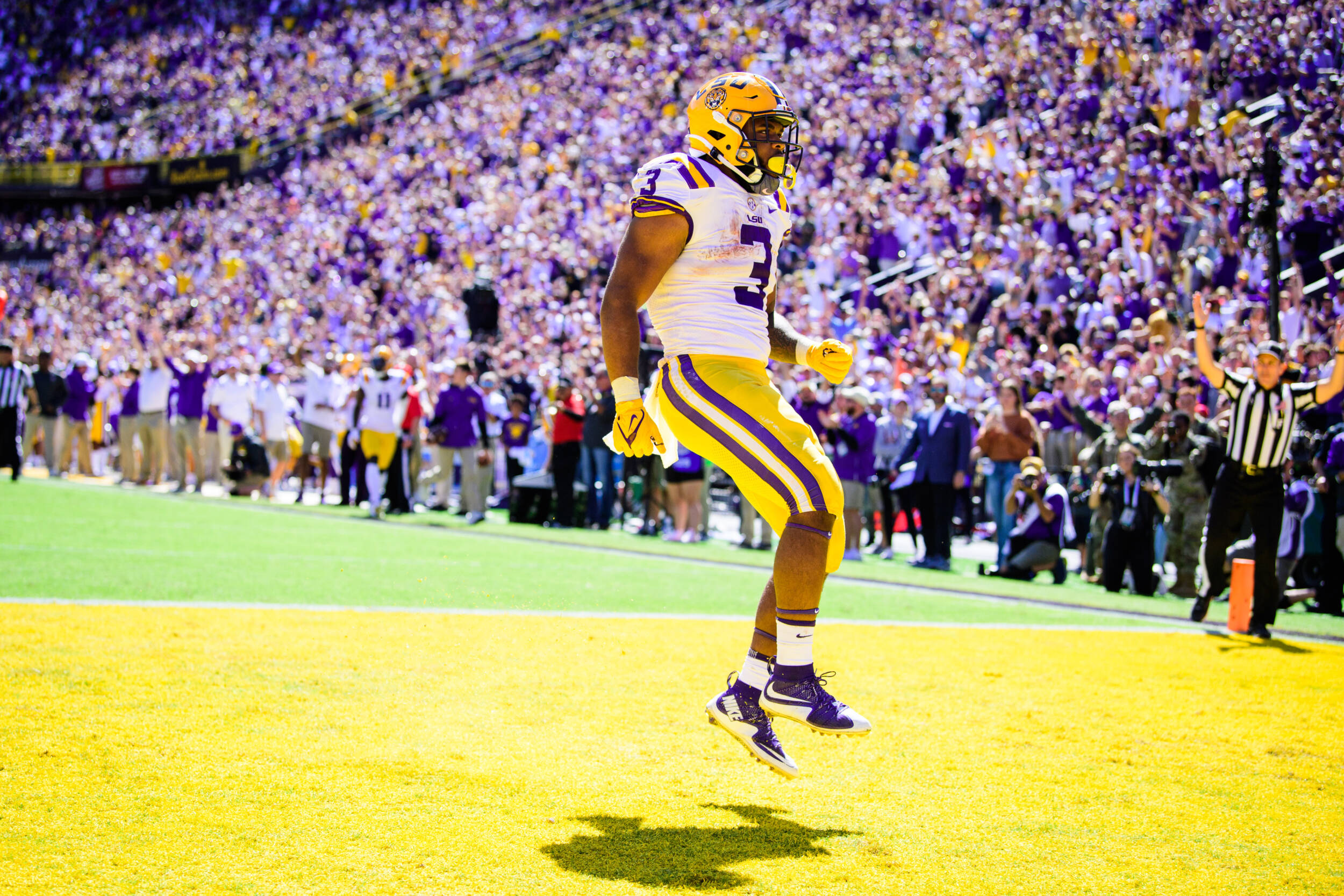 Ty Davis-Price didn’t realize how many yards he had until after the game.

In his mind, he was still running.

His record-setting day of 287 yards and three touchdowns on 36 carries finished as the greatest rushing performance in school history, but he didn’t want much of the credit.

The credit went straight to his offensive line, who he says deserves something nice after Saturday’s performance, leading the Tigers over No. 20 Florida, 49-42.

Davis-Price, much like LSU’s offensive line, internalized the criticism and unleashed it on defenders, running like a man on fire with something to prove.

“I was just amazed at how well the offensive line did,” Davis-Price said postgame. “Those were big holes that I ran through. Shoutout to them, for working hard each and every day. It was a great win for the team.”

The GREATEST rushing performance in LSU history. Have a day @TyDavisPrice! pic.twitter.com/HUovFFMonY

He showed promising strides against Kentucky last week, but Davis-Price was only averaging 3.02 yards per touch until the Tigers went to Lexington. On Saturday against a top-20 opponent, he nearly tripled that, averaging eight yards per carry. He was seeing green grass all day through his facemask.

The 6-foot-1, 223-pound tailback credited Director of Performance Innovation Jack Marucci with LSU’s recent emergence in the running game. Marruci has provided the running backs with specific data — charting every run the Tigers have used this year — detailing sets and schemes that set up LSU best for success.

The LSU offensive line has been through a lot this season, but they posted their best performance to date, dominating the line of scrimmage, creating running room for Davis-Price from start to finish. Many inside the building have seen signs of growth from that unit, and they finally clicked on all cylinders Saturday.

“We’ve definitely had our struggles, but it felt like we’ve been right there,” said Liam Shanahan postgame. “To put it together today, with a performance like that running the ball, it feels great.”

Quarterback Max Johnson’s first pass of the fourth quarter came with 3:30 left in the game, a clutch touchdown on 4th-and-1 to Jaray Jenkins. There was a commitment to the run. LSU was going to run it until you stopped it, but Davis-Price wasn’t going to let that happen.

“The reason why I didn’t throw the ball much in the fourth quarter is because our offensive line was dominating,” Johnson said. “Shoutout to those guys. Shoutout to Ty Davis-Price.”

Head coach Ed Orgeron said on Thursday that this was LSU’s best week of preparation they’ve had all season. Senior leader Andre Anthony held a players-only meeting on Monday. That’s all great, but it only means something unless it transfers over to the game, and the Tigers came out on fire for an unusual morning kickoff in Death Valley.

“He told it like it was,” Clark said on Anthony’s meeting. “We needed that. He told us to go out there and play for one another, and that’s what we did.”

Johnson had a conversation with Jenkins before the game about ways to get him the ball, preferably in the end zone. Whatever the message was, it was well received, as Jenkins recorded three scores on four catches for 50 yards, a career day for one of the Tigers’ returning wideouts.

His third Touchdown of the game! pic.twitter.com/vFGiVTATMB

Defensively, sophomore BJ Ojulari and senior Neil Farrell forced pressure and created havoc on the defensive line. Ojulari recorded nine tackles, a sack, a pass breakup, while Farrell tallied seven tackles and a tackle for loss. His head coach categorized Farrell’s performance as “his best as a Tiger.”

Glen Logan returned from injury and had three tackles, too, making his presence felt up the middle. Orgeron believes Logan compliments Farrell perfectly, and the two make each other better.

“They have been playing together for four years,” Orgeron said. “He and Glen (Logan) are talking all the time out there. With Glen Logan playing, there was less holes in the middle. It enabled Neil to make more plays. I attribute that to him and his buddy playing side by side.”

If there’s one certainty in an otherwise unpredictable contest, it’s to expect the unexpected. Saturday was no different, marking the highest-scoring contest between the two programs in their long, storied history.

The Tigers will enjoy this one, no question, but make no mistake: they want to build off this win. LSU came to fight Saturday, and they’ll keep fighting until there’s nothing left to fight for.

“We knew it was going to be a battle,” Orgeron said. “They came to fight today. That’s our motto. We’re going to fight the rest of the season. One day at a time. One game at a time.”