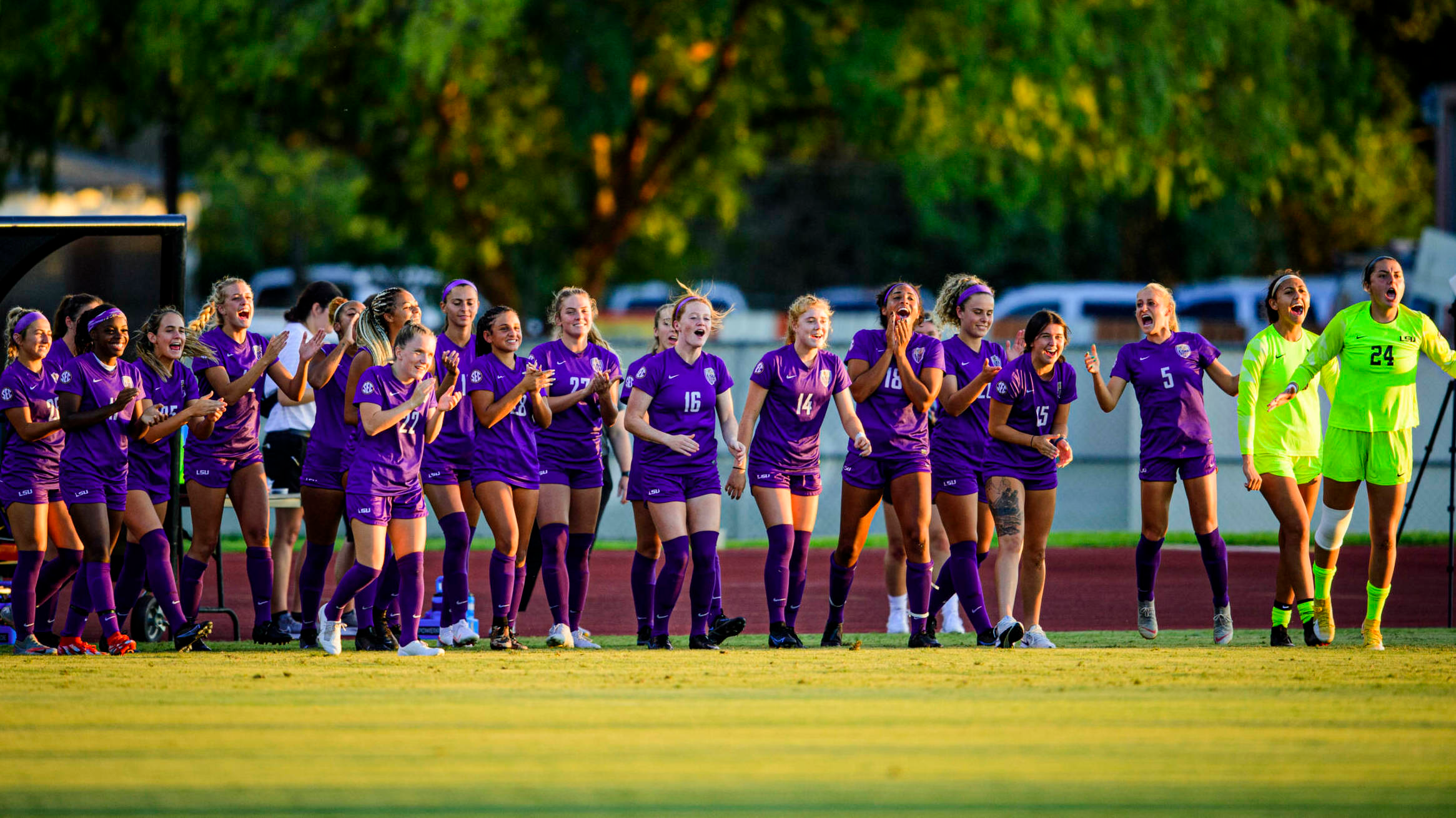 Series History
LSU has traditionally dominated this series winning 20 of the previous 26 matches while also earning three draws. However, Mississippi State did grab a W last year in Starkville by a score of 2-1, so the Tigers will be looking to avenge that loss.

Three current Tigers have scored against the Bulldogs in previous matches. Molly Thompson scored a goal in LSU’s match versus Mississippi State in 2018 that helped the Tigers to a 2-1 win. Meghan Johnson and Rammie Noel tallied both of LSU’s two goals in a 2-2 draw in 2019, and Noel added another goal against the Bulldogs. Taylor Dobles and Maddie Moreau picked up the assists on Noel’s goal last year. Two of Noel’s three career goals have come against Mississippi State.

Tigers Win
Head coach Sian Hudson joined Cody Worsham on Tigers Win this week to discuss all things LSU Soccer and what has led to their No. 6 ranking in the country. Visit lsusports.net for the full podcast.

Promotions
LSU soccer will be giving out scarves to the first 150 fans through the gates on Friday night; gates open at 6 p.m. $1 hot dogs will also be available at the concession stands and it is Youth Soccer Night. LSU soccer will also recognize former alums during halftime.

The Tigers capped off the 2021 spring season with wins over Florida, Baylor and Texas Tech. Wins against Southern Miss, Sam Houston, No. 15 USF, No. 19 UCF, Arizona, No. 19 Arizona State, and ULL have pushed the streak to 10.

LSU is outscoring its opponents 30 to 5 on this dominant win streak. The Tigers are one of 13 teams left in the country to have won all of their games during the 2021 fall season.

Off To A Hot Start
LSU’s 26 goals through seven games rank as the 9th most in the NCAA this season. Tinaya Alexander (6) and Alesia Garcia (5) are the team leaders in goals scored. Molly Thompson (4), Athena Kuehn (3) and Maddie Moreau (2) have scored multiple goals while Meghan Johnson, Rammie Noel, Lindsi Jennings, Grace Haggerty, Jordan Johnson, and Wasila Diwura-Soale all have one apiece. The scoresheet shows a distribution of wealth for the Tigers offensively; LSU is a side that has numerous players that can put the ball in the net. LSU’s 11 goal scorers on the season are the third most in program history. In 2003, 14 different players scored, and in 2002 13 players scored.

Strength of Schedule
LSU has been putting up gaudy numbers, but it hasn’t been just against inferior opponents. As mentioned, LSU has three ranked wins this season, and the Tigers’ opponents have a win percentage of .679 when not playing LSU. It has LSU’s schedule ranked as the 16th toughest in the nation this season.

Some Stats
LSU’s scoring offense of 3.71 goals per game ranks No. 6 in the country and second in the SEC. Tinaya Alexander’s point total of 15 ranks tied for No. 22 in the NCAA, and No. 4 in the SEC. Mollee Swift has lowered her GAA to 0.52, which ranks as the second lowest in the SEC and her save percentage of .897 ranks 20th in the nation.

Teamwise, LSU is averaging eight corner kicks per game which ranks 12th nationally, and the Tigers’ 20.43 shots per game rank No. 18 in the nation.

Tigers On A Roll
The Tigers have been on a roll as they’ve won 15 of their past 18 games only dropping two contests in that span, which ranges back to the 2020 SEC Tournament. In that span, LSU has outscored its opponents by a total of 41 to 10, and LSU has scored two or more goals in 12 of those 18 contests.

The defensive unit has been superb in this 18 game span that has the Tigers ending up on the winning side more oft than not. In those 18 games, the Tigers have registered 10 shutouts while only allowing two or more goals in a game twice in that span.

Deep Roster
It helps to have depth, especially in collegiate soccer. The Tigers have shown that off this year as 26 players have earned playing time. Seventeen of the 26 have played in all seven matches, but the most important part is the Tigers have been able to spread minutes out thanks to their depth. Fresh legs win games late, and the Tigers have that on their side this year.

SEC Play
LSU holds an all-time record of 88-138-34 against SEC opponents during conference play. The Tigers are looking for their first winning record in conference play since they went 5-4-1 in 2018. The Tigers went 0-6-2 last season in conference play before reeling off wins against Alabama and No. 14 Ole Miss at the SEC Tournament, and a neutral site win over Florida in the spring of 2021.

Under Coach Hudson
LSU has a record of 15-8-3 under head coach Sian Hudson through 26 games for a win percentage of .634. The Tigers are 13-1-1 all-time under Hudson when they score first, and listen to this next stat. In games where LSU scores two or more goals, which has happened 13 times in the 26 matches, the Tigers are 12-0-1.

Scouting Mississippi State
Mississippi State comes into the match having played six games on the year with a record of 2-2-2. This will be their first match since Sept. 5 as their previous two matches were postponed due to COVID-19 protocols. The Bulldogs have scored five goals on the season while conceding four times. Onyi Echegini is the team leader with five points thanks to two goals and an assist. The Tigers and Bulldogs have two common opponents this year – ULL and Arizona State. MSU beat ULL 2-0 and lost to ASU 1-0.