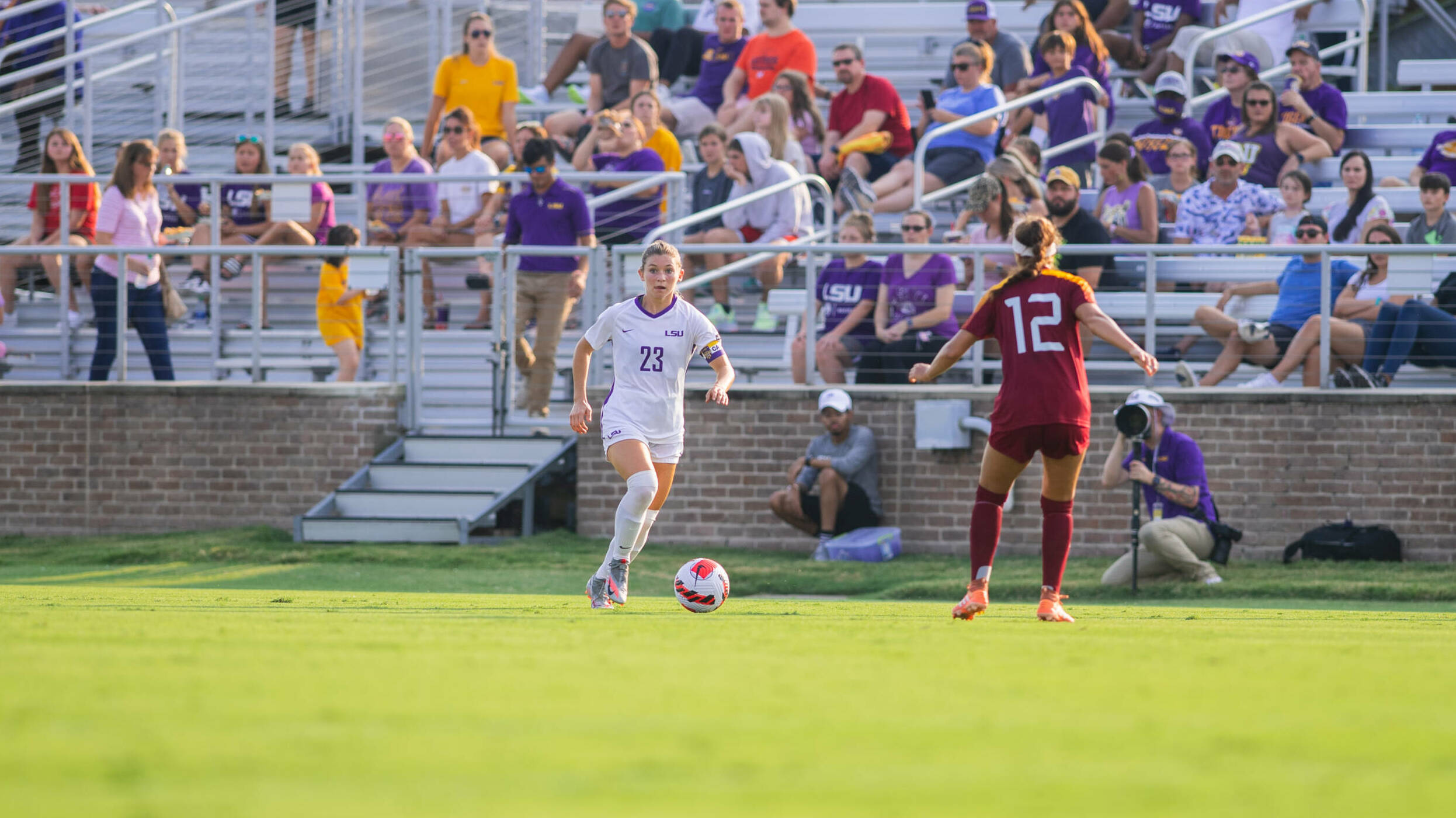 Baton Rouge, La. – The 7th ranked LSU soccer team (6-0-0) will travel to Lafayette, La., for its final nonconference matchup of the regular season on Thursday night as they take on ULL at the Ragin’ Cajuns Soccer Facility. Admission will be free.

Series History
This will be the 10th meeting between the two schools and LSU has won all nine of the previous matches against ULL. The series started in 2000 with a 4-0 win for LSU, and the last match took place in Lafayette in 2011, a 3-0 win for the Tigers.

On The Road
This will be the final of a five game road swing for the Tigers that dates back to its contest at USF on August 26. The Tigers picked up wins over No. 15 USF (August 26) and No. 19 UCF (August 29) in Florida before defeating Arizona (Sept. 2) and No. 21 Arizona State (Sept. 5) last week. The wins over USF and UCF marked the first time in program history that LSU won back-to-back ranked games in a span of four days, and it’s the second time that LSU has won two consecutive games against ranked opponents.

Streaking Tigers
LSU is on a nine game win streak dating back to the spring of 2021. The Tigers capped off the 2021 spring season with wins over Florida, Baylor and Texas Tech. Wins against Southern Miss, Sam Houston, No. 15 USF, No. 19 UCF, Arizona, and No. 19 Arizona State have pushed the streak to nine.

The nine game win streak has matched the LSU record for nine straight wins that occurred in the early portion of the 2002 season.

Off To A Hot Start
LSU’s 21 goals through six games rank as the 7th most in the NCAA this season. Tinaya Alexander and Alesia Garcia share the team lead for LSU with five apiece. Athena Kuehn (3) and Maddie Moreau (2) have scored multiple goals while Rammie Noel, Lindsi Jennings, Molly Thompson, Grace Haggerty, Jordan Johnson, and Wasila Diwura-Soale all have one apiece. The scoresheet shows a distribution of wealth for the Tigers offensively; LSU is a side that has numerous players that can put the ball in the net.

Strength of Schedule
LSU has been putting up gaudy numbers, but it hasn’t been just against inferior opponents. As mentioned, LSU has three ranked wins this season, and the Tigers’ opponents have a win percentage of .769 when not playing LSU.

Some Stats
LSU’s scoring offense of 3.50 goals per game ranks No. 12 in the country and third in the SEC. Tinaya Alexander and Alesia Garcia’s point totals of 12 rank tied for No. 20 in the NCAA, and No. 5 in the SEC. Mollee Swift’s GAA of 0.57 ranks No. 3 in the conference and her save percentage of .885 ranks 35th nationally.

Teamwise, LSU is averaging eight corner kicks per game which ranks 15th nationally, and the Tigers’ 20.50 shots per game rank No. 21 in the nation.

Tigers On A Roll
The Tigers have been on a roll as they’ve won 14 of their past 17 games only dropping two contests in that span, which ranges back to the 2020 SEC Tournament. In that span, LSU has outscored its opponents by a total of 36 to 10, and LSU has scored two or more goals in 11 of those 17 contests.

Each year features a new team, but without a doubt LSU’s strong finish in the spring season of 2021 has carried over and boosted confidence for a squad that knows they can compete at a high level now. The Tigers returned a large majority of their points from the 2020-21 season to this year’s squad, and they have added several key transfers that will play big minutes this fall.

The defensive unit has been superb in this 17 game span that has the Tigers ending up on the winning side more oft than not. In those 17 games, the Tigers have registered nine shutouts while only allowing two or more goals in a game twice in that span.

Scouting ULL
ULL comes into the game with a record of 2-4-0 on the season. The Ragin’ Cajuns have scored three goals on the season while allowing 15. Libby Harper has started all six games in net for ULL and has a GAA of 2.56.