Life On The Road 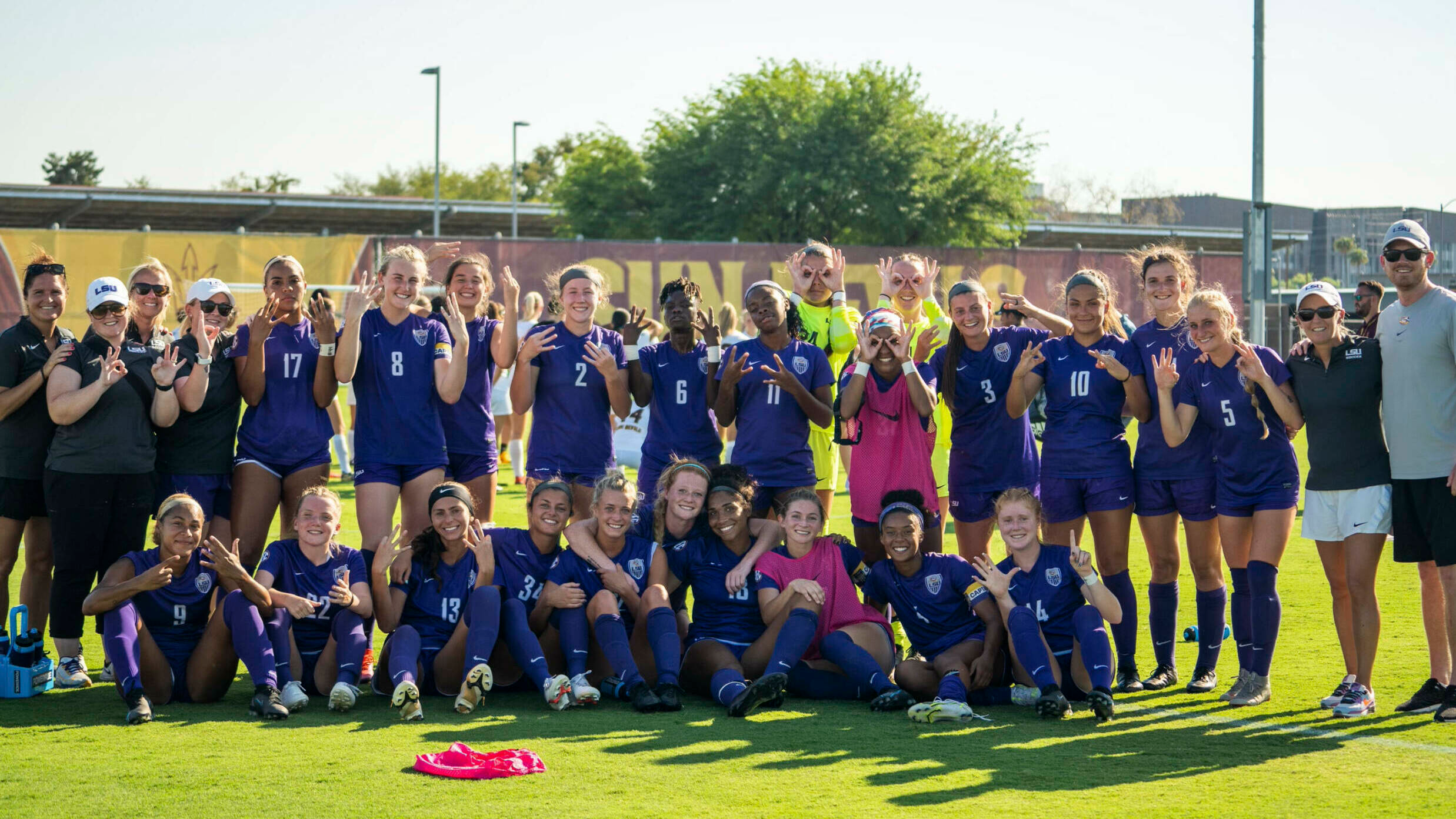 A thirteen day trip. Four road wins, three over Top 25 opponents. It’s a trip that has solidified and confirmed LSU’s belief that it can be an elite team. The Tigers are on the rise and roaring, that’s for sure.

“I think the girls managed this two-week stretch so well,” head coach Sian Hudson said after the trip. “Obviously with the hurricane back home and family being affected, they were just so mature with their preparation. To get that performance on Sunday {a 5-2 win over No. 21 Arizona State} after a long stretch on the road is a testament to our team unity.”

When LSU left Baton Rouge on August 25, the program had three true road wins over Top 25 ranked opponents in its history and was unranked. The Fighting Tigers returned to Louisiana on Monday having doubled that number to six and a definite rise in the rankings is set to come on Tuesday. The Tigers are ranked No. 17 as of Monday (September 6).

First it started with some late game dramatics for a win over No. 15 USF on August 26. With the game all knotted at one in the 90th minute, Louisiana native Maddie Moreau founder herself on the end of a cross from Rammie Noel, another fellow Louisianan. Moreau took a composed touch and slotted the ball in the net with 31 seconds remaining to give LSU a 2-1 victory.

In the meantime a life-altering hurricane was forming in the Gulf of Mexico. The Tigers remained in Florida while Hurricane Ida was developing into one of the strongest hurricanes to ever make landfall in the United States. On the day Ida made landfall, LSU had a match against No. 19 UCF in Orlando. The message to the team was simple – play for each other and the state of Louisiana. And that they did as they proceeded to shutout UCF by a tally of 2-0 as the impending doom of Hurricane Ida weighed on them, especially those who grew up in hometowns that were in the path of the hurricane. Molly Thompson, a native of Houma, scored one of the goals in that 2-0 win over UCF when the hurricane hit.

Her words after the game echoed the sentiment of the team. “Today we were playing for something bigger than ourselves. We know what is going on in Louisiana and our thoughts and prayers are with all of those who are being impacted by this storm.” LSU soccer will announce plans for gathering items for those affected by Hurricane Ida in the coming days. “We will do everything in our power once we get home to offer our support and help to the state of Louisiana,” Hudson said following the game.

The Tigers stayed over an extra day in Orlando before travelling straight to Phoenix for two more tough games in the heat. Much of what the Tigers were able to do on the 13 day trip were thanks to Renee Balconi (strength & conditioning) and Hannah Faldetta (athletic trainer). Balconi’s preseason workouts and regimen had the Tigers in tip-top shape, and Faldetta organized recovery treatment schedules for the whole team on the trip while encouraging the student-athletes to stay well hydrated and rested.

LSU touched down in Phoenix on Tuesday night (August 31) with a full day to prepare before they were set to take on Arizona in a neutral site match in Tempe. Some recovery Wednesday morning followed by a light practice on Wednesday afternoon had the Tigers prepped for their showdown with the Wildcats. LSU came out and produced a workmanlike 2-0 victory over Arizona to kick the month of September off the right way.

It was a sweltering day on the pitch to close out the roadtrip as temperatures reached 104 degrees Fahrenheit against No. 21 Arizona State. It was a battle of unbeaten teams, both of which had a knack of putting goals in the net as they were both ranked inside the top 10 of the NCAA in scoring offense. A goal 38 seconds into the match for ASU might have caused some panic amongst most teams, but LSU, just as resilient as its home state, came fighting right back. Five unanswered goals later and the Tigers settled in with a commanding win to close out the trip. The final outcome of the game was a 5-2 victory for the Tigers. The five goals against a ranked opponent were the second most in program history, and LSU’s three wins over ranked opponents this season are the most in a single year in program history. And there’s still a month and half left of the regular season.

“This team has so much grit and so much will to them,” midfielder Lindsi Jennings said after scoring her first goal for LSU in the win over Arizona State. “It’s super special to be a part of something like this.

“Everybody on this team works so hard together. It’s not individualized; we are in this together. The momentum we have right now is incredible.”

LSU has one remaining nonconference contest on the schedule, a match against ULL on September 9 in Lafayette. A night that could result in history if LSU were to win as the Tigers have won nine straight games to match the school record that was set in 2002.

After that the Tigers open up SEC play by hosting Mississippi State at LSU Soccer Stadium on Friday (September 17). LSU enthusiasts, soccer fans or not, owe it to this team to come out and support; every LSU soccer home game during the regular season is free admission. This team is fun to watch play and you won’t be disappointed. Give em a chance and you’ll be hooked. Bring the family. Come out, be loud, and celebrate the Purple and Gold.