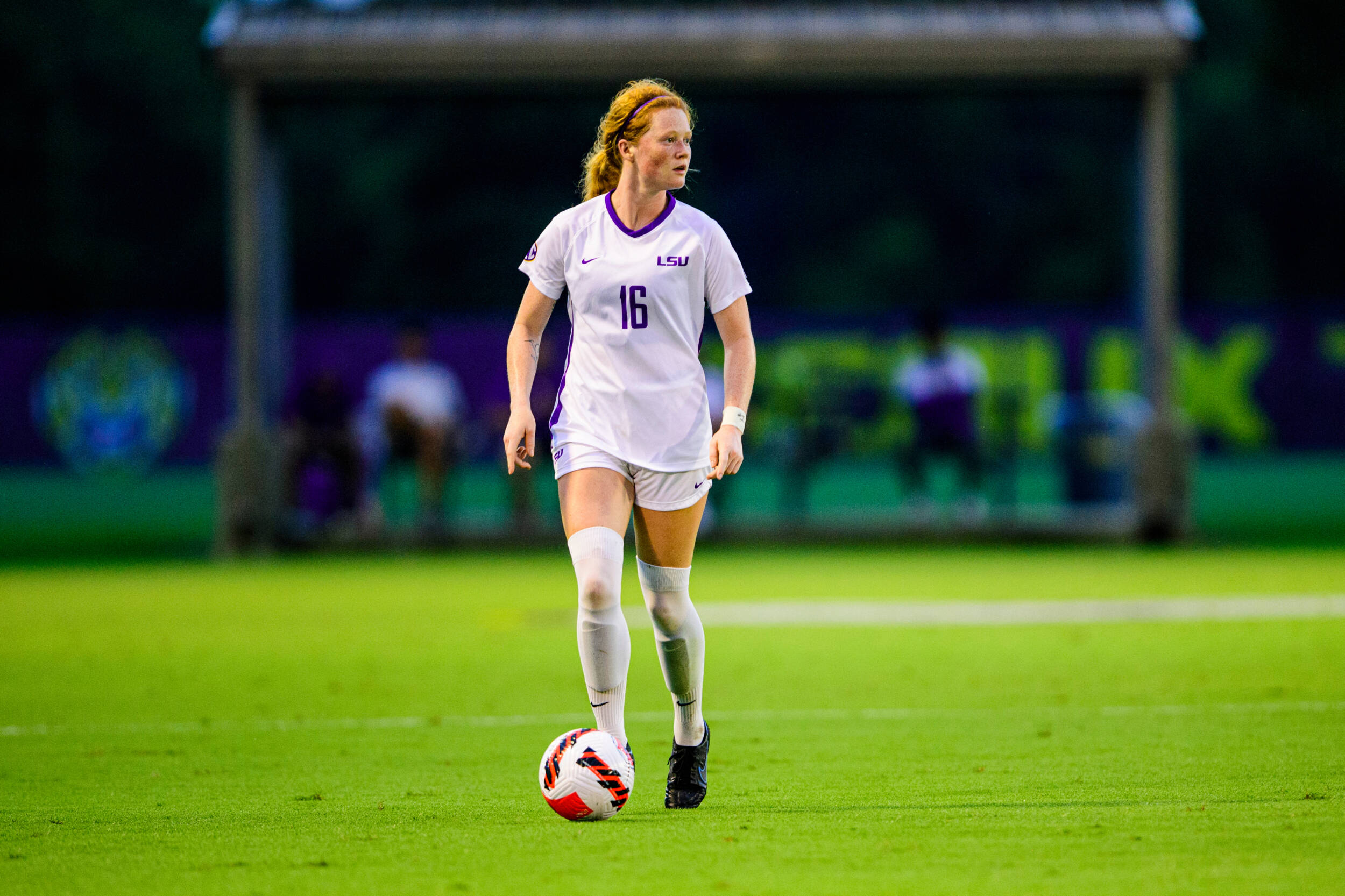 Tempe, Ariz. – The No. 17 LSU Soccer team (6-0-0) handed the No. 21 Arizona State Sun Devils (5-1-0) their first loss of the season with a resounding 5-2 win on Sunday afternoon at the Sun Devil Soccer Stadium. Midfielder Rammie Noel grabbed LSU’s first goal of the game in the 2nd minute before forward Alesia Garcia scored the second in the 9th minute. Midfielder Athena Kuehn grabbed the third goal in the 26th minute and was followed by defender Lindsi Jennings netting the fourth goal in the 32nd minute. The Tigers fifth and final goal came in the 66th minute as Garcia converted from the penalty spot.

The win is the third ranked win of the season for the Tigers, the most ever in a season by LSU. And the Tigers have matched the school record with a winning streak of nine games dating back to the spring of 2021. The 2002 Tigers won nine straight early in the season.

“Loved the way our team didn’t let that early goal phase them,” head coach Sian Hudson said. “To come back after allowing that early goal and score five unanswered, four of which came in the first half, is impressive.

“I love the direction this group is moving. We know there is still lots of soccer left to play, but I’m happy with how far we’ve progressed this early in the season. Still things we can do better, but I’m so proud of what this group accomplished on this roadtrip.”

The Sun Devils struck first after only 37 seconds as Olivia Nguyen found herself on the end of a ground cross and tapped it first-time into the back of the net.

LSU responded immediately as the Tigers attacked upon the restart. Forward Tinaya Alexander carried the ball past Sun Devil goalkeeper Birta Gudlaugs but was unable to get a favorable angle and had her shot on goal saved by Gudlaugs. The ball bounced outside of the box to the left flank, where midfielder Maddie Moreau sent a cross to the far post that Noel was able to pounce on and volleyed across goal and into the back of the net to tie the match at 1-1. The goal was Noel’s first of the season, and Moreau’s first assist of the year.

In the 9th minute, defender Reese Moffatt sent a dangerous ball into the box from a free kick. Gudlaugs attempted to clear the ball with a punch but only cleared it out as far as Garcia, who took a touch and chipped the ball into the right corner from the top of the box to give the Tigers a 2-1 lead and collect her fourth goal of the season.

The Tigers made it 3-1 in the 26th minute as Moreau found space on the wing and charged into the box, where she sent a ground cross through the legs of a Sun Devil defender and found Kuehn, who slotted the ball away with a composed finish from seven yards out. The goal took Kuehn’s goal tally to three for the season, and Moreau’s assist tally to two on the day, the first time that the midfielder had a multi-assist game in her collegiate career.

LSU’s strong first half continued to get better as the lead was extended to 4-1 in the 32nd minute. Midfielder Chiara Ritchie-Williams took a corner and sent a ball near post to Jennings, who flicked the ball across goal and into the goal after bouncing in from the right goalpost. The goal was the first for her in Purple & Gold, and only the second goal of her collegiate career. For Ritchie-Williams, the assist was her first of the season.

LSU goalkeeper Mollee Swift stayed focused after conceding in the first minute and came up with big saves in the first half to keep the Tigers in the driving seat. She picked up her first save in the 7th minute and picked up saves in the 22nd and 23rd minute before ending the half with three different saves in the 45th minute that kept Arizona State’s goal tally at one heading into halftime.

The Tigers maintained control in the second half and limited Arizona State’s chances in terms of quality. Swift collected her seventh save in the 50th minute as she collected a tame shot before getting her eighth and last save in superb style in the 60th minute as she denied a shot from five yards out with a reflex dive to her right side. Swift was substituted in the 72nd minute for Bella Zanotelli and finished with eight saves, a new season-high that takes her season total up to 24 saves.

In the 66th minute, Kuehn found space and charged into the box and beat two defenders before being clipped from behind and winning a penalty for LSU. Garcia stepped up to the penalty spot and drilled the ball past the Arizona State goalkeeper into the bottom left corner to make the lead 5-1. The goal was Garcia’s second of the afternoon and the second time in her LSU career she scored multiple goals in a match. For the season, Garcia’s goal total sits at five, tying her with striking partner Alexander to lead the team.

Zanotelli picked up a save in the 75th minute as she parried away a near-post shot after Arizona State broke away on the counter. The Sun Devils did pick up a consolation goal in the 78th minute as Eva van Deursen sent in a half-volley from 25 yards out that beat Zanotelli and cut LSU’s lead down to 5-2.

Arizona State won the shot battle by a margin of 22-17, as well as having more shots on goal with the difference being 11 to LSU’s 8. Despite the margin, the Tigers proved to be more clinical by creating and converting more quality chances throughout the matches compared to the Sun Devils.

LSU’s five goals on the afternoon was good enough to rank as the second most against a ranked opponent in program history, and the highest since a 6-0 victory over No. 8 Georgia in 2009. The Tigers now have a 4-3-0 record against Top 25 opposition under Coach Hudson and are on a nine match winning streak dating back to the 2020 season, which matches the program record.

LSU returns to Louisiana as they travel to Lafayette to take on the UL-Lafayette Ragin Cajuns at 7 p.m. CT on Thursday, September 9th.