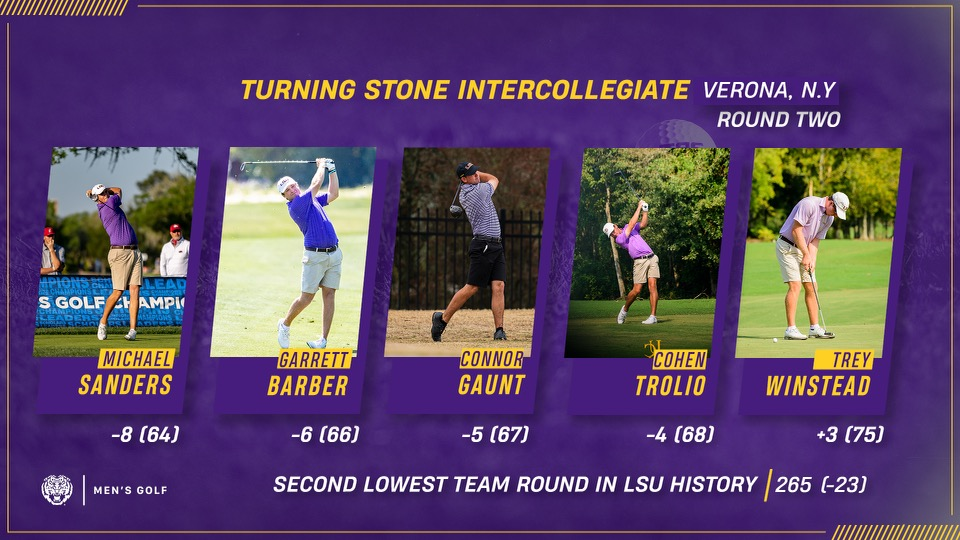 Verona, New York – The LSU men’s golf team shot the second lowest round in relation to par in school history on day one of the Turning Stone Intercollegiate at Kaluhyat Golf Club on Sunday with a 23-under 265 in the second round.

Michael Sanders shot the sixth lowest round in LSU history—an eight under par 64—to take the lead in round two; Sanders sits at 9-under 135 two strokes ahead of teammate Garrett Barber (7-under 137) as the top two individuals on the leaderboard. This was a career low round for Sanders, where he also made a career high nine birdies in the round.

The Tigers two-round total of 22-under of 554 (289-265) is 11 shots better than Missouri, who sits in second place at 11-under 565. The school record for lowest team round was achieved just three years ago at the David Toms Invitational when the team carded a 25-under 263 at Southern Trace Country Club.

LSU finished the second round with Michael Sanders alone atop the leaderboard and Garrett Barber tied for second. They each eagled today, as well. Sanders’ seventh career eagle came in round one on the first hole and Barber’s came in the second round on the sixth hole. Barber carded his second career bogey free round in round two.

“I felt like we started a bit tight today,” Coach Winstead said. “I’ve seen it before with teams in their first event. I’m happy to see the guys loosen up a bit and play more like we have been playing at home in that second round. This tournament is far from over. We will learn more about where we are as a team tomorrow.”

Round One Recap
The Tigers started the day with a 1-over 289 in the first round that had them tied for second after 18 holes. Nicholas Arcement, who was playing as an individual, had the low round with a 3-under 69. LSU used counting scores of 1-under 71s from Connor Gaunt, Garrett Barber, and Michael Sanders; Cohen Trolio added a counting score of 4-over 76 for the Tigers in his debut round for LSU. Trey Winstead carded a 5-over 77.

Round Two Recap
Michael Sanders broke out in the second round to bring himself to a career low round of 8-under 64. He carded a career high nine birdies in the round to move into sole possession of first place on the individual leaderboard.

Garrett Barber charged up the leaderboard into tie for second with a 6-under 66 that featured an eagle, four birdies, and 13 pars; it was his second career round for LSU that he has gone bogey free.

Connor Gaunt got up to fifth on the leaderboard with a scorecard of 5-under 67 with six birdies in the round. Cohen Trolio registered the first of many under par rounds of his career with a 4-under 68 as the final LSU counting score.

Nicholas Arcement moved into tie for eighth, shooting even par in the second round. Trey Winstead sits at T47 after shooting a 3-over 75.

Up Next
The Tigers will tee it up for the final round of play on Monday with an 7:00 a.m. CT shotgun start at Kaluhyat GC. LSU will go off the first, second, and third tees alongside Missouri and Penn State. Tee times and pairings can be viewed at golfstat.com.