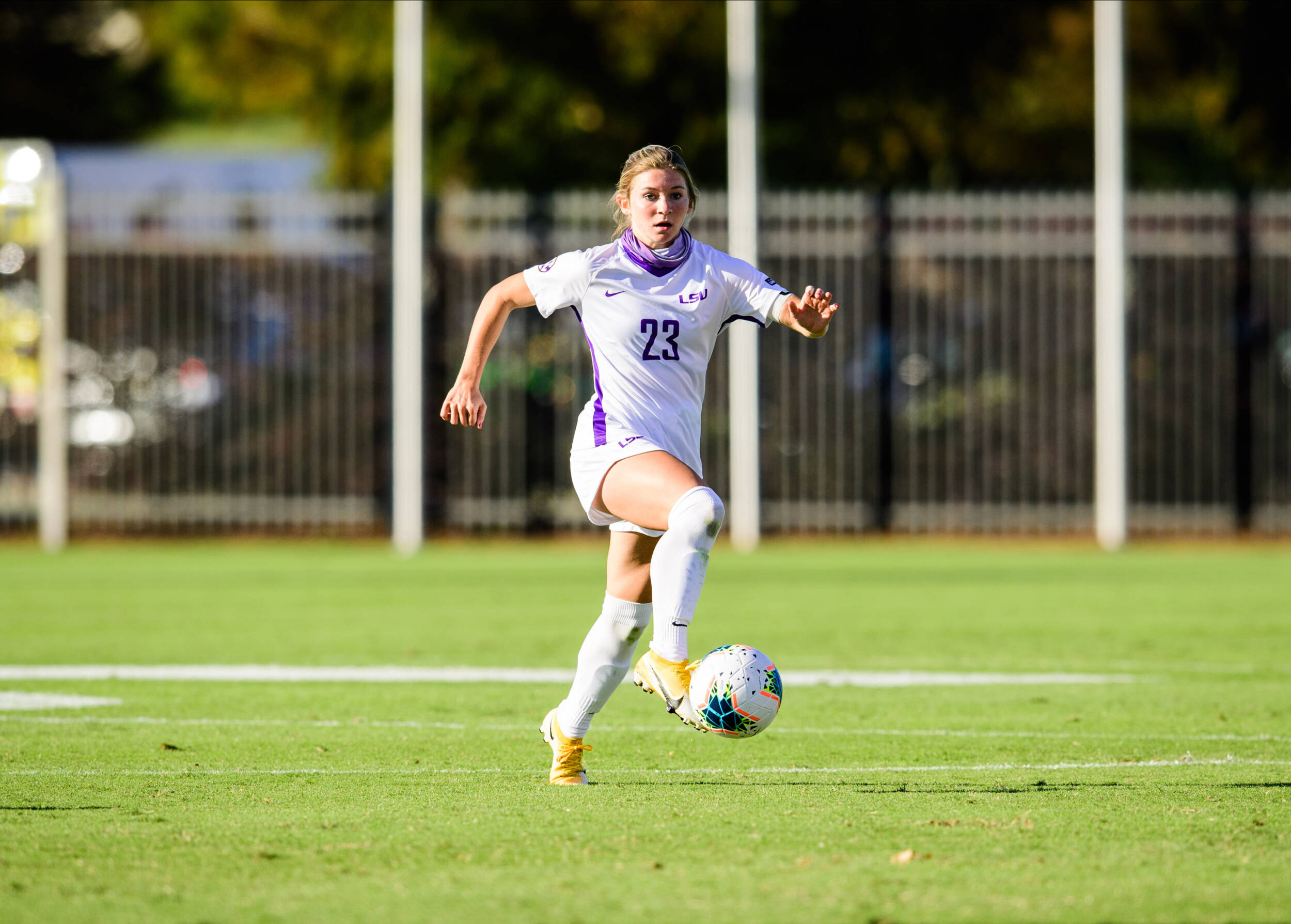 Tempe, Az. – The LSU Soccer team (5-0-0) grabbed its fifth win of the season with a 2-0 victory over the Arizona Wildcats (1-2-0) on Thursday afternoon at the Sun Devil Soccer Stadium. The Tigers took the lead in the 11th minute after midfielder Maddie Moreau curled a left-footed effort into the top left corner before doubling their lead in the 29th minute after forward Alesia Garcia connected with midfielder Athena Kuehn in the box, who slotted the ball past the Wildcat goalkeeper.

“Feels great to continue our winning ways,” head coach Sian Hudson said. “We kept our tempo and our rhythm in possession and scored a couple of goals. Another clean sheet by the defensive crew. Across the board just really pleased with the performance overall.”

LSU started out quick and began pressuring Arizona’s defense early in the match. Moreau registered the first shot on target in the sixth minute, a shot across goal that was saved by Wildcat goalkeeper Hope Hisey. The Tigers got another look at goal a minute later after midfielder Rammie Noel’s effort sailed wide right.

The breakthrough came in the 11th minute as Moreau carried the ball into the box before cutting inside on her left foot and lifting the ball past the goalkeeper and into the top left corner to give LSU the 1-0 lead. The goal is Moreau’s second of the season, and second in her last three games.

The Tigers did not let up after the goal and continued to push the Wildcats on their back foots. Forward Tinaya Alexander’s free kick from 19 yards out in the 18th minute narrowly sailed above the bar, and Moreau once again sent a shot on goal, this time with Hisey able to stop her shot.

The second goal of the match came in the 29th minute as the Tigers’ high pressure was rewarded on the scoreboard. Kuehn pressed the Wildcat centerback and blocked her attempted clearance. The ball fell to Garcia in the box, who played a pass to Kuehn that ended with Kuehn placing her shot between the goalkeeper’s feet and into the back of the net. The goal was the second of the season for Kuehn, as well as Garcia’s second assist of the year.

LSU had three more chances towards the end of the first half. Alexander started a run down the right side before playing a cross to Garcia, whose redirection touch caromed off the left post before midfielder Meghan Johnson’s followup sailed wide right. Defender Tilly Wilkes shot on goal in the 39th minute was denied by Hisey before Kuehn rifled the crossbar a minute later to narrowly miss out on a second goal.

Goalkeeper Mollee Swift registered one save in the first half, collecting a tame effort from Tianna Sidtikun in the 19th minute.

The Tigers followed their strong first half with a dominant second half, controlling the tempo of play and having multiple chances narrowly miss the frame of goal. Wilkes once again tested Hisey in the 54th minute, with the Wildcat goalkeeper going full stretch to parry the ball away from goal.

Swift and the LSU defense limited the quality of play and chances from Arizona. Swift made saves in the 47th and 66th minute before recording her fourth and final save of the match in the 85th minute as she dove to her right and stopped a strong shot from Nicole Dallin. The clean sheet is the third of the year for LSU, and Swift’s four saves takes her season total up to 15.

The Tigers outshot the Wildcats by a margin of 22-6, with LSU registering seven shots on goal compared to Arizona’s four. The Tigers were dominant in possession, holding control of the ball for 71% of the match compared to the Wildcats’ 29%.

With the win, LSU moves to 5-1-0 in neutral site contests under Coach Hudson.

Up Next
The Tigers will return to the Sun Devil Soccer Stadium in a Top 25 matchup taking on the No. 21 Arizona State Sun Devils at 4 p.m. CT on Sunday, September 5th.