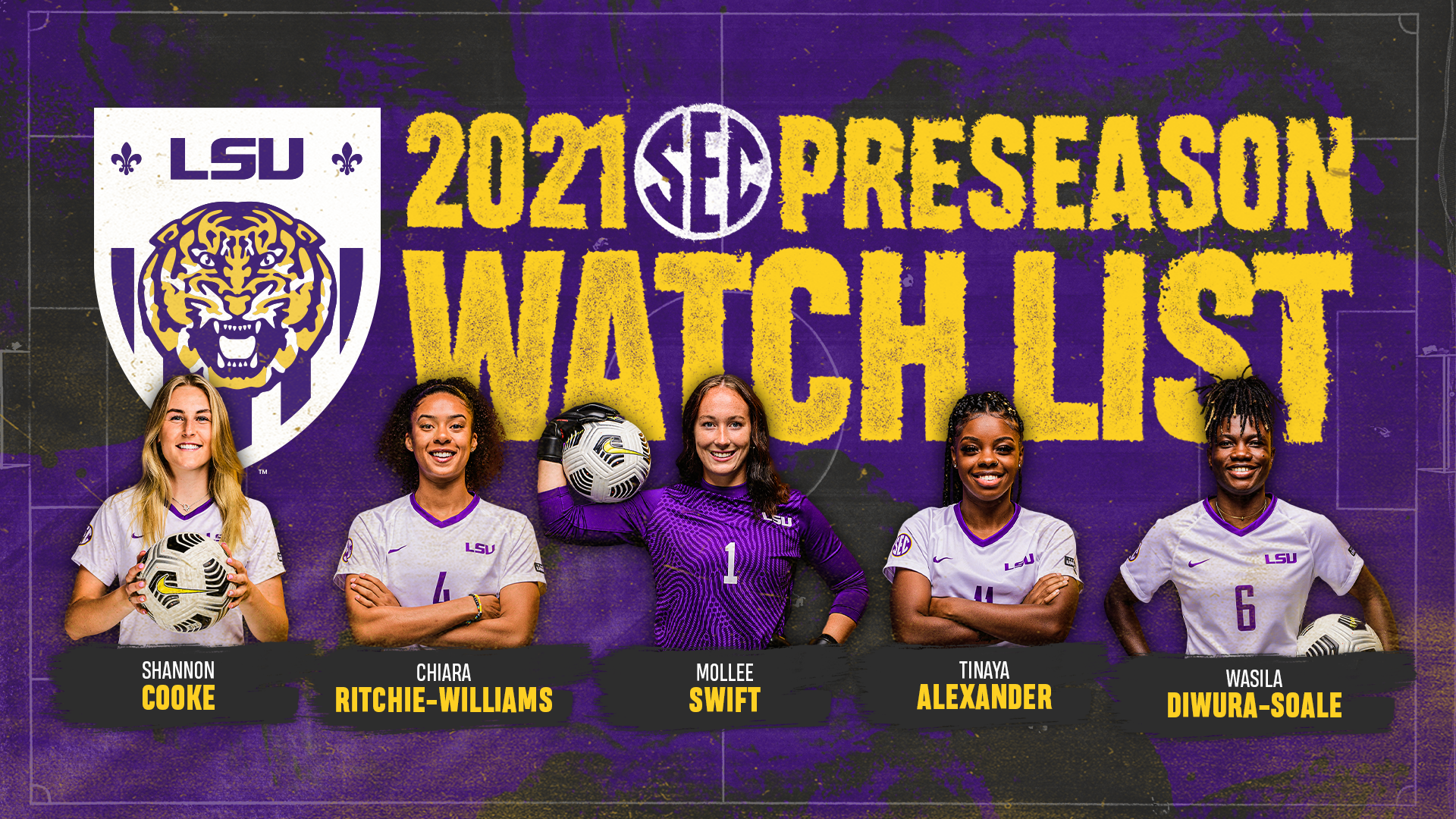 Baton Rouge, La. – Five members of the LSU soccer program have been named to the SEC Preseason Watch List, the league office announced on Wednesday morning. Chiara Ritchie-Williams, Shannon Cooke, Wasila Diwura-Soale, Tinaya Alexander, and Mollee Swift represent LSU on the list, which includes the top players in the conference.

Cooke and Ritchie-Williams are two of LSU’s three team captains and return for their fourth and fifth seasons of play at LSU. Ritchie-Williams will man the midfield for the Tigers and will be expected to play big minutes for LSU. She comes into the season having played in 77 matches for LSU, including 74 starts. She’s logged a total of 6,951 minutes on the pitch during her LSU career and is the unquestioned team leader. Cooke is ready to suit up for year No. 4 in LSU gear and will be a key component of LSU’s defensive efforts to thwart opposing attacks. She has a rocket of a foot that helps LSU build out of the back as well; she’s been playing as the centerback during the 2021 preseason. She has four career goals and two careers assists to her name.

Swift is the backstop that holds it down for LSU. She transferred in for the 2020-21 season and immediately made an impact on LSU’s defensive side. She made 80 saves, had a save percentage of .833 and ended the season with a GAA of 0.95; all three of those stats ranked inside the top four of the SEC last year. Her .095 GAA was the sixth lowest in LSU single season history, and she played a part in five of LSU’s six shutouts a year ago.

Alexander and Wasila Diwura-Soale are the other key cogs on the preseason list. Both of the two play a flashy style of style of soccer and have a knack for being in the right spot at the right time. Alexander is coming off a career year in 2020-21 in which she scored nine goals and registered three assists to lead the LSU offense. Diwura-Soale is as quality as it gets in the midfield and she will find you if you are open. She had a team high four assists a season ago and will look to distribute more and more this fall.

The SEC preseason poll, voted on by head coaches around the league, has LSU slated to pick ninth out of the 14 league teams. Arkansas and Texas A&M are the co-favorites to win the league.

LSU hosts its first home regular season match of the year on Thursday night at 7 p.m. CT against Southern Miss. Admission is free. You can view the full 2021 schedule at lsusports.net.