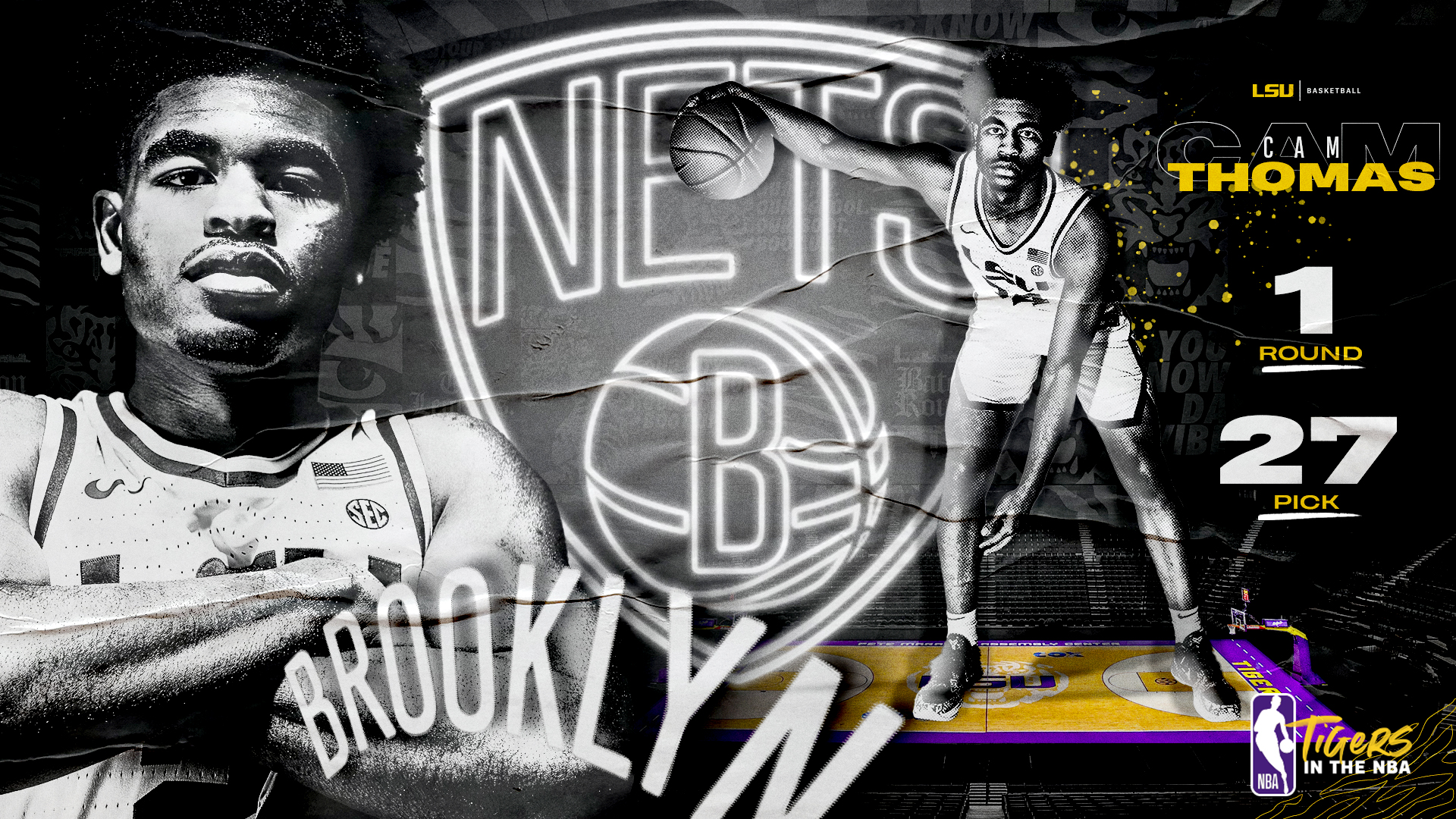 BATON ROUGE – LSU’s star freshman scorer Cameron Thomas was selected by the Brooklyn Nets with the 27th pick of the first round Thursday night in the 2021 NBA Draft held in Brooklyn, New York.

The pick is the 16th time an LSU Tiger has been selected in the first round of an NBA draft. The last time was in 2016 when Ben Simmons was selected with the opening pick of the draft by the Philadelphia 76ers.

Thomas joins named like Joe Dean, Bob Pettit, Pete Maravich, Mahmoud Abdul-Rauf, Shaquille O’Neal Stromile Swift, Tyrus Thomas and Simmons who were among the 15 players previously selected in the opening round of the NBA Draft since 1952.

“I feel great about it,” Thomas said in an interview on ABC-TV. “Going to Brooklyn, I watch all of those offensive guys get buckets, just being around them, I feel like it’s a match made in heaven. It’s a great pick and I can’t wait to get to work.”

Later in the draft media room, Thomas talked about meeting with Brooklyn.

“I had a workout with [Brooklyn] very early into my process,” Thomas said. “They loved me and I loved their vibe. I felt like everything was in place. I loved them from the get-go just from that one workout I had with them. We had an interview with them about a week ago. I felt like it was a match made in heaven, all our personalities connected.

“With me, watching them so much this year, with James Harden being my favorite player, with me watching Kyrie and how skilled he is, Kevin Durant, with me to come in, learn from those guys and scoring the ball, it’s a match made in heaven. I can’t wait to play with some of my favorite players, so that’s crazy.”

Thomas was joined in the Barclays Center by his mother Leslie and his sister Shaniece, along with LSU men’s basketball head coach Will Wade.

“The dude is a shooter,” said analyst Jay Bilas on the ESPN telecast. “He’s got a great step back move that’s really his go to. He can spin, go into the mid-post. He shoots off the bounce and creates for himself with what I would say is supreme confidence. He is unafraid to take on any challenge on the offensive end. He shot about 40 percent on catch and shoots, 32 percent from three-point range overall, but largely because he took a ton of tough shots. Good in the mid-range and had the best +/- in the Southeastern Conference and a 90 percent free throw shooter. He can fill it.”

“I just thought he was well disciplined. He’s got an edge to him and I’m going to make a prediction right now,” said ESPN NBA Front Office Insider, Bobby Marks. “When we get to February at the All-Star break, he’s going to be on that rising team as far as these rookies that are going to be there. He is that good.”

The Chesapeake, Virginia native had an outstanding freshman campaign at LSU, billed upon his arrival as a “prolific scorer” and he certainly delivered, averaging 23.0 points a game, 3.4 rebounds and 1.4 assists per game. He made 68 three-pointers and 194-of-220 free throws (88.2%) as he earned first-team All-SEC honors and was named a Collegeinsider.com Kyle Macy Freshman All-America.