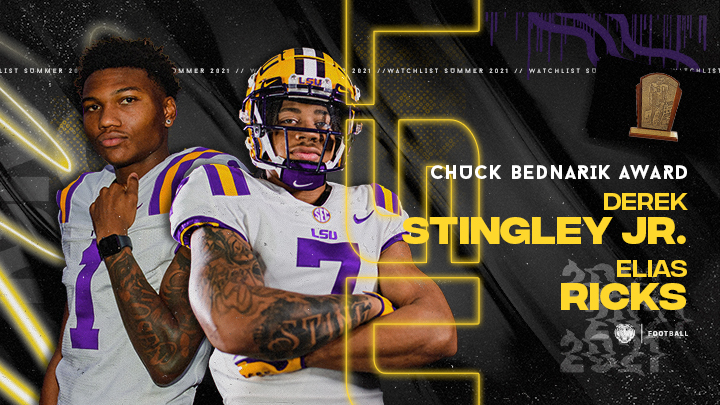 BATON ROUGE – LSU All-America cornerbacks Derek Stingley Jr. and Eli Ricks have been named to the watch list for the 85th annual Bednarik Award, which is presented annually to college football’s defensive player of the year, the Maxwell Football Club announced on Monday.

Stingley and Ricks are looking to join past LSU winners of the Bednarik Award in Patrick Peterson (2010) and Tyrann Mathieu (2011).

Stingley, a Baton Rouge native who prepped at the Dunham School, goes into the 2021 season looking to join Tommy Casanova as the only three-time first-team All-Americas in LSU history. Casanova, who is a member of the College Football Hall of Fame, earned first team All-America honors as a defensive back from 1969-71.

Stingley, who started all 15 games as a true freshman during LSU’s 2019 national championship season, earned consensus All-America honors that year followed by first team All-America recognition from the American Football Coaches Association (AFCA) in 2020. Stingley was also voted as the SEC Newcomer of the Year in 2019 after leading the league in interceptions with six, including two in the SEC Championships Game win over Georgia.

In two years with the Tigers, Stingley has recorded 65 tackles, six interceptions and 26 pass breakups. He’s also recovered two fumbles and forced another.

Ricks, a Rancho Cucamonga, Calif., native, made an immediate impact during his rookie season a year ago as he led the Tigers and ranked second in the SEC in interceptions with four. Ricks returned two of his interceptions for touchdowns – the first in a win over South Carolina and the other coming in the upset of sixth-ranked Florida.

Ricks earned Freshman All-America honors and was named third team All-America by the Associated Press. He was also named to the SEC All-Freshman Team.

Earlier this summer both Stingley and Ricks were named preseason All-Americans by Walter Camp.

The Bednarik Award watch list is comprised of 90 candidates on the defensive side of the ball.