Harrison Named A Finalist For The Bowerman 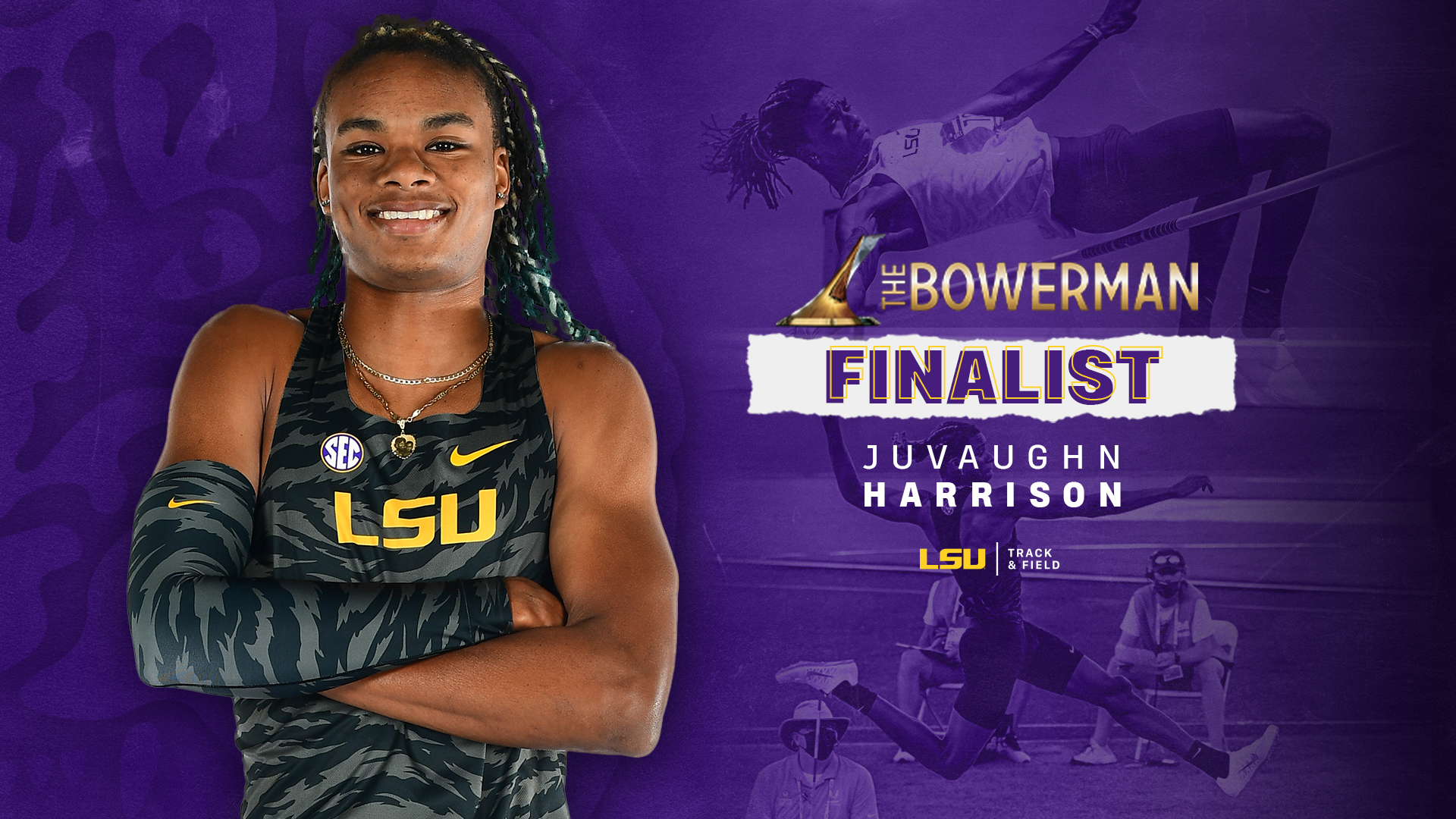 Harrison, aka Mr. Jumps, had a historic final season in the Purple and Gold for LSU as he brought home four individual national titles and helped LSU win the men’s outdoor team national title as well. He competed 16 times on the season and won 14 event titles. He went a perfect 8-0 in high jump competitions and recorded a record of 6-2 in the long jump.

He wasn’t just winning a lot; he set a number of all-time marks in the collegiate and LSU record books along the way. He owns all four LSU school records in the high jump and long jump for both indoors and outdoors, and he set three collegiate all-time top-10 marks

It was in mid-March when he won his first two NCAA titles of the year with the most prolific one-day high jump/long jump performance in world history. He started his day off with a win in the high jump with a clearance of 7’ 6.50” (2.30 meters). Harrison had a quick break before action in the long jump got going; he recovered as much as he could and went back out to compete. He launched himself a personal best distance of 27’ 8.75” (8.45 meters) in the fifth round of the event to give himself a commanding lead of the event. The mark of 27’ 8.75” went down as the third best in collegiate history and won him the national title.

He returned to the NCAA Outdoor Championships with the goal of winning two more NCAA event titles, and that he did. He started the meet off with a win in the long jump on June 9 with a winning leap of 27’ 1.75” (8.27 meters) on a cool and brisk evening in Oregon. He returned to action two days later and once again triumphed with a winning clearance of 7’ 7.75” (2.33 meters) in the high jump. That made him a perfect 4-0 in NCAA championship event competitions this season.

The most scintillating performance of the season to some might be his immaculate showing in the high jump on May 13 at the SEC Outdoor Championships. He took seven attempts in the high jump and cleared the bar all seven times. The final bar was at a height of 7’ 8.75” (2.36 meters) and that made him the second best high jumper in collegiate outdoor history. The mark was an SEC meet record, and it was the seventh best clearance ever by an American outdoors.

On April 24 at the LSU Alumni Gold meet, the native of Huntsville, Alabama, registered what was then a personal best mark of 27’ 8.25” (8.44 meters) in the long jump to become the sixth best mark in collegiate history.

The Bowerman only accounts for performances that occur within the collegiate season, but that won’t stop us from mentioning what JuVaughn did at the U.S. Olympic Trials as well. He swept the long jump and high jump U.S. titles and will become the first American to compete at the Olympics in both event since Jim Thorpe did so in 1912.

Harrison becomes the fourth LSU athlete to be named a finalist for The Bowerman joining Kimberlyn Duncan (x2), Sha’Carri Richardson, and Mondo Duplantis. LSU has never had a male athlete win The Bowerman, which dates back to 2009, but both Duncan (2012) and Richardson (2019) have won it on the women’s side.

Harrison is a finalist alongside Oregon’s Cole Hocker and Arizona State’s Turner Washington. The Bowerman will be awarded on December 17 at the USTFCCCA Convention in Orlando, Florida. Fans have a chance to factor into voting for the winner and can visit http://thebowerman.org/vote.