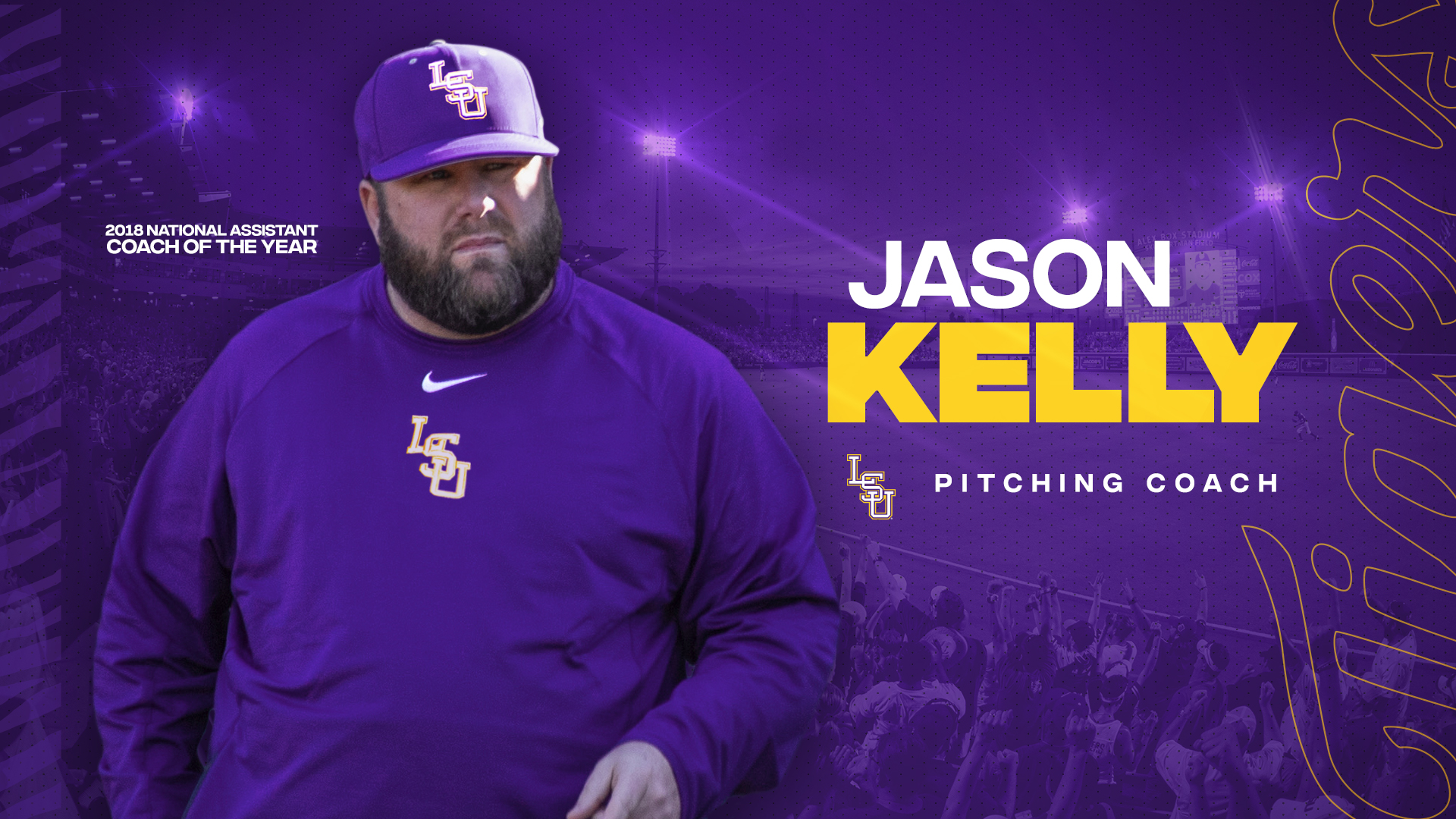 BATON ROUGE, La. – Jason Kelly, the 2018 National Assistant Coach of the Year in college baseball, has been hired as LSU’s pitching coach, head coach Jay Johnson announced Thursday. The hiring is effective upon the completion of the university’s background check process.

Kelly earned the national honor after he helped lead Washington to the 2018 College World Series, marking the first CWS appearance in school history. He most recently worked at Arizona State for the past two seasons as the Sun Devils’ pitching coach.

“I am incredibly excited to announce Jason Kelly as our pitching coach here at LSU,” Johnson said. “Coach Kelly is one of the best pitching coaches in the country at any level and possesses a very complete skill set that will help our current and future pitchers at LSU reach their full potential and pitch at an elite level.

“Coach Kelly is excellent in the game in regards to his preparation and pitch calling. He is outstanding in the training environment, helping pitchers develop elite velocity, pitchability and pitch design.”

Kelly in 2021 directed an Arizona State staff that sparked the Sun Devils to an NCAA Tournament berth despite injuries to ASU’s three weekend starters and its closer. Kelly’s impact at Arizona State was immediate in the pandemic-shortened 2020 season, as the team ERA was lowered from 4.93 in 2019 to 3.56, and the Sun Devils were on pace to finish in the nation’s Top 100 in ERA, WHIP, strikeouts per nine innings, strikeouts/walks ratio and hits per nine innings.

Kelly served as Washington’s pitching coach for seven seasons (2013-19), producing 15 MLB draft selections. After making only one NCAA Tournament appearance in the 13 seasons prior to Kelly’s arrival, the Huskies earned three NCAA berths during his seven seasons, including the 2018 College World Series.

“Coach Kelly has an advanced ability using new age data and metrics to help our pitchers understand their pitch arsenal and how to best use it,” Johnson said. “Most importantly, he is great at building relationships and is a great communicator, which will help us continually recruit and develop elite pitching staffs at LSU. This is a great day for current and future LSU pitchers.”

D1Baseball.com named Kelly the 2018 National Assistant Coach of the Year for his integral role in Washington’s drive to its first-ever CWS appearance. The Huskies finished first in the Pac-12 and 10th in the nation in walks per innings. In 2017, Kelly helped the Huskies attract a Top 10 recruiting class, and in 2016, he developed and mentored Washington pitcher Troy Rallings, a first-team All-American and the Pac 12 Pitcher of the Year.

The 2014 Huskies achieved their highest national ranking in team history, reaching No. 5 in Baseball America, Perfect Game and Collegiate Baseball, and the pitching staff played a huge role in UW’s success. The team ERA of 3.11 ranked third in the pitching-rich Pac-12 Conference and was the lowest by the Huskies since 1985.

Kelly worked as the pitching coach at Cal Poly from 2007-12, and in his first season he produced two pitchers that were selected in the Top 5 rounds of the MLB Draft. His 2011 Cal Poly staff recorded the best ERA in the school’s 17-year existence as a Division I program.

He began his collegiate coaching career at Chico State, where as the pitching coach he helped lead CSU to back-to-back Division II College World Series berths. His 2005 Chico State staff registered the sixth-best ERA in the nation.

Kelly and his wife, Tracy, are the parents of two children, daughter Peyton and son Cade.