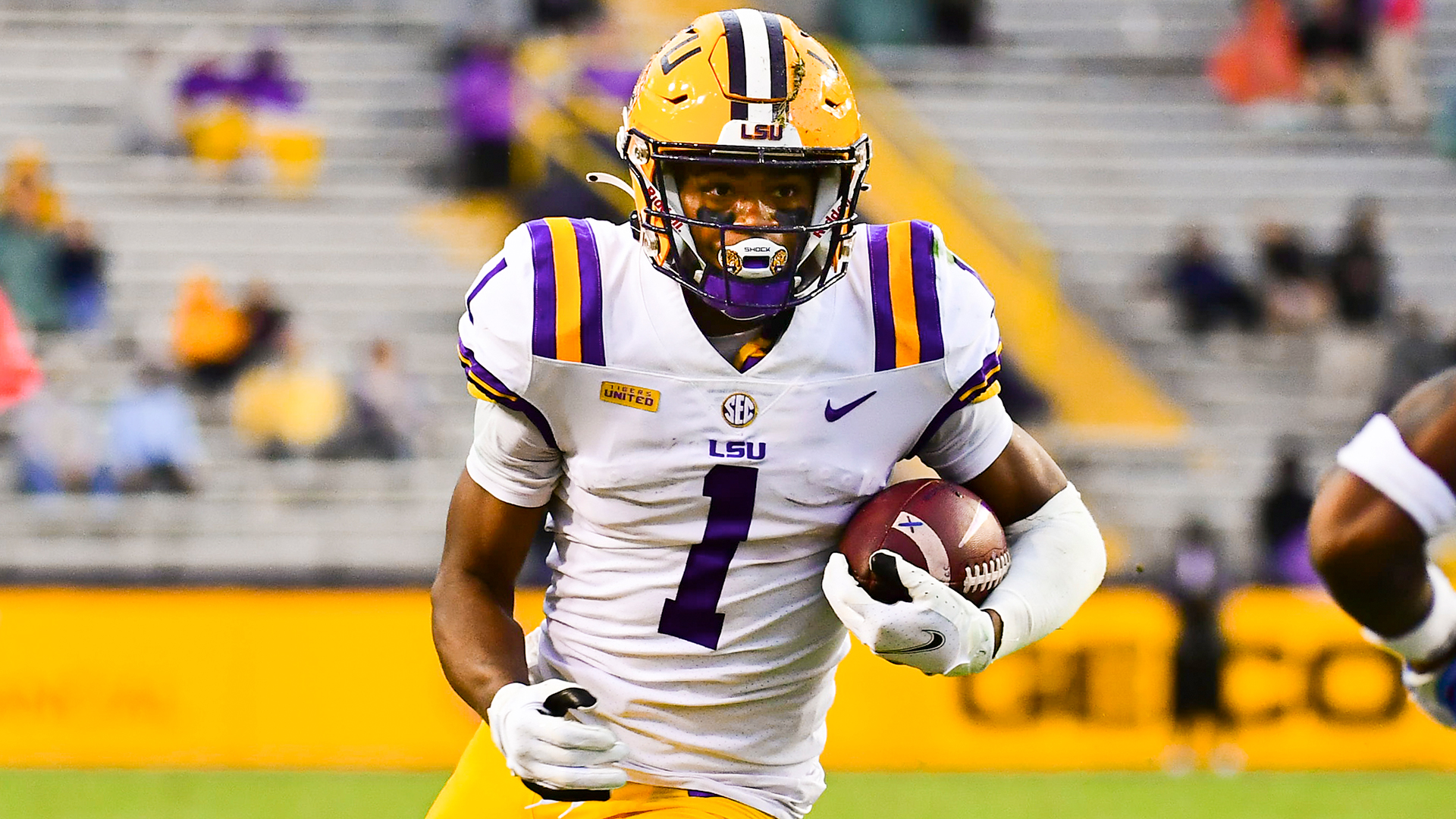 Trailing 48-46 in the final two minutes of the contest, Boutte caught a pass from Johnson at the Ole Miss 33-yard line and sprinted along the left sideline to complete a 45-yard touchdown reception that gave LSU its final margin with 94 seconds to play. With less than a minute left and Ole Miss nearing the LSU red zone, LSU’s Ali Gaye jarred the ball from Ole Miss quarterback Matt Corral. LSU’s JaCoby Stevens jumped on the loose ball at the 27 to give LSU the victory.

The Tigers defense forced six turnovers including four first-half interceptions, the first of which was returned 31 yards for a touchdown by LSU cornerback Jay Ward.

Johnson, starting for the second time in 2020, was 27-of-51 passing for an LSU-freshman record 435 yards including three touchdowns with an interception. He also ran for two 1-yard touchdowns and finished with 45 net yards on 14 carries.

The Tigers are scheduled to open the 2021 season on Sept. 4 at the Rose Bowl against UCLA.

The game was played on the latest calendar date for an LSU football regular-season game since December 20, 1897, versus Montgomery Athletic Club, a contest that was played on the Old Parade Ground south of Pentagon Barracks in Baton Rouge.

After LSU went three-and-out on its first possession, Ole Miss moved 85 yards in six plays to take a 7-0 lead, as the drive culminated in a 20-yard TD pass from quarterback Matt Corral to wide receiver Braylon Sanders with 11:18 remaining in the first period.

LSU’s Cade York connected on a 34-yard field goal at the 5:35 mark of the first quarter, capping a seven-play, 15-yard march and narrowing the Ole Miss lead to 7-3.

On the first play from scrimmage following the LSU field goal, cornerback Jay Ward intercepted a Corral pass and returned it 31 yards for a touchdown, giving the Tigers a 10-7 lead at the 5:26 mark of the first quarter. It was the Tigers’ fourth pick-six this season, LSU’s most since 2003, when it also returned four interceptions for scores.

LSU safety Todd Harris Jr. intercepted a Corral pass at the LSU 14 to stop an Ole Miss drive with 52 seconds left in the first quarter.

The Tigers capitalized on the turnover, driving 86 yards on nine plays and scoring on a one-yard sneak by quarterback Max Johnson. The march featured a 30-yard dash by running back Josh Williams to the Ole Miss four-yard line.

Ole Miss responded with a 100-yard kickoff return by Jerrion Ealy, reducing the deficit to 17-14 with 12:03 left in the second quarter.

Corral was intercepted for the third time with 6:12 left before halftime by defensive end Ali Gaye, giving LSU a first down at the Rebels’ 40. The Tigers again took advantage of the miscue, as Johnson hit wide receiver Kayshon Boutte with a 32-yard TD pass to increase the advantage to 24-14.

The Rebels took the ensuing kickoff and drove 61 yards in six plays, as running back Henry Parrish Jr. reached the end zone on a one-yard burst with 3:07 remaining before intermission.

LSU then drove 75 yards on nine plays and widened the gap to 31-21 when Johnson fired a 18-yard scoring pass to Boutte with 58 seconds left before halftime.

Corral threw his fourth interception with 23 seconds remaining in the half when linebacker Jabril Cox picked off a pass at the Ole Miss 19. LSU’s four interceptions marked its most in a half since 1999, when the Tigers recorded four picks in the first half versus San Jose State.

The Tigers again secured points after the turnover, as York hit a 34-yard field goal with two seconds left before halftime.

LSU intercepted its fifth Corral pass on the first Ole Miss possession of the second half, as Ward grabbed his second pick of the day and returned the football to the Rebels’ 44-yard line. The Tigers recorded five interceptions in a game for the first time since September 18, 2010, versus Mississippi State.

The Tigers cashed in on the opportunity when York nailed a 22-yard field goal, giving LSU a 37-21 advantage at the 9:50 mark of the third quarter.

The Rebels narrowed the deficit to 37-27 on the ensuing drive, moving 65 yards on five plays and scoring on a 10-yard run by Parrish Jr. A two-point conversion attempt failed, and the Tigers led by 10 with 8:11 remaining in the third period.

After an LSU punt, Ole Miss engineered another touchdown march, this one covering 77 yards on eight plays and culminating on a five-yard TD pass from Corral to wide receiver Dontario Drummond at the 4:03 mark of the third quarter.

York booted a 50-yard field goal on the Tigers’ next possession – which featured a 47-yard completion from Johnson to Boutte – and LSU led 40-34 at the 2:16 mark of the third period.

The Rebels grabbed a 41-40 lead on the first play of the fourth quarter when Corral hit Sanders with a 25-yard scoring strike, capping a six-play, 67-yard march.

LSU then moved to the Ole Miss 10-yard line, but Johnson was intercepted by Ole Miss defensive back Keidron Smith in the end zone on a second-and-six play with 12:35 left in the contest.

The Rebels briskly drove 80 in 11 plays, with Corral scoring on a fourth-down, two-yard touchdown run to extend the lead to 48-40 at the 8:43 mark.

The Tigers came right back with long march for a touchdown, as Johnson snuck for a first down to the Ole Miss 15 on LSU’s only third down of the drive. Then, after Boutte’s 14-yard catch-and-run to the Rebels 1, Johnson made the final yard to cut Ole Miss’ advantage to 48-46 with 5:31 to play. Johnson’s two-point pass attempt fell incomplete.

A 10-yard sack of Corral by LSU defensive tackle Neil Farrell Jr. forced Ole Miss three-and-out. On fourth-and-22, a 52-yard punt by Ole Miss’s Mac Brown was caught over the shoulder in the driving rain by Moore and returned nine yards to the LSU 44 – a key play in shortening the field for Tigers’ game-winning drive.

Three plays later, Johnson dropped back to the LSU 48 and found Boutte streaking from right to left at the Ole Miss 33. Boutte spun out of a tackle and accelerated along the left sideline before cutting to his right at the Ole Miss 7 and dodging two would-be tacklers near the end zone.

The 45-yard touchdown reception gave LSU a 52-48 lead and gave Boutte the LSU single-game receiving yards record (308 yards). York tacked on the PAT and LSU had its final margin with 1:34 to play.

Ole Miss’ final drive wasn’t without drama, as Corral ran 22 yards on third-and-10 to the LSU 44. After passes of 4 and 12 yards to the LSU 28, with less than a minute to play, Corral was stripped of the ball by LSU defensive end Ali Gaye and safety JaCoby Stevens recovered at the LSU 27 to clinch the victory.