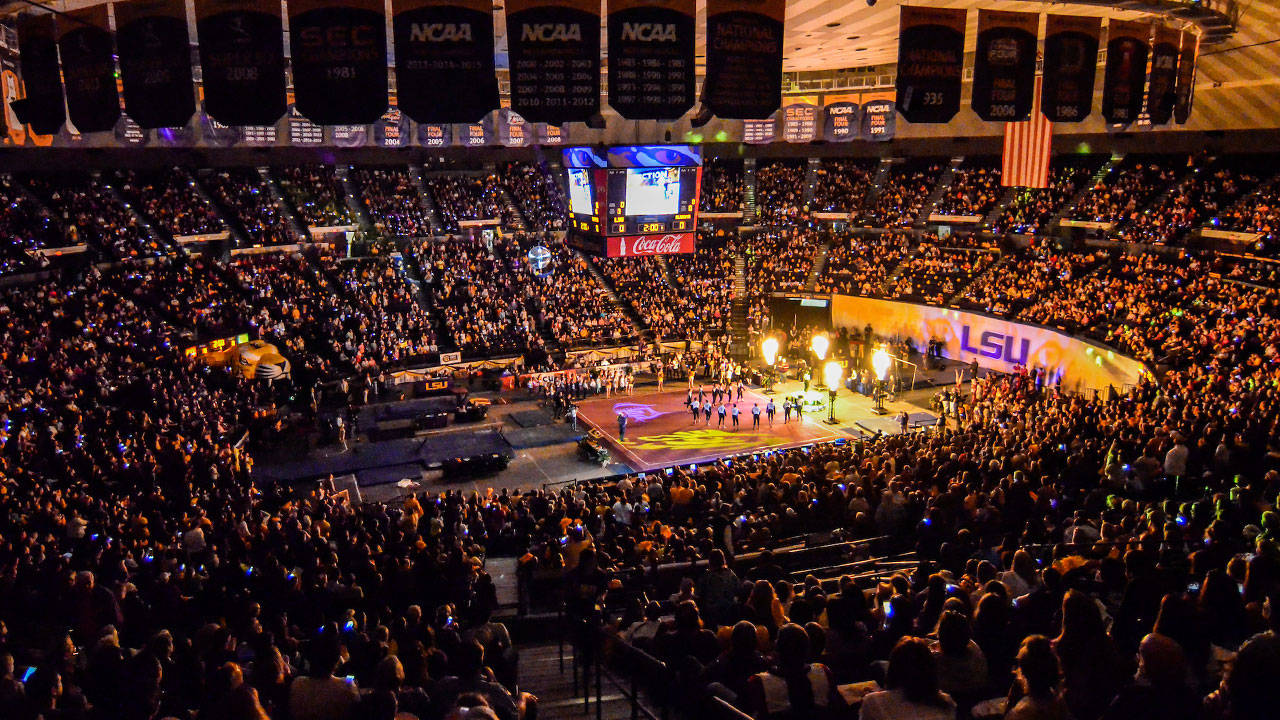 Paramount to the success of an intercollegiate program is a first-class facility, and the Tigers have just that in the Pete Maravich Assembly Center.

For 42 years the “PMAC” has been home to some of the finest gymnastics competitions in the nation, and LSU has been nearly unbeatable in the facility as the Tigers have earned a 267-55-3 record since the program first started in 1975 for a winning percentage of 83 percent. The Tigers finished 5-0 inside the Maravich Center in 2016, including a victory over eventual national champion Oklahoma. The Tigers are 21-0 at home over the last three seasons.

The Maravich Center has served as the host site for three SEC Championships and nine NCAA Regional Championships, the last of which came in 2014.

Tiger fans have come out in droves to the Maravich Center to watch LSU gymnastics. The 2016 season was no different as LSU shattered the home attendance record for the fourth-straight season as an average of 9,906 fans attended each meet. Three of the Top-5 most-attended meets took place in 2016, including the No. 1 most-attended meet.

All 10 of the most attended meets in the Maravich Center have come in the last four seasons as the Tigers have reached new heights with NCAA Super Six Appearances in 2013, 2014 and 2016.

Seating 13,215 spectators, the massive $11.5 million building has competed with neighboring Tiger Stadium as the most visible structure on the LSU campus since its completion in 1971.

Originally named, “The Assembly Center,” in 1988 Louisiana Governor Buddy Roemer signed legislation changing the official name of the building to the Pete Maravich Assembly Center in honor of the former LSU basketball legend who had died earlier that same year.

The Maravich Center also serves as home to both the LSU men’s and women’s basketball teams, as well as the volleyball program.

In addition to the normal seating configuration, a proscenium stage can be lowered into place at the north end allowing some 4,500 seats for theatrical productions. An additional 1,000 seats can be placed on the floor for graduations, convocations, lectures, concerts or other special events.

Several renovations have recently been completed to keep the Maravich Center as one of the top facilities in the Southeastern Conference. In 2004, the upper concourse was remodeled to include exhibits, displays and interactive kiosks documenting LSU sports history in the PMAC. In 2008, a new multi-million dollar high definition video replay system was installed in the scoreboard, and in 2006 and again in 2010 new seating was installed to make fans more comfortable and bring them closer to the action.