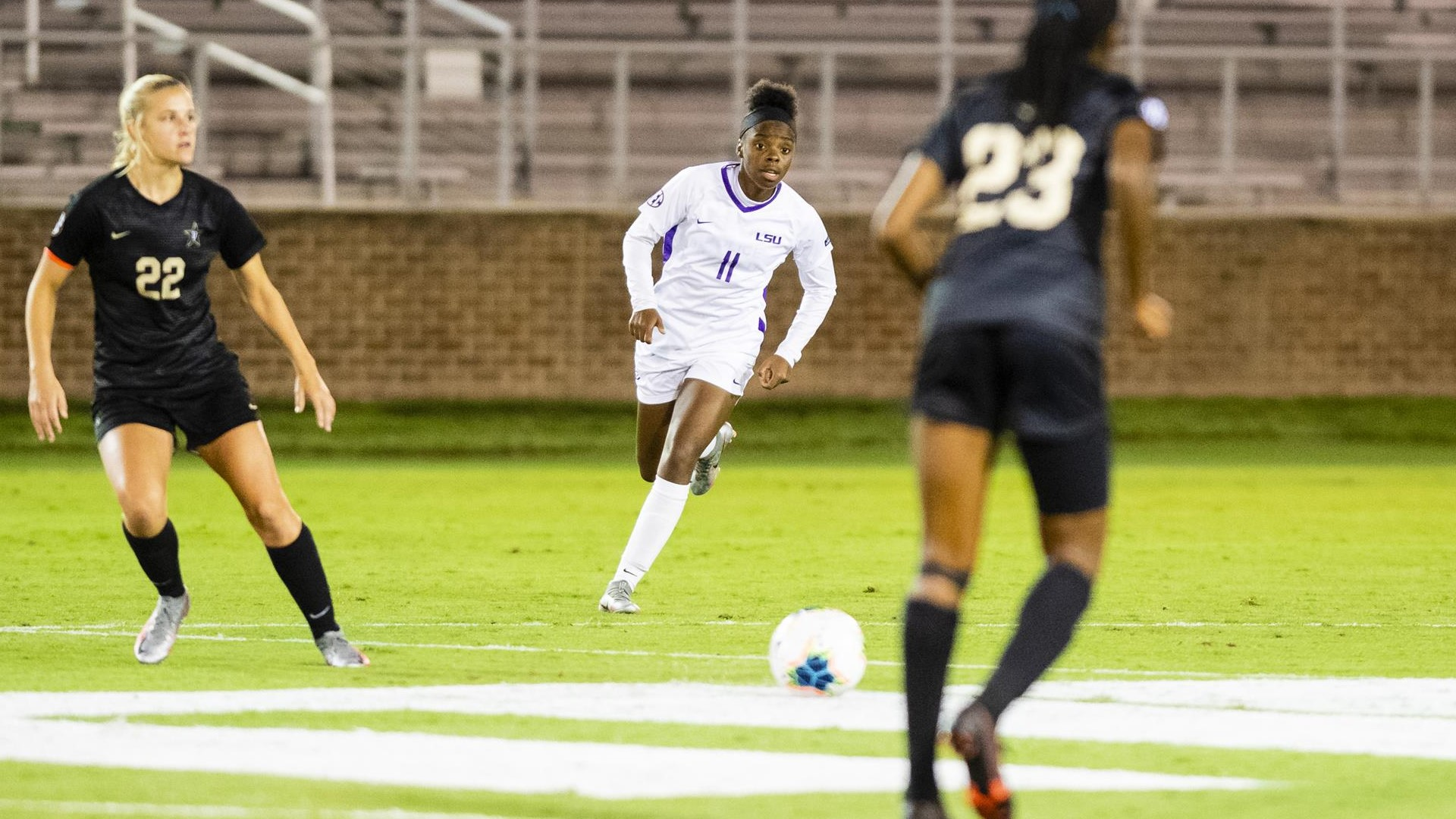 Bryan-College Station, TX. – Redshirt junior Tinaya Alexander scored her third goal of the season with a headed effort in the 26th minute as the LSU soccer team fell by a score of 2-1 on the road versus No. 8 Texas A&M on Friday night at Ellis Field. Texas A&M scored its first goal in the tenth minute from an outside of the box effort by Barbara Oliveiri and then retook the lead in the 36th minute with a goal by Jimena Lopez from the top of the box.

Both teams came out energized and this led to an exciting first half. Sophomore Mollee Swift was called into action for the first time in the sixth minute, denying a goal-bound shot with a diving save to her right. LSU responded moments later in the ninth minute with a chance of its own as junior Meghan Johnson found sophomore Rammie Noel with an accurate through ball; with Noel’s shot from 12 yards out skipping narrowly wide to the right.

Texas A&M scored the first goal of the night less than a minute later. Olivieri received a ball just outside of the box and ripped a shot with her right foot that found the top-right corner of the goal to give the Aggies a 1-0 lead.

LSU absorbed pressure from Texas A&M but did not lose any ground. Swift was called into action once again, saving a shot in the 18th minute to keep the scoreline at 1-0. Swift would finish the game with a season-high seven saves, taking her total for the year up to 29.

The Tigers equalized in the 26th minute. Junior Wasila Diwura-Soale broke into the box and sent in a cross from the right side to find Alexander for a free header from six yards out. With the goal, Alexander’s season tally is up to a team-high three, and six total for her career. The assist is also Diwura-Soale’s first goal contribution in her LSU career.

Texas A&M retook the lead in the 35th minute. Lopez took possession of the ball at the top of the box and cut inside to her right before hitting a rising shot that tucked into the top-right corner for Texas A&M to go up 2-1.

The second half saw both teams defend with discipline and holding each other off to deny clear-cut chances. LSU ramped up the pressure in the final ten minutes of the match looking for an equalizer. The final chance of the match came in the 89th minute when Johnson disposed an Aggie defender outside their box and sent in a shot far post that was collected by Texas A&M goalkeeper Kenna Caldwell.

LSU will compete in the SEC Tournament in Orange Beach, Alabama, beginning on Friday, November 13.