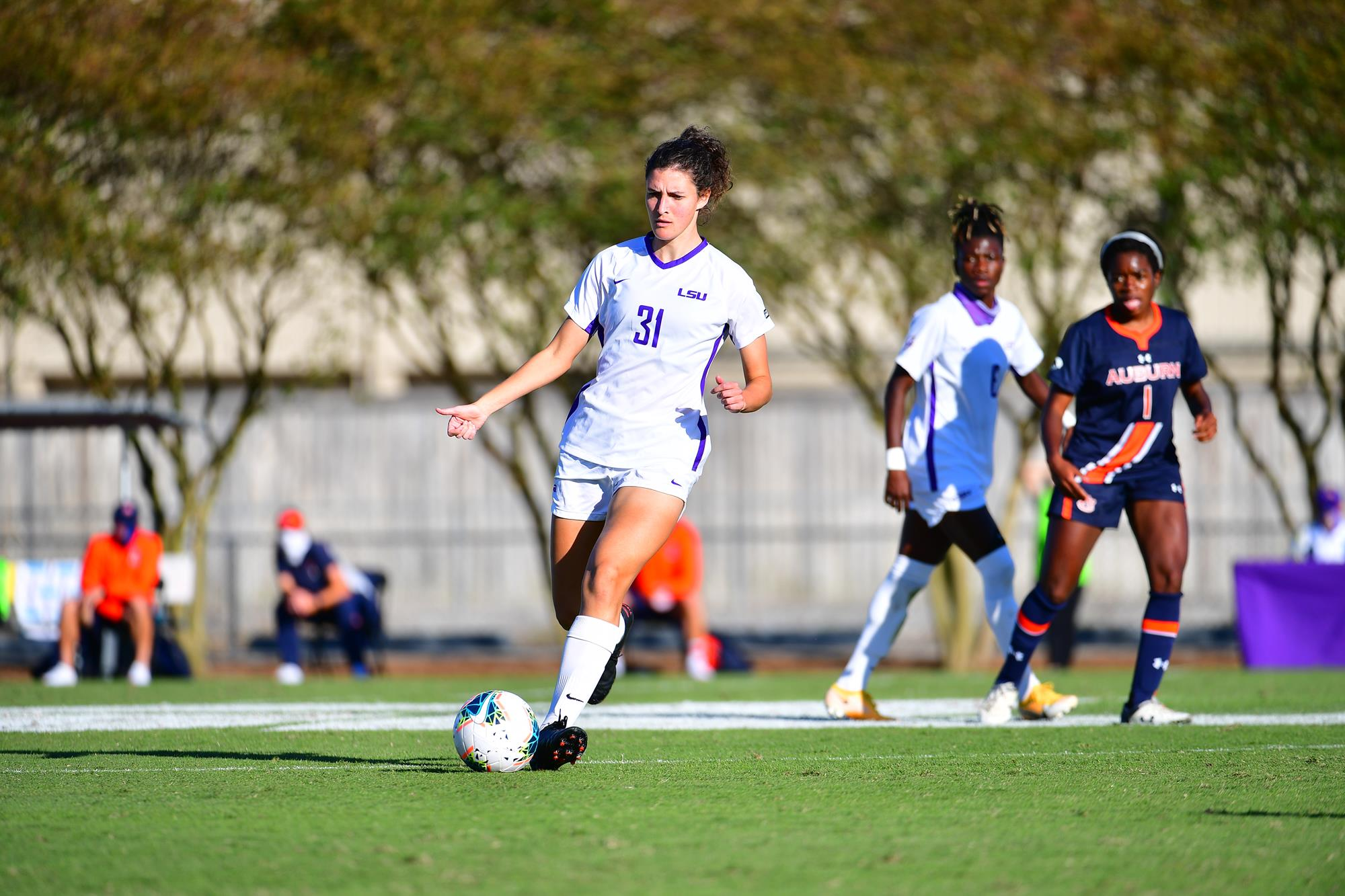 Baton Rouge, La. – The LSU soccer team was defeated by a score of 1-0 after extra time by the No. 15 Auburn Tigers on Monday, November 2, at the LSU Soccer Stadium. The lone goal of the match came in the 93rd minute, when Alyssa Malonson’s cross found Kori Locksley, who tapped in an open goal from six yards out. With the loss, LSU falls to 0-5-2, while Auburn improves to 3-1-2.

The contest was an even matchup, with both teams having held firm to start the match. The first opportunity came in the 21st minute, when sophomore Maya Gordon ripped a shot with her left foot from outside the box that went narrowly wide right.

Auburn responded with a strong chance a minute later, with Sydney Richards taking a shot on an open goal that was cleared before the line by junior Shannon Cooke.

Sophomore Mollee Swift recorded her first save of the afternoon with seconds to go in the first half, catching a shot that was on frame by Anna Haddock. Swift would record one more save in the 63rd minute, stopping a long shot from Hannah Waesch to finish the afternoon with two saves to take her season total up to 22.

The second half was another tight affair, with neither team registering quality chances in the first 20 minutes. LSU was sent down to ten players in the 66th minute when Cooke received two consecutive yellows. Despite playing a player down, LSU kept it shape and did not give up any big chances the rest of regulation and actually went on the offensive for the final 24 minutes regulation.

LSU had two big chances towards the end. In the 82nd minute, redshirt junior Tinaya Alexander latched on the end of a great pass from freshman Lauren Robles in the 18 yard box and beat her defender to get a shot that required a save from Auburn goalkeeper Maddie Prohaska. The final chance of regulation came two minutes later when junior Meghan Johnson beat her defender on the right side of the box and tried to chip the ball into goal, but Prohaska was able to get a hand on it and kept the score at 0-0.

Auburn scored the golden goal in overtime just three minutes in. Malonson beat her defender down the left flank and sent a ground cross to Locksley, who just needed to tap it in from six yards out to claim a 1-0 victory.

The Tigers will conclude their regular season at 7 p.m. CT on Friday, November 6, with a road trip to Texas A&M.