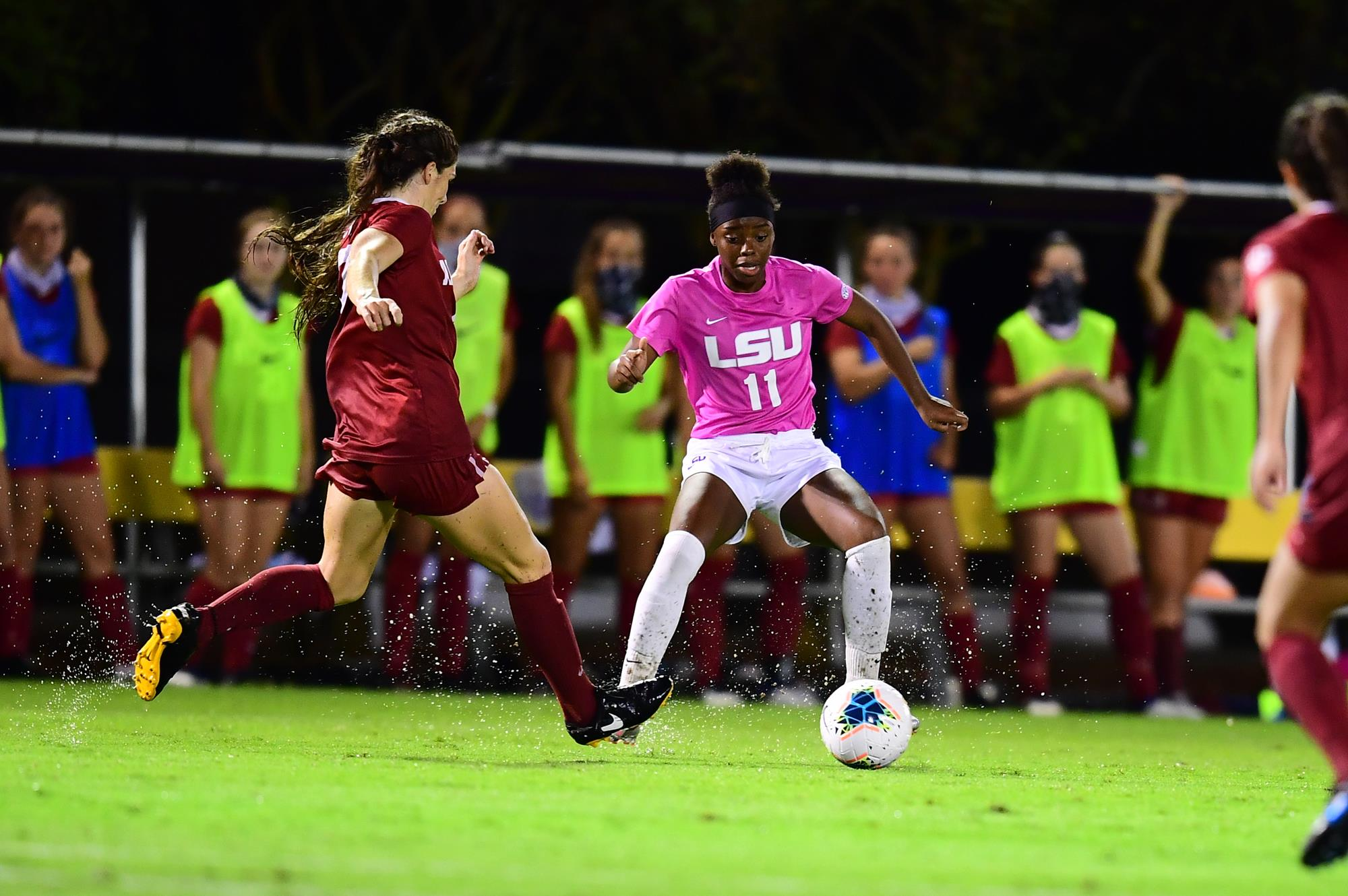 Baton Rouge – Redshirt junior Tinaya Alexander scored two of LSU’s three goals in the 26th and 58th minute as the LSU soccer team drew 3-3 in a feisty match with the Alabama Crimson Tide on Friday, October 23, at the LSU Soccer Stadium. Alabama’s goals came in the 20th and 21st minutes from Carly Wyatt, with the third goal coming from Serena Pham in the 58th minute. The final goal of the evening came in the 77th minute when junior Molly Thompson tapped in a cross from three yards out.

“Credit to Alabama for the way they started the game,” head coach Sian Hudson said. “They certainly had the momentum going into the delay. The stoppage gave us the time to evaluate the early moments and make some tactical adjustments coming out after the break. I’m really proud of the fight the girls displayed to come back from two goals behind to get a point.”

Both teams came out energetic to start the match. Thompson registered the first chance of the evening in the fifth minute, shooting from 18 yards out before having her shot collected by Alabama’s Mckinley Crone. Alabama responded with a chance of its own, with Casey Wentz’s shot from 15 yards out went wide left. Junior Meghan Johnson had a chance in the 18th minute, with her shot from outside the box requiring a save from Crone.

Alabama scored the first goal of the match in the 20th minute. Casey Wertz’ cross from the right byline found Wyatt, whose header from ten yards out ended up in the top left corner of the goal to give the Crimson Tide a 1-0 lead. One minute later, Wertz doubled her tally on the night after pouncing on a scuffed clearance from 12 yards out and putting the ball in the bottom right corner to give Alabama a 2-0 lead. Immediately following the goal, the game was halted due to lightning in the area.

The Tigers came out of the break strongly, scoring their first goal of the match in the 26th minute. Johnson found Alexander with a through ball on the right side of the box, with Alexander slotting it in the bottom right corner from nine yards out. The goal was Alexander’s first of the season, and Johnson’s second consecutive game with an assist.

Sophomore Mollee Swift registered her first save of the match in the 50th minute, a tame shot towards the center of goal. Swift finished the evening with four saves to take her season total to 18.

Alabama took a 3-1 lead in the 58th minute off a corner. The corner deflected off a few bodies in the box before it trickled to Pham at the top of the box, who sent a shot with her left foot across the goal and into the top-right corner.

The Tigers responded almost immediately, cutting the deficit in half with a goal in the 59th minute. Freshman Lauren Robles capitalized on the goalkeeper losing the ball in the box and finding Alexander to her right, who slotted the ball into an open net from five yards out. The goal was Alexander’s second of the night, with Robles’ making an impact in her first career start with the first assist of her career. The brace was Alexander’s second of her career, with the first coming in 2017 during her freshman campaign versus Mississippi Valley State University.

Swift was called into action two more times in the second half, saving shots in the 60th and 65th minute to keep the score line at 3-2. The Tigers chased the equalizer at the other end, with junior Shannon Cooke forcing a save from Crone in the 73rd minute and once again Crone was called into action a minute later to save Maya Gordon’s long-range effort.

LSU found its equalizer in the 77th minute after freshman Taylor Dobles’ ground cross from the left-flank found Thompson on the far post, who tapped in an open goal from six yards out. The goal was Thompson’s first of the season, and sixth of her career. With the assist, Dobles takes her assist tally to two for the season and is now on a three-game point streak.

The final chance of regulation came in the 83rd minute. Sophomore Rammie Noel beat the keeper to a through ball down the flank and laid the ball off to senior Chiara Ritchie-Williams, with Ritchie-Williams sending a cross to the middle of the box. The loose ball that followed the contested header found its way to Johnson at the top of the box, whose shot aimed for the bottom-right corner sailed agonizingly wide.

The first overtime period had one big chance that came in the 98th minute. Ritchie-Williams received a short corner just outside the box and sent a shot on goal that narrowly sailed over the top of the crossbar.

Sophomore Maddie Moreau picked up her second yellow card of the match in the 104th minute, sending the Tigers down to ten players for the final six minutes. The final chance of the match came in the 109th minute, as Alabama broke away on a counterattack. Despite being outnumbered three players to two, junior Reese Moffatt pressured both attackers, with the final ball from the Alabama player cleared away from goal by sophomore Maya Gordon.

LSU outshot Alabama 16 to 12, with the Tigers registering nine shots on goal compared to Alabama’s seven. The Tigers narrowly won the possession battle, 51%-49%. Alabama edged out LSU in corners, with the Crimson Tide having six compared to the Tigers’ five.