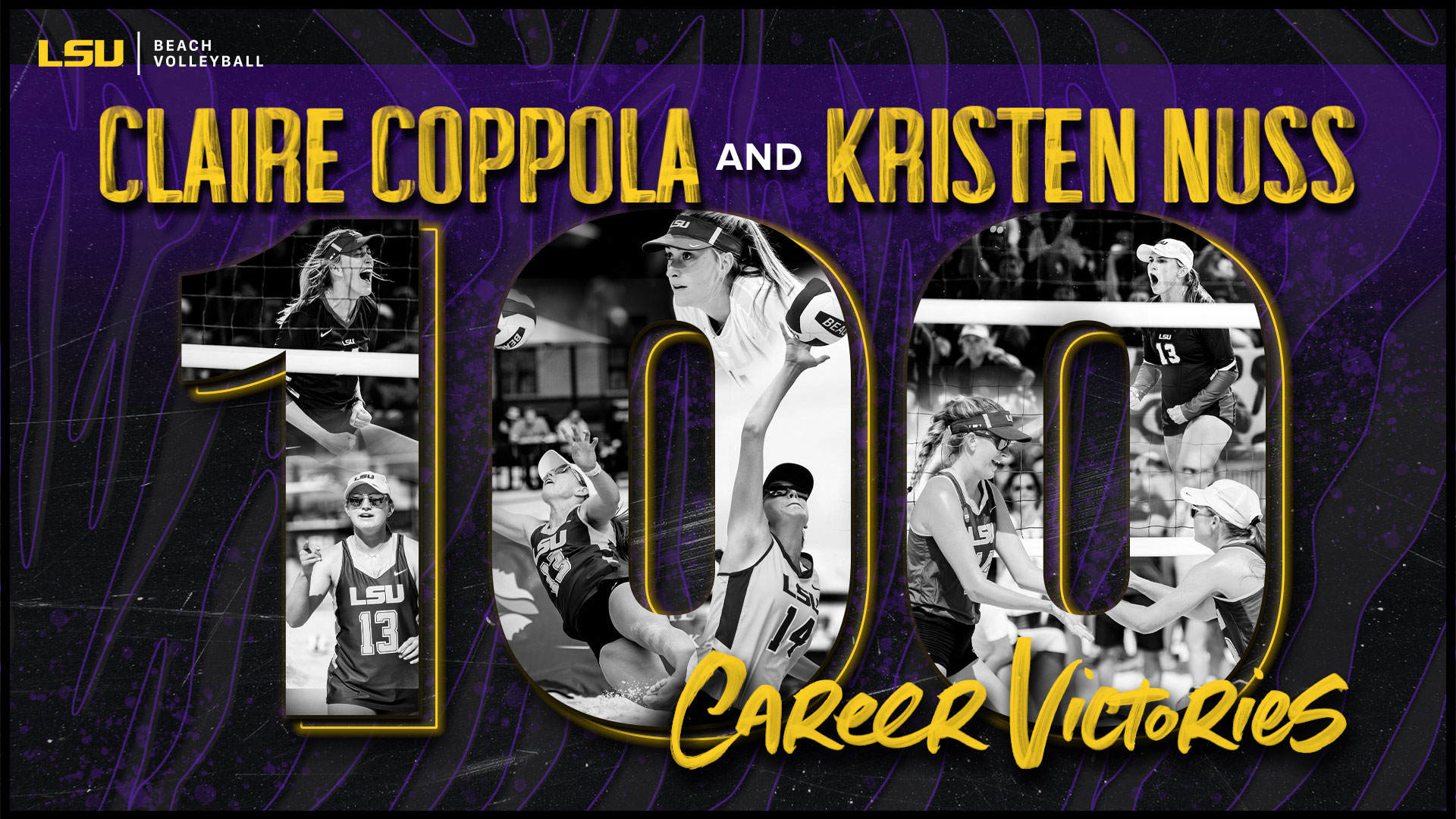 FORT WORTH – Claire Coppola and Kristen Nuss became the third collegiate beach pair to reach the 100-win mark Friday when they won on Court 1 against No. 17 Arizona at TCU’s Fight in the Fort.

Coppola and Nuss, both seniors, have played every collegiate match together since 2017 when they were freshmen. They join USC’s Kelly Claes and Sara Hughes (147-4) and UCLA’s twin pair of Megan and Nicole McNamara (109-30) as the only collegiate beach pairs to reach 100 wins.

Of their 100 wins, 86 have come in straight sets. With all their personal success though, they have continued to push those around them. Their freshman season was 2017, just the fourth year of the LSU Beach Volleyball program. With Coppola and Nuss on Court 1, they have helped lead the program to national prominence, most recently exemplified by its first No. 1 ranking earlier this week.

“They are superstars in their sport, they’re not superstars in person,” said Brock. “They’re down to earth. They’re humble. They have a great mentality and work ethic. They totally buy into to serving their team and understanding their ability to impact our success.

“It doesn’t come from them flaunting their own success, but by empowering those people around them.”

Nuss is a 5-6 defender from New Orleans. What she lacks in size though, she makes up with excellence in ever part of her game. She has instincts to know where an opposing player will hit the ball and has the ability to glide quickly across the sand and get a touch on nearly every ball. Nuss has been named CCSA Preseason Player of the Year in each of the past two season.

“It’s not just that she’s so dominant,” said Brock, “it’s that she is overcoming apparent disadvantages and still is way above the curve in her ability to be excellent.”

Coppola is the yin to Nuss’ yang. Standing seven inches taller than her partner at 6-1, the Scottsdale, Arizona native is more of your prototypical beach volleyball player. Her long body allows her to make impactful plays at the net and her will to win is second to none. Together, Coppola and Nuss have a chemistry that can’t be taught.

“Claire on her own,” said Brock. “I’ve never seen anybody that has that desire to beat somebody and not be defeated more apparently.

“They are successful because of each other. They draw on each other to become better players emotionally with their energy.”

LSU’s dynamic duo began their careers together on Court 2. They made their first appearance on Court 1 in their fifth collegiate match, where they fell to USC’s Claes and Hughes. In the following match they returned to Court 2 and bounced back with a win. They continued to reel off win after win, jumping between Courts 1 and 2.

With 10 wins in 11 matches following their loss to Claes and Hughes, Brock decided to put them on Court 1 on April 1, 2017. The went on to win their next 10 matches and became fixtures on Court 1 for the Tigers.

“They overachieved,” said Brock. “We knew that if we put them in tough situations, they were going to rise up probably higher than they reasonably could be expected to do. When that quality of that pair became evident, they were our best shot to win on Court 1.”

With Coppola and Nuss leading the way on Court 1 the Tigers reeled off 24-straight wins, propelling them to their first bid to the NCAA Championship Tournament, where the top eight teams get invited to Gulf Shores, Alabama every May to compete for the National Championship. Coppola and Nuss finished their freshmen season going 27-7 (18-6 on Court 1).

“It was a great opportunity – kind a forged by fire thing,” Brock said of Coppola and Nuss playing on Court 1 as freshmen. “They just set the tone, really for their career.”

LSU returned to the NCAA Championship in each of the next two years – both years in which Copolla and Nuss were named CCSA Pair of the Year and All-Americans. Now in their final season, Coppola and Nuss are looking to make it four trips to Gulf Shores in four years. The Tigers were ranked No. 1 in the country on Monday for the first time in program history.

In their sophomore season and each year since, Coppola and Nuss have played every match on Court 1. They opened their sophomore year with an eight match win-streak and came back later in the season to win 14-straight. They went 31-8 in 2018 and earned their first CCSA Pair of the Year honor and LSU was back in Gulf Shores.

The University Games, held in Munich, Germany featured 32 collegiate beach pairs from 29 countries. Coppola and Nuss, representing America, swept through pool play and ultimately finished in fifth place out of the top collegiate competition around the globe.

Entering their junior year, Coppola and Nuss had made a name for themselves and everybody could not wait to see where they would lead the Tigers in the first year of LSU Beach Volleyball Stadium. They improved their win total once again, winning 33 matches and dropping just 4.

Their success on Court 1 transferred to team success for LSU as the Tigers made it to the NCAA Championship Tournament for the third straight season. For the first time in program history, LSU won its opening match in Gulf Shores at the double-elimination tournament. Coppola and Nuss won their match against Pepperdine’s Brook Bauer and Heidi Dyer, 21-19 and 21-18, as LSU defeated the Wave, 3-0.

Going through the winner’s bracket for the first time, LSU faced Stetson in the second round. Once again, Coppola and Nuss won in straight sets, 21-14 and 21-16. LSU went on to win the match, 3-2, after Allison Coens and Hunter Domanski won in three sets on Court 5 with the match tied at two courts. For the first time in program history, LSU advanced to the NCAA semi-finals and finished as the No. 3 team in the nation.

For their dominant performance throughout the 2019 season, Coppola and Nuss became the first pair to be named CCSA Pair of the Year in back-to-back seasons.

Following their dominant junior season, Coppola and Nuss traveled, once again, to Hermosa Beach for the USAV Collegiate Beach Championship. Just like in 2018, Coppola and Nuss went through the week unscathed and won the title. They earned the opportunity to train with USA Volleyball throughout the Summer.

Coppola and Nuss have continued to help LSU achieve greatness this season. They have won matches on the top-court against UCLA, the two-time defending national champions, in two consecutive weeks, helping LSU launch in to the No. 1 spot in the polls. LSU as a whole team and Coppola and Nuss are each 9-2 on the young season.