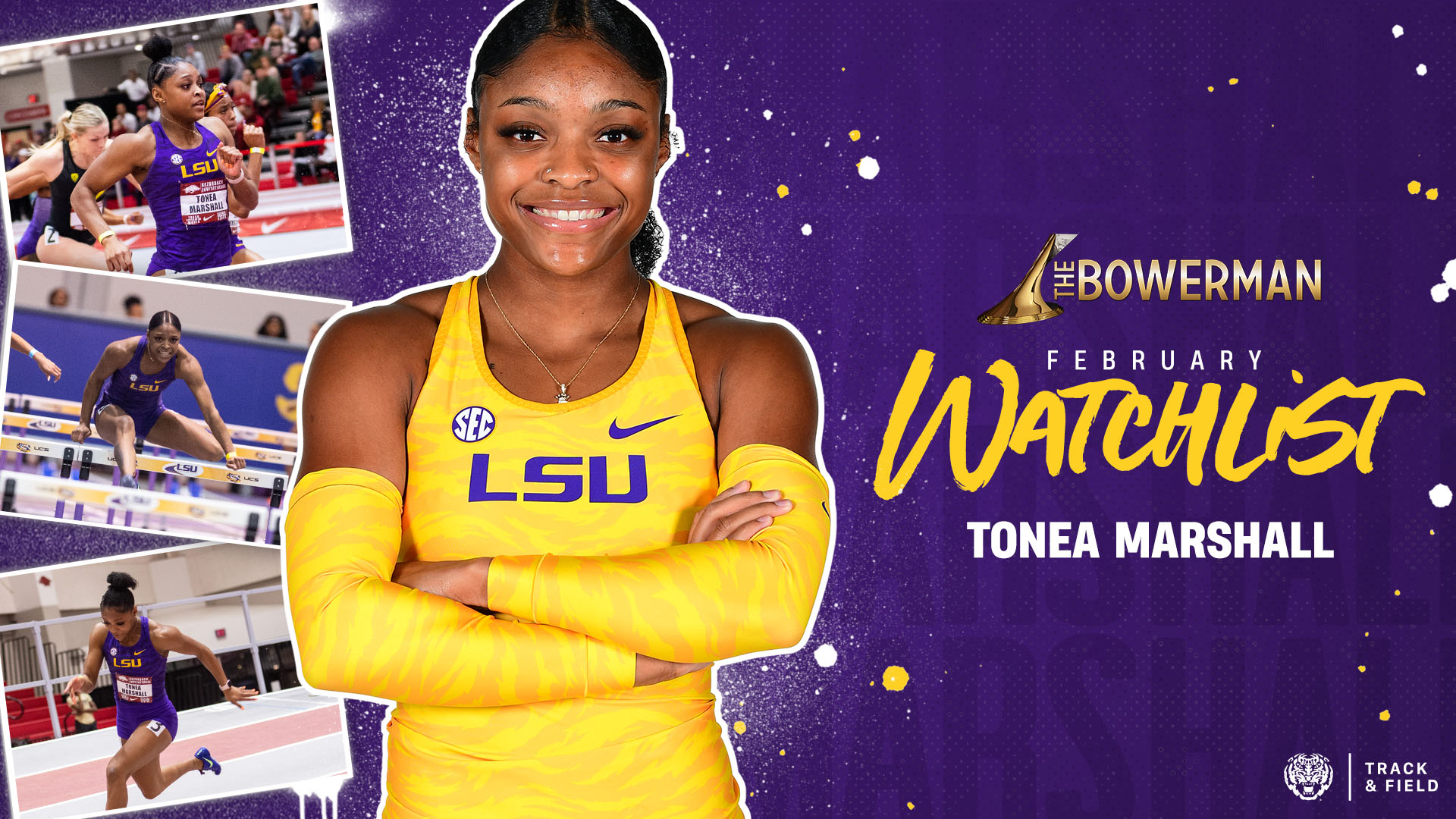 Baton Rouge, La. – Tonea Marshall, a senior on the LSU track and field team, made her first-career appearance on The Bowerman Watch List (February edition) on Wednesday afternoon as it was announced by the U.S. Track & Field and Cross Country Coaches Association.

Marshall’s senior season has seen her set personal bests in all three of her events (60 meter hurdles, 60 meter dash, 200 meter dash), but it’s been her spectacular hurdling that has worked her into the list of the top 10 collegiate track and field athletes in America. She becomes the seventh woman in LSU track and field history to be named to the watch list.

Marshall clocked a personal best of 7.86 in the 60 meter hurdles on January 18 at the Corky Classic to become the third-fastest performer in NCAA history at her second meet of the season. Coming into the Corky Classic, Marshall had never cracked eight seconds in the 60 meter hurdles with a prior personal best of 8.04. Then boom, she dropped her time of 7.86 and etched her name in the USTFCCCCA record book. She’s the third-fastest 60-meter hurdler in NCAA history with the fifth-fastest time overall. Brianna Rollins (7.78/Clemson/2013) and Virginia Powell (7.84/Southern California/2006) are the only two collegians to have gone faster.

Marshall’s time of 7.86 set the LSU school record, it currently leads the NCAA, and it is the fourth-fastest time in the world for 2020. The 7.86 broke Jasmin Stowers’ school record of 7.94 that was run in 2014. In addition to the 7.86, Marshall has run times of 7.92 (Razorback Invitational/finals) and 7.98 (Razorback Invitational/prelims). Only one other collegiate hurdler has cracked eight seconds in 2020.

In her other events, she has set personal bests in the 200 meters with a 23.74 at the Razorback Invitational and 7.32 seconds in the 60 meter dash at the MLK Jr. Invitational. Marshall joins LSU alums Sha’Carri Richardson (2019 winner), Kimberlyn Duncan (2012 winner), Aleia Hobbs (2018 semifinalist), Kortnei Johnson (2019), Mikiah Brisco (2018), and Semoy Hackett (2011) as LSU athletes to be recognized by The Bowerman committee.