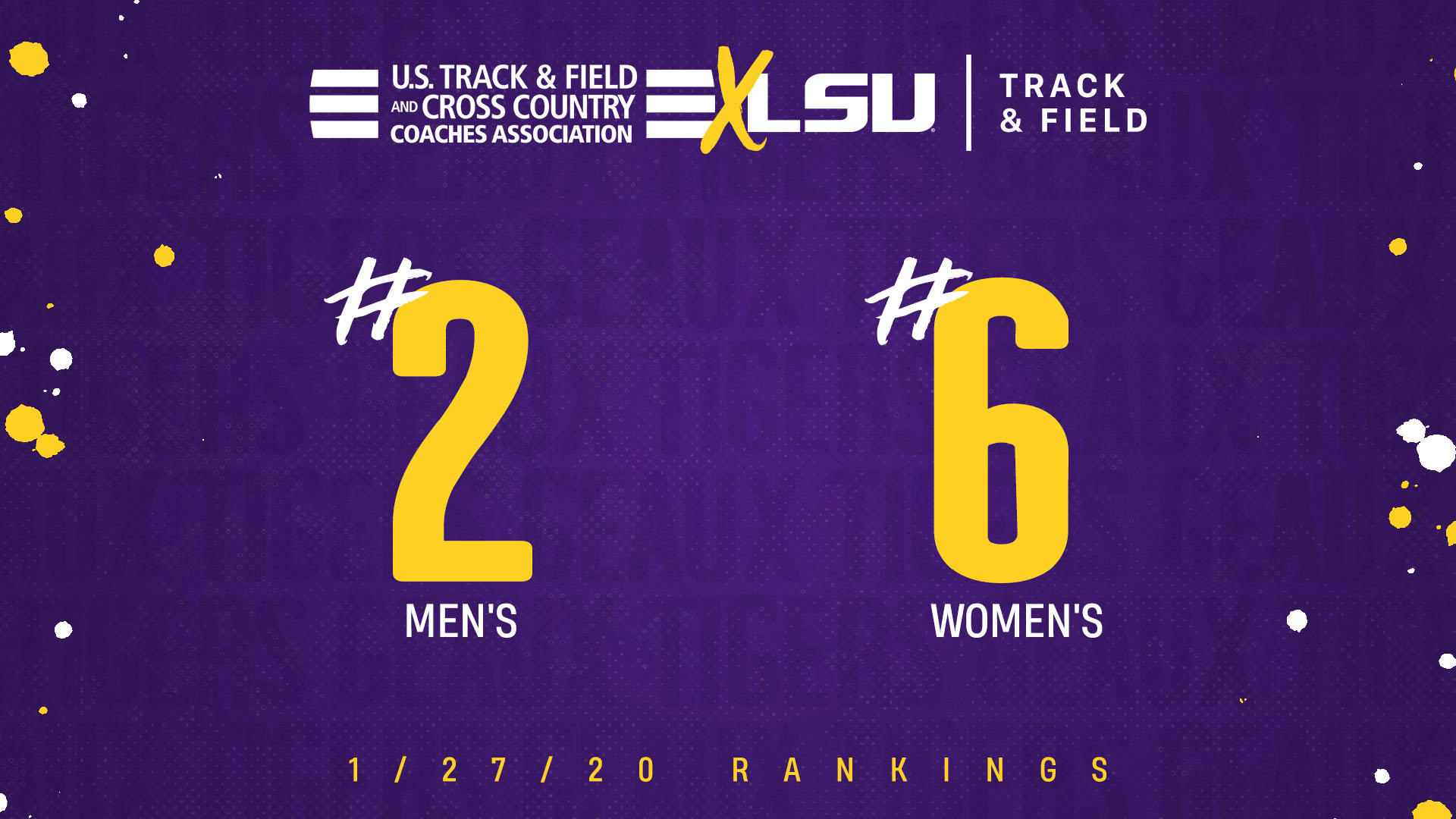 Baton Rouge, LA. –  The U.S.Track & Field & Cross Country Coaches Association rankings were released Monday afternoon and the men’s team remained in the No. 2 spot, while the women’s squad moved up ten spots to become the sixth ranked team in the nation.  LSU is one of five schools in the country to have both the men’s and women’s team be ranked in the top ten.

The second nationally ranked men’s team has lived up to their preseason ranking of number two as they impressed in their first three competitions of the season.  Senior standout Rayvon Grey set the NCAA season best distance in the long jump in his season debut at the Purple Tiger Invitational.  His leap of 26′ 4.5″ (8.04m) still stands as the top mark in the NCAA this season.  JuVaughn Harrison also has also registered a NCAA top 10 mark this season as he holds the second highest clearance in the high jump competition this season.  Harrison won the high jump competition at the Corky Classic with a clearance of 7′ 5″ (2.26m).  He also etched his way into the NCAA top ten in the long jump with a distance of 25′ 3.25″ (7.70m) which is currently the ninth best mark this season.   Junior runner, Terrance Laird entered the NCAA top ten list in LSU’s most recent meet, the MLK Jr. Invitational, with his performance in the 200 meter dash.  Laird finished in second place with a altitude-converted time of 20.77 which is the third best time in the NCAA this season.  Both Damion Thomas and Eric Edwards Jr. both made their way into the NCAA top ten in the Corky Classic where Thomas and Edwards Jr. placed first and second, respectively.  Thomas’s altitude-converted time of 7.71 is the fourth best time whereas Edwards Jr.’s time of 7.73 at altitude ranks as the sixth fastest finish in the NCAA this season.

The women’s team was able to move all the way up to sixth in the USTFCCCA rankings due to a several top ten performances this season.  Tonea Marshall has put together one of the most impressive outings this season when she ran an altitude-converted time of 7.88 in the 60 meter hurdles which ranks her as the fastest hurdler in the NCAA this season. That performance made her the third-fastest runner in NCAA history in the event, set the LSU school record, and it is the second best in the world. For that performance Marshall was named the USTFCCCA National Athlete of the Week. Mercy Abire also broke into the NCAA top ten list at the Corky Classic with her leap of 21′ 1.5″ (6.44m) in the long jump which currently ranks as the second best distance of the season.  Abby O’Donoghue’s clearance of 6′ 0.75″ (1.85m) in the high jump at the MLK Jr. Invitational ranks as the second highest clearance in the NCAA this season.  Lisa Gunnarsson put together a NCAA top ten performance in her season debut at the Purple Tiger Invitational.  Gunnarsson cleared a height of 14′ 7.25″ (4.45m) in the pole vault which is the third best mark in the NCAA this season.

The LSU track and field team will be back in action on Friday January 31 where they will begin two days of competition in the Razorback invitational. A list of USTFCCCA rankings can be found at ustfccca.org.

@ Times converted due to altitude