Undefeated Team Goes Down In BR For Second Straight December. 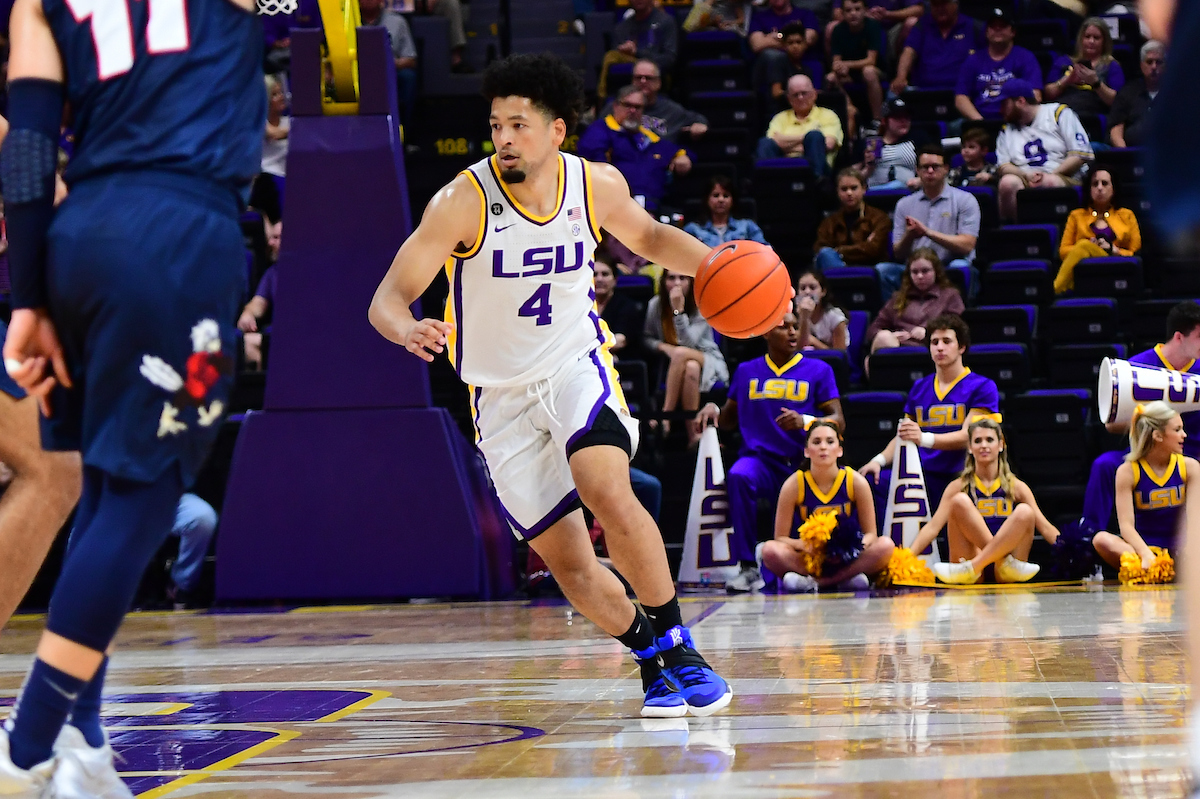 BATON ROUGE – For the second straight December, LSU put the first loss on one of the country’s last remaining undefeated teams as the Tigers scored an impressive 74-57 win over Liberty Sunday afternoon at the Pete Maravich Assembly Center.

LSU is now 8-4 after playing what Coach Will Wade called possibly his team’s best game of the season. The Tigers shot 62.1 percent in the second half, had a 46-20 game advantage in points in the paint and an amazing 23-0 advantage in points off turnovers.

Helping that was a season low of six LSU turnovers, just one in the final 21 minutes of the game.

The Tigers were methodical against a team that was second in the nation in points allowed at 51.6 a game, No. 17 in the NET rankings and receiving votes in both the AP and USA Today polls. LSU shot 53.3 percent from the field (32-of-60) with four treys and 6-of-7 at the free throw line.

Liberty, which opens ASun play on Thursday, hit 20-of-49 shots with eight treys with 9-of-9 at the line. Scottie James and Darius McGhee had 12 points each to lead the Flames, while Georgie Pacheco-Ortiz had 11 and Caleb Homesley 10.

There were eight lead changes in the early part of the game before the Tigers began to assert themselves. Down one with 3:18 to go in the first half, Trendon Watford scored on a jump shot and got a layup to make it 27-24, LSU. Manning hit a jumper to make it 29-24 and after a Liberty bucket, Watford took and hit LSU’s first three-point attempt in 12 minutes to send the Tigers into the dressing room up 32-26 at the half.

LSU continued to keep Liberty at bay early in the second half and the shooting percentage kept rising. LSU hit just 9-of-their-first-25 shots before hitting 9-of-13 field goals to remain up 41-35 with 15:07 to play.

The Tigers would pretty much put the game away with a 9-0 run that saw the margin go from seven, 46-39, with 13:01 to play to 16 at 55-39 with 10:25 to play. That sequence was finished by a steal and an emphatic dunk by Emmitt Williams that broke the net and eventually led to a 13-minute delay while Maravich Center crew members replaced the net.

The delay did not hurt LSU overall as Liberty could only get the game down to eight points, 57-49, with seven minutes to play before the Tigers expanded the game to the final margin.

LSU will now prepare for Southeastern Conference play beginning on Saturday at 11 a.m. when they travel to Tennessee for an 11 a.m. contest that will be televised on ESPNU and broadcast on the LSU Sports Radio Network. The Tigers first home SEC game will be on Jan. 8 at 8 p.m. against Arkansas. Tickets for that game are available at LSUTix.net.

“Just a great win. I thought we did a great job of establishing ourselves in the paint being able to score 46 points in the paint against a defense as good as theirs is tremendous. Very, very proud of our guys. Very pleased with our effort. I thought we did some really good things and we’ve got to build on it as we move into SEC play.”

Charles Manning’s performance in the game …
“I thought Charles Manning played a really good game. I thought Aundre Hyatt played really well. I thought those guys came off the bench and did a really nice job for us. Very pleased with them. Very proud of their effort. We’ve got to keep building with this with Charles. He has the potential to do this a lot more and got to stay consistent and moving forward.”

23 points off turnovers. Have you seen that before in a game?
“No. It’s a crazy stat. But I’m proud we only turned it over six times. That was really good. That was one of those you don’t see very often.

Sense of urgency for this team?
“We need a little sense of desperation, urgency; they’ve heard those words. Look we need to play a little more desperate. We need to play smarter. Play with an edge today and maybe we played our best game. This game and the Southern Cal game we played really well. We got the scouting report into the game and we have got to continue to improve.

Reaction to the game…
“I think this is the best total game we’ve played all year as far as playing as a team, everybody getting touches, and staying locked in, holding an offensive team to 57 points. We’ve got some momentum going into conference, and we’re trying to go get another SEC title.”

On recapturing the grit and grind…
“We played hard. I feel like we played harder than them. We played with some desperation and we wanted this one really bad.”

On the progression of LSU’s ball movement…
“It’s getting better. We’re just continuing to learn each other and the more we move the ball, the easier it is for guys to get into the game and make plays for us. We have a lot of unselfish guys so sometimes when it’s stagnant it’s hard to make plays. But like I said, as we learn each other, we’re getting better with it.”

On the defense and what about Liberty’s offense that made it work…
“They run great stuff. I think we were really prepared with our scouting report and just locking in on personnel and things like that. At the end of the day you have to execute, and we did a great job of that today.”

On a big day for scoring off of turnovers…
“It’s huge, especially in a game like this where they like to slow the game down and play at a pretty slow pace as far as their tempo. If we could get out and go, we were trying to put our athleticism in the game and get easy buckets.”

On if this was considered a “must-win” game…
“Definitely. Our backs were against the wall so we knew we had to come out and play hard to get the win. For the most part, Coach (Wade) was telling us to play hard and take it game by game until we get the results we want. Liberty’s a good team, so Coach harped on playing smart, hard, and focused.”

On having an increased sense of urgency heading into SEC play…
“Like you said, heading into SEC play we had to start it with a win. With the situation we’re in right now it was kind of tough because we lost some unfortunate games. Now we just have to fight our way out of the hole.”

On what was key to his offensive performance this game…
“Staying aggressive and not settling. I shot a couple of jumpers, but once I saw how easy it was to attack, I had that aggressive mindset.”

On if he considered this a “breakout” game…
“I’d probably call it one. Liberty’s a big team that came in here undefeated and will probably win the ASUN, so I’d kind of call it a breakout game. There’s a lot of more games left though, so I have to stay focused and play my role.”

On outscoring Liberty in points off turnovers…
“This week Coach has been on us hard about playing solid and valuing the ball. When we got the turnovers, we knew what to do and we put it in the hole. Coach kept it simple with the plan. He wanted us to single-side ball screen and get to the one-man side and just score the ball and play off that.”

On his quick start to the game….
“I was very calm. Sometimes I get too excited and things don’t go my way, but today felt different. There was more of a desperation feeling that we had to get this win. Everyone did their job and had to do everything they could so we could get that win.”

On what they saw in Liberty’s defense that made them attack the paint…
“A lot of holes in their defense. For example, I scored most of my points on the backside because there was no one over there. Then, when they slid over to help, we were able to pitch the ball or convert on that and score.”

On Charles Manning Jr.’s performance…
“He had a great game. He’s a worker that been worked hard all summer and fall. He’s been one of our best defenders and today he was doing his thing on offense. I hope he has a couple more games like that, we have a long season to go! He’s going to be fine, I think everything’s going to go in the right direction for him.”

Opening statement…
“Disappointed. It didn’t transpire in the way I’d hoped. There were a lot of small indecisions throughout the game, poor shot selection, turnovers, when you give the team 23 points off your turnovers, that’s a problem, and then 46 points in the paint. We give up 51 a game so all of that led to me, don’t let me take anything away from LSU, they’re very motivated and played very well and took advantage of their size and length advantage, and we didn’t do the best job that I think we could’ve done in order to sustain that streak.”

On the net needing to be replaced mid-game…
“That didn’t have any effect on it. We got way out-of-character because typically when we have a deficit, we do a good job of making sure that next possession is valuable, and we hung our head a little bit. We’ll learn from it and again, this is a really talented team that had a lot of time to prepare for us. Mind you, their losses are a two-point loss to Utah St., a two-point loss to USC, East Tenn. St. got away from them and VCU was a one-possession game up until the last minute. They’re a good team and so are we. We’ve got a chance to take a day off and then start league play.”