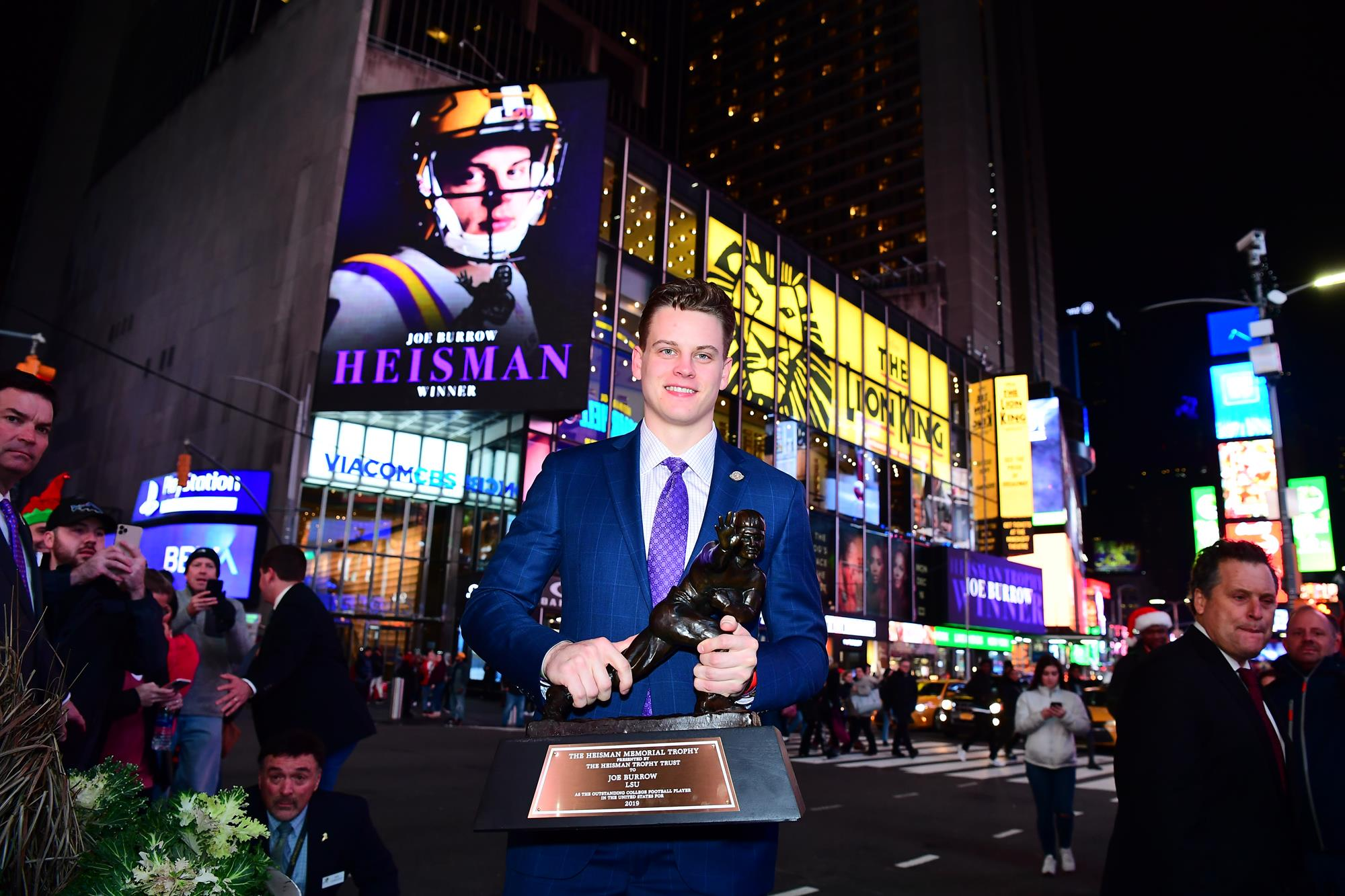 NEW YORK — The camera pointed at Joe Burrow, and he knew his moment had arrived. As the lens focused on him, Burrow tucked one arm in, stuck the other out, and lifted his leg, stiff-arming an imaginary defender.

His body formed the Heisman pose, and his mouth formed a wry grin.

“Are you kidding me?” the photographer said, removing his eye from behind the lens to chastise the nine-year old quarterback for the Athens Bulldogs. “Put your foot down.”

Little Joey listened, placing his foot on the gold and green helmet while his smile slowly disappeared.

Why wouldn’t he be? Burrow wasn’t merely being a cocky nine-year old.

He was being prophetic.

The 2019 Heisman Trophy Burrow won Saturday night in New York City has destiny’s fingerprints all over it. From fourth grade football photo day in Athens, Ohio, to Times Square 15 years later, signposts of serendipity have guided Burrow on his journey from Heisman imitator to Heisman winner.

The Burrow family certainly knows what a Heisman winner looks like. Jimmy Burrow, Joe’s father, played at Nebraska with 1972 winner Johnny Rodgers, who sat in the second row Saturday night. On the other side of the aisle sat Eric Crouch, who played with Joe’s brothers, Jamie and Dan, when he won the award in 2001 for Nebraska, where Jimmy was on staff with Frank Solich.

Over the Burrows’ shoulders, meanwhile, hung a portrait of Billy Cannon, who claimed the trophy for the Tigers 60 years ago and has held the title as LSU’s only Heisman winner ever since. On the plane ride into New York City this week, Burrow read a letter from the Cannon family: his wife, Dot, and his daughter, Bunnie.

“She said that he would be so happy looking down on me. And that meant so much to me,” Burrow said Friday. “They said he was a tough guy just like me, and they said we would have been best friends. So I would have loved to meet him. They see a lot of me in Billy.”

Cannon paved the path for Burrow, and now the two will walk it, side-by-side, forever. One Tiger legend died, just as another was born. The same day Burrow signed with LSU – May 20, 2018 – is the day Cannon passed away at the age of 80.

The omens are everywhere. Two of Burrow’s fellow finalists are Ohio State stars, the school from which Burrow transferred to LSU. The Buckeyes were by far Burrow’s best offer coming out of high school. Nebraska, his dream school, passed on him twice, as an undergrad and as a transfer, as did a number of other schools who questioned his arm strength and tools. Burrow never questioned anything except when he would get his chance. He always knew he would make the most of it.

“I think if you asked the guys at Ohio State how good I was when I first got there they would tell you that they would’ve taken my scholarship away,” Burrow says. “I’ve come a long way. What those schools didn’t account for was, I feel like I’m going to be the hardest worker out there. I’ve worked for this.

Belief – in the hard work he put in and the football gods guiding his path – brought Burrow here. On Saturday, that faith became fact, that dream, a reality. Those gods smiled down on Burrow, the newest member of football’s most exclusive fraternity.

It’s a club Burrow is thrilled to be a part of, but he also stands alone in Heisman history. No player has ever won the award by such a margin – he received a record 93.8% of total possible points, was named on a record 95.47% of ballots, and received a record 1,846 more points than the runner-up, Jalen Hurts – and he may very well end up as the all-time leader in completion percentage, touchdowns, yards, and passer rating among the trophy’s 80 winners.

Before the show and during it, Burrow was, as usual, the epitome of cool. He took three naps and played Pokemon (“I almost beat it,” he said while getting dressed). He didn’t prep a speech, (“Just going to wing it,” he said), but he delivered a masterpiece, thanking his offensive line first and working his way from his family to Ed Orgeron, southeast Ohio, Louisiana, and all the hands who played a part in his success. He fought back a few tears, and he elicited many more.

“That’s the most I’ve cried in 23 years of living,” Burrow says.

Burrow alternated between a lumpy throat and a proud smile Saturday night, but he struck no poses. He learned that lesson long ago, when a nine-year-old son found his father less than thrilled with his photo day antics.

“That photo was locked away for many years from that day,” Jimmy laughs.

It’s back now, proudly displayed for the last few weeks in the Burrow’s basement. Jimmy and Robin brought it back out among Joe’s massive collection of trophies as his inevitable journey to the Heisman grew clearer and nearer. Like Burrow, it’s a once closely-kept secret the world now knows all about It’s too good to be true and too true to forget. It’s history, and it’s prophecy. It’s fate manifest, covered in the fingerprints of destiny, blessed by the football gods, and earned through hard work and unwavering faith.

And it’s got company on the way.

“We’ll have to make something at my house in Athens,” Joe says. “I have all my high school trophies in my basement. Might have to extend that wall a little bit.”