In His Tiger Stadium Finale, Joe Burrow Has the Final Word 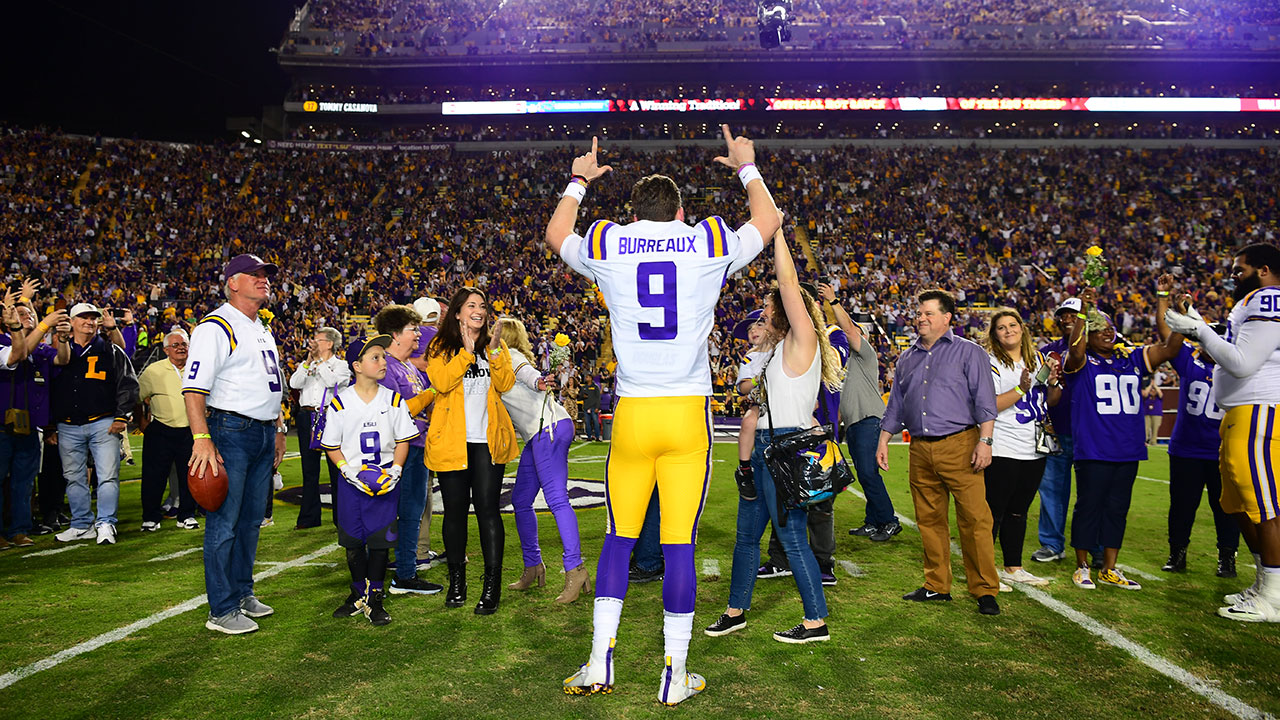 Even if he were the loquacious type – he’s not – there wouldn’t have been much point.

For one, no one would have heard him. As he ran out of the tunnel for the final time as a Tiger, the last senior of 14 honored Saturday night before LSU demolished Texas A&M 50-7 to finish the 2019 regular season a perfect 12-0, 102,000 voices sounded like 102 million. So loud did they greet their sure-to-be, soon-to-be Heisman winner that anything he uttered would’ve simply drowned in their deafening roar.

At no point did Burrow utter a syllable. Maybe he was too choked up, overwhelmed by the emotion of the moment. Maybe he was too focused, intent on dishing out revenge on A&M after last year’s seven-overtime defeat in college station.

Or maybe, as he blew into his hands, after hugging every family member present, he had already said what he wanted to, and no one had seen it yet. Maybe he’d realized earlier in the week there was only one way to say everything he wanted to say, but had no idea how. Maybe he had snuck a message to the equipment staff, and they delivered in the form of the name etched on the back of his jersey, which he now turned to show the crowd, his thumbs pointing back over his shoulders, his mouth, like his crunch-time pulse, a flat, closed line.

Eight letters above No. 9: “Burreaux.”

The 102 million heard the message loud and clear, and they roared back.

I’m one of you, his implied declaration spoke.

You’re one of us, their collective response echoed.

“I thought it would just be just be an awesome tribute to the state, and to the university,” Burrow said of the Francophonic antonym affixed to his surname after the game. “I think it was great.”

Burrow’s long preferred walking the walk to talking the talk. On Saturday, his pre-game jersey – he changed back into his traditional “Burrow” kit before kickoff – spoke deafening volumes, but that was far from the only statement he made.

“I thought I was getting another whole series,” Burrow laughed after the game. “They told me I was going in for the whole series. I was getting ready to get the other play, and Coach O pointed at me and said, ‘You’re off.’ I kind of knew that that was kind of my moment to soak it all in, try to embrace the fans the best I could, and all my teammates kind of mobbed me on the sideline, so that was a special moment for me.”

His performance communicated in yet broader terms, still. To those with votes watching on TV from across the country, Burrow looked every bit the part of a Heisman winner, playing in front of 1981 Heisman winner Marcus Allen, who spoke to the team Friday before the game and surely approved of the quarterback in purple and gold. He looked every bit the part of the SEC’s best-ever quarterback, too, setting a new single-season mark for yards (4,336 and counting) and tying the touchdown tally (44 and counting). It’s an offense so good, so dominant that even its chief visionary, head coach Ed Orgeron, didn’t see this coming.

“The efficiency of our offense – I thought it’d be efficient, but not just as explosive and break all these records,” Orgeron said. “We never thought about records.”

Burrow had yet still more to express after the game, when he ran to LSU’s student section after his on-field postgame interviews with the broadcast crews. The students greeted him with chants of “Joe for Heisman.” He returned their love by blowing two-handed kisses and shaking two grateful hands at them all.

“Obviously I don’t go to class, because I take online classes,” Burrow laughed after the game, “so I don’t get to see any of those people. I just wanted to see them for the first time and just thank them.”

Two days after Thanksgiving, gratitude overflowed like gravy on Tiger Stadium’s chewed up postgame turf. The more directed Burrow’s way, the more he returned the favor. On the field, in the stands, there was simply reflection. Crowd looked at quarterback, and quarterback looked at crowd.

“Louisiana’s a special place, man,” Orgeron said. “LSU is special place. When you play for the Tigers, you’re a Tiger.”

“Joe’s meant a lot to Louisiana,” Orgeron added. “Louisiana is very proud of LSU football. People in Louisiana have heart, man. When they love you, they love you. And they love Joe, and Joe loves them.”

It’s a love that’s hard to put in words. But Burrow can do that, too, if he has too. Never mistake his lack of loquaciousness with a lack of eloquence: the Heisman-caliber quarterback can produce Pulitzer-caliber poetry, if the moment calls for it.

He doesn’t say much, but he makes ’em count.

“Death Valley,” he wrote on Twitter after the game. “Where opponents’ dreams come to die…but where mine came true.”

You can’t say it much better than that.

A tribute to this great state and university. Death Valley, where opponents dreams come to die… but where mine came true https://t.co/lGLyAkBLAG