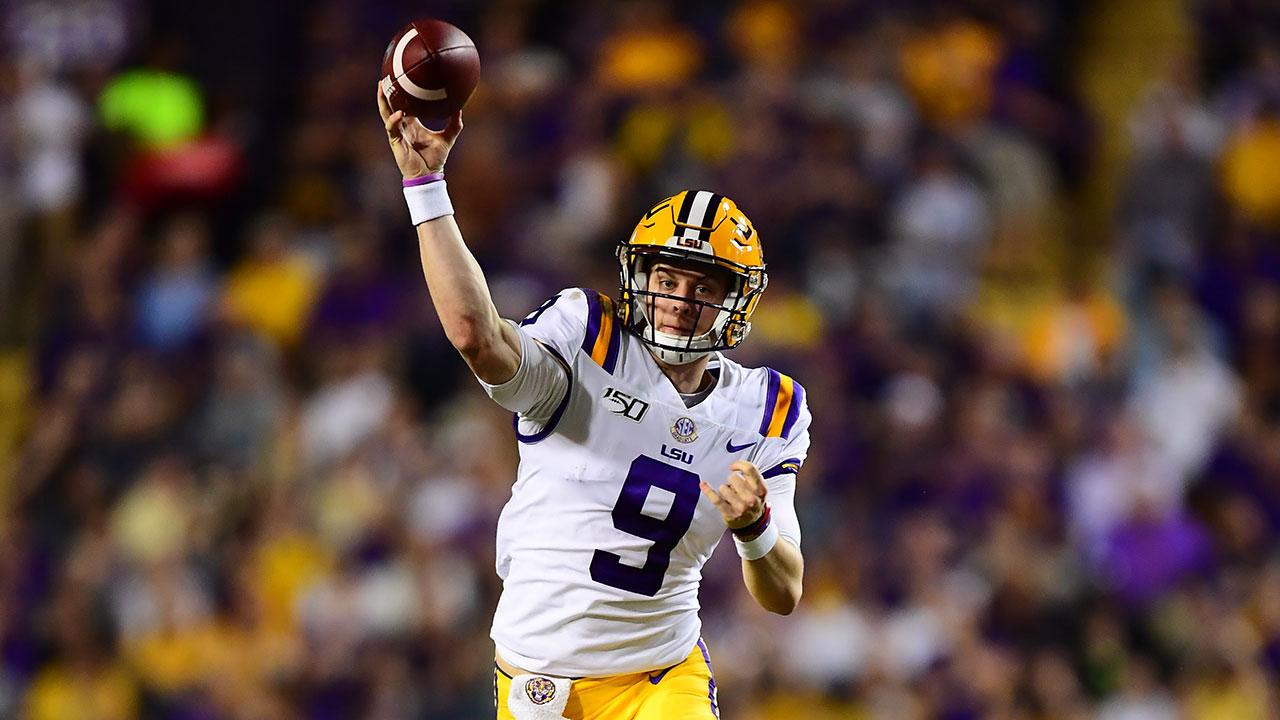 BATON ROUGE — On Senior Night, the most prolific quarterback in LSU history took his final bow on Saturday Night in Death Valley by setting a pair of SEC passing records.

LSU’s Joe Burrow threw for 352 yards and three touchdowns, as top-ranked LSU posted its most lopsided victory in the 58-game series history with Texas A&M, 50-7, to finish the regular season 12-0.

Worsham: Burrow Has the Final Word

Meanwhile, LSU’s defense put forth its most complete performance of the season while holding Texas A&M to seven points, 169 total yards, and 2-of-13 on third down while coming up with a safety and six sacks for the first time in three seasons. The Tigers intercepted Kellen Mond three times, as the Aggies quarterback managed only 10-of-30 passing for 92 yards.

LSU (12-0, 8-0 SEC) will face Georgia on Saturday, Dec. 7, at 3 p.m. CT in the 2019 SEC Championship Game at Mercedes-Benz Stadium in Atlanta. LSU’s has sold out of its ticket allotment, thus fans are encouraged to use the official StubHub marketplace at LSUsports.net/marketplace.

Burrow, who has 4,366 passing yards this season, left to a standing ovation with 12 minutes remaining in the game. He also moved to second on LSU’s career passing yards list with 7,257 – trailing only four-year starter Tommy Hodson (9,115).

LSU wide receiver Ja’Marr Chase continued to be nearly impossible to defend, as the sophomore caught seven passes for 197 yards and two touchdowns. It was Chase’s eighth 100-yard game in 11 appearances this season, as he moved to second on LSU’s single-season receiving yards list behind SEC record holder Josh Reed with 1,457 yards.

Clyde Edwards-Heliare scored his 16th rushing touchdown of the season while running for 87 yards on 18 carries. He also caught four passes for 49 yards.’

Wide receiver Justin Jefferson also scored for LSU – a 12-yard catch in the 21-0 first quarter – and finished with six catches for 55 yards. Jefferson moved to second on LSU’s single-season receptions list with 81 in 2019, trailing only Josh Reed (94 in 2001).

Burrow’s backup, Myles Brennan, tossed his first touchdown of the 2019 season when he connected with tight end Racey McMath for a 58-yard catch-and-run in the fourth quarter.

LSU took the opening kickoff and breezed 75 yards in six plays, with the drive culminating in a five-yard touchdown burst by running back Clyde Edwards-Helaire. The march was highlighted by a 30-yard pass completion from quarterback Joe Burrow to wide receiver Ja’Marr Chase that gave LSU a first down at the Texas A&M 14-yard line.

On its next possession, LSU drove 80 yards on 11 plays to extend its lead to 14-0 as Burrow connected with wide receiver Justin Jefferson on a 12-yard TD strike.

The Tigers struck again with 1:47 remaining in the first quarter, this time on a 78-yard bomb from Burrow to Chase, who galloped untouched into the North end zone. The play marked the longest scoring pass in Burrow’s LSU career, surpassing a 71-yard TD he fired to Derrick Dillon at Auburn last season.

Chase recorded his fifth-straight 100-yard receiving game, the second-most in a single season in LSU history, trailing only Josh Reed’s six straight in 2001.

The LSU lead expanded to 28-0 with 10:46 remaining in the first half when running back Tyrion Davis-Price scored on a four-yard rush, capping a 55-yard, 11-play march.

LSU placekicker Cade York nailed a 51-yard field goal 5:58 before halftime to expand the margin to 31-0, completing a nine-play, 53-yard possession. York’s three-pointer was the longest by an LSU placekicker in Tiger Stadium since Josh Jasper’s 53-yarder on November 13, 2010, versus UL-Monroe.

The Tigers’ 31-0 halftime lead was the fifth-largest in LSU history in an SEC game since 1947. LSU’s largest halftime leads in SEC play were 34-0 versus Tulane in 1965 and versus Mississippi State in 2004.

LSU safety Grant Delpit intercepted a pass from Aggie quarterback Kellen Mond with 9:17 remaining in the third quarter, giving the Tigers a first down at the Texas A&M 40.

The Tigers capitalized on the opportunity when York hit a 50-yard field goal, increasing the LSU lead to 34-0 at the 7:25 mark of the third period. York became the first kicker in LSU history to convert two field goals of 50 yards or more in a single game.

The Aggies averted the shutout with 4:13 left in the third quarter, driving 75 yards on six plays and scoring on a one-yard dive by running back Isaiah Spiller.

The Tigers responded in a hurry, surging 85 yards in seven plays, with the possession ending in an 18-yard TD aerial from Burrow to Chase. The score was the 44th touchdown pass of the season for Burrow, tying the SEC record set by Missouri’s Drew Lock in 2017.

With a sack by Neil Farrell Jr. on Aggies backup quarterback James Foster, LSU added a safety for the final margin with 3:32 to play.