No One Did It Better Than Bradie James 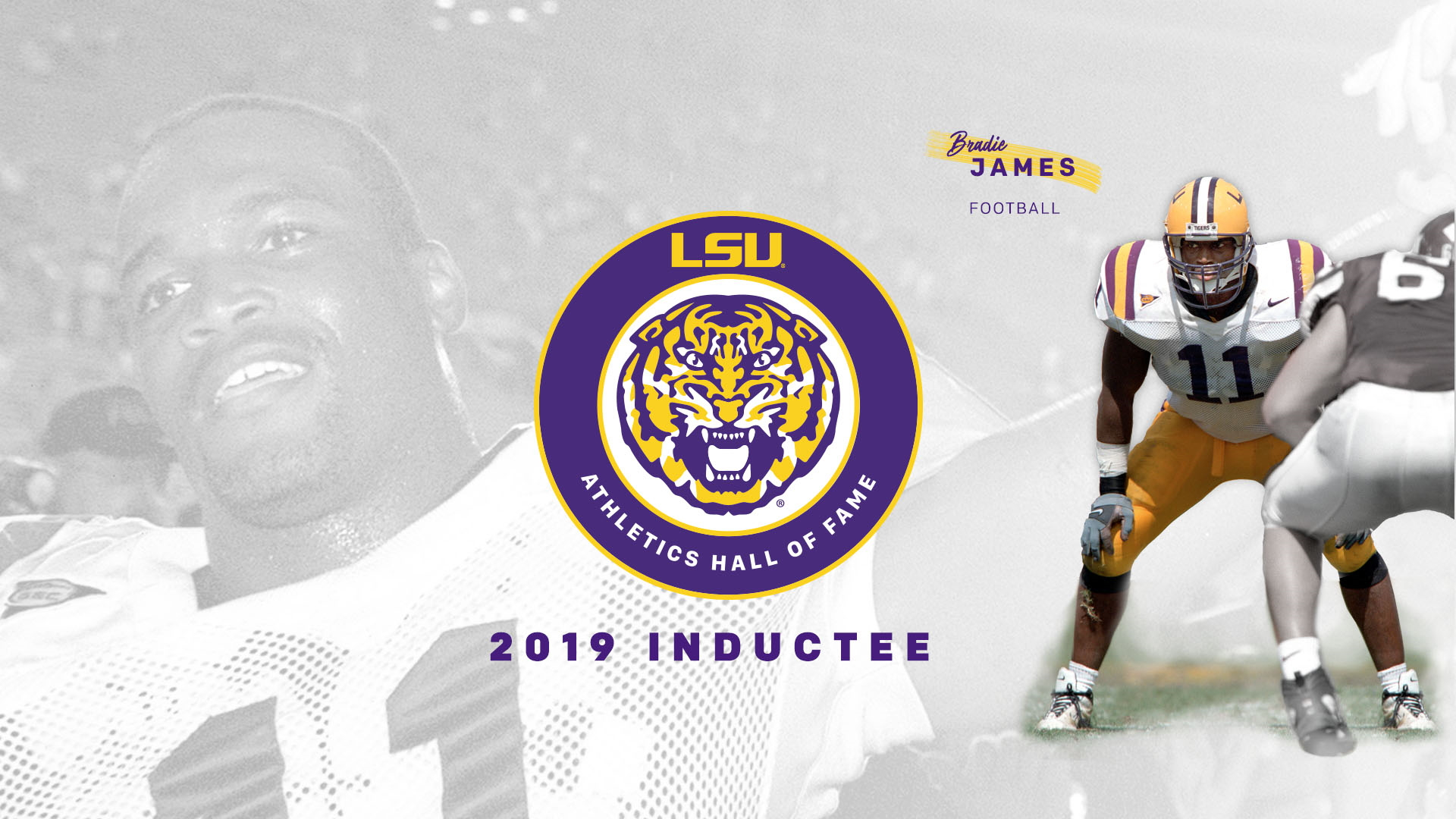 Bradie James has never been one to toot his own horn.

Before he ever played a down of football, James – perhaps the greatest linebacker in LSU football history and the latest Tiger inducted into the LSU Athletics Hall of Fame – played in the school band.

It was the intervention of a stranger that transformed his destiny, steering him toward the Bayou Bengals rather than the Golden Band from Tigerland.

James was right – he could do it, and he did it quite well, for four record-setting seasons at LSU and 10 more in the NFL. Along the way, he overcame tragedy, transformed it into inspiration, and became the standard. He learned to take the temporary and turn it into something lasting. He learned to face death and choose life.

Before he became a football star, James harbored hoop dreams. Growing up in Monroe, his childhood idol was a powerful forward who started his basketball career in Summerfield and finished it in Springfield.

“I did not like football at all,” James recalls. “I thought I was a basketball player. When I was young, we played AAU, and I got the chance to meet the great Karl Malone. And they were calling me the Mailman. So I thought I thought I had a future in basketball, until I got to high school, and the position that I played, I never got any taller. I was about six foot, and they were like, ‘You might need to look at this football stuff.'”

They made the right call. James put down the basketball and the brass instruments, and he picked up the pads, transforming himself into a legend along the way. His 418 tackles rank second in Tiger football history, and the 154 he posted in 2002 on his way to numerous All-American distinctions sit atop the LSU single-season stops chart.

From the day he arrived on campus as a 6-foot-3, 225 pound linebacker with 4.5 40 speed, James looked and acted the part of a future Hall-of-Famer.

In high school, James became one of the most highly-pursued linebackers in the country by his senior season at West Monroe High School.

LSU, of course, was interested, and invited James for his official visit with another blue-chip Louisiana linebacker, Trev Faulk, a star at Lafayette High School. In the era before social media, the two knew of each other, but they had no idea how well they’d hit it off.

“Lafayette to Monroe was a whole lot father back then than it is now,” Faulk says. “We actually figured out later that we had competed in AAU basketball against each other at like 13 or 14. But, LSU set it up to where we went on our official visits at the same time, and we really just clicked. It was kind of like meeting up with a long lost brother. By the end of the visit, we both decided that we were going to go to LSU.”

Before they met, James was leaning toward Tennessee, where New Orleans native Raynoch Thompson was a Butkus finalist and national champion. Faulk, meanwhile, favored Texas A&M.

After they met, both realized they were meant to be Tigers.

“We just had this idea of sticking together,” James says. “The idea was, ‘How about all of us that’s from Louisiana go to the same school?’ If we could do that, we’d have a better chance of being successful.”

It was a program-changing decision. After a 3-8 season as freshmen, the two formed one of the most dominant linebacking tandems in college football for the next two seasons, culminating in an SEC title in 2001. It was a vision Faulk and James talked about on that first recruiting visit, and one they saw come to life over three seasons together, before Faulk departed for the NFL after his junior season.

Among the many memorable plays from his career, two stand out to Marucci and Faulk. The latter remembers a freshman year sack on Georgia quarterback Quincy Carter that showcased James’ other-worldly speed.

“It was like he was shot out of a cannon,” Faulk remembers.

Throwback: Bradie James as a freshman with the sack/fumble/recovery on Quincy Carter. pic.twitter.com/uu8W3A7dsA

Marucci’s memory is also tied to James’ speed: a fake punt he took 29 yards against Alabama in 2002. James, an upback in punt formation, broke into the open field, only to be tripped up by Alabama’s punt returner.

“He didn’t even make a move,” Marucci laughs. “I guess he was a contact seeker, not a contact avoider.”

The Tigers failed to score a point that day. James jokes that he’s bumped into Shaud Williams, the Tide returner who tackled him on the play, in the years since, and the two laugh about the play.

“I should’ve scored,” he says. “I was just trying to get the ball back to the offense. I’ve never lived that one down. If I’d have known the offense wouldn’t do anything and get stopped, I definitely would’ve stiff-armed him and spiked it in the endzone.”

It’s what James overcame off the field, however, that makes his on-field accomplishments all the more remarkable. His father passed away days before the 2000 Peach Bowl. James missed most of the pre-game practices but returned to earn the game’s Defensive MVP honors, tallying six tackles, a sack, and recovering two fumbles.

“The Peach Bowl was definitely a special moment,” James says. “That was a special bonding moment for Nick (Saban) and I. It was the first time we had an understanding.”

Saban, who was in his first season at LSU and didn’t recruit the sophomore linebacker, shared his story with James: he’d also lost his father at a similar age. Saban’s dad dreamed of him becoming a Coca-Cola executive in coal mining country, James recalls, and Saban regretted never sharing his dream of being a coach with his father.

“From that, our relationship was a new creation,” James says. “He allowed me to understand him as a person, so I just went out there and played and got defensive MVP. It was definitely emotional and monumental in my development.”

James’ journey quickly took another tragic turn. Just weeks later, his mother passed away from breast cancer. He stopped eating. He shut down, feeling like he couldn’t relate to anyone. He had no one to call when he needed money, no home to retreat to. Faulk was his buffer from the world, and it wasn’t until Marucci and fellow trainer Shelley Mullenix encouraged him to seek counseling that James broke through his grief.

“That was the first time I was broke and broken,” James says.

His counselor told him a story, about a woman who lost her entire family in a car crash – adopted parents, husband, and infant. This woman felt like James did: she wanted to see her family again.

“You can do that,” the counselor told James. “Or you can choose life.”

James chose life. He found comfort in football. He remembered the lessons his father taught him, about creating the life he wanted for himself and his future family. He vowed to make a difference in his mother’s honor, to put himself in a position to fight breast cancer.

In the process of personal transformation, James became an inspiration.

“Seeing his toughness, seeing how he went about his business, every day, overcoming adversity, overcoming that type of loss, that type of pain,” Faulk says, “my respect and admiration for him just grew more and more. It was inspiring.”

James inspired for two more seasons at LSU, bypassing the NFL Draft after his junior campaign to get his degree – fulfilling a promise he’d made to his parents. He would become an All-American as a senior, while also earning prestigious National Scholar-Athlete distinctions before the Dallas Cowboys selected him in the fourth round of the 2002 Draft.

From there, James embarked on a 10-year playing career, using his platform to establish Foundation 56, his effort at eradicating the disease that killed his mother. To date, the foundation has served 1,283 women and raised $283,466.50.

“He’s the model for a sustainable player in the NFL from LSU,” Marucci says, “but the thing I admire about him is the way he’s doing it after football. We tell all those guys who make it to the NFL: use Bradie James as an example of what to do for life after football. Don’t let the game define you. You can define the game, and what you do after the game can be really impactful.”

Of all he accomplished in both the professional ranks and at LSU, James considers getting his degree as the most rewarding. James recalls, on his official visit as a recruit, seeing All-American Kevin Faulk deep in his homework. This is the best player on the team, James recalls thinking, and he’s doing homework in the locker room.

“I came here to get a degree,” Faulk told James, a message that stayed with him even through his final semester, when he struggled to balance preparing for the draft and finishing his education.

“K-Faulk really changed my perspective on school,” James says. “I thought back to my parents. They wanted me to graduate, I wanted to graduate. I don’t even know how I did it, but that was definitely instrumental in my post-career. I always knew I was going to be an ex-player far longer than I’d be a player, so I thought about football as an experience, not a career.”

What James will say, though, is his story is proof of this truth: wherever we start and whatever obstacles we may face in life, we can overcome them.

“I’m a Louisiana kid, from Monroe, where we used to play king of the hill on a big old dirt mound,” he says. “It can be done.”

It’s true: if James did it, anyone can. But it’s hard to argue anyone could ever do it better than he did.

“He checks off all the boxes,” Faulk says. “For him to be able to overcome what he overcame, being a great person, a great ambassador, someone that you never had to worry about off the field, graduated, represented the school at the highest levels, he checks off every box. I wouldn’t limit it to an LSU football player – he’s the epitome of what you’re looking for in a student-athlete and a person.”