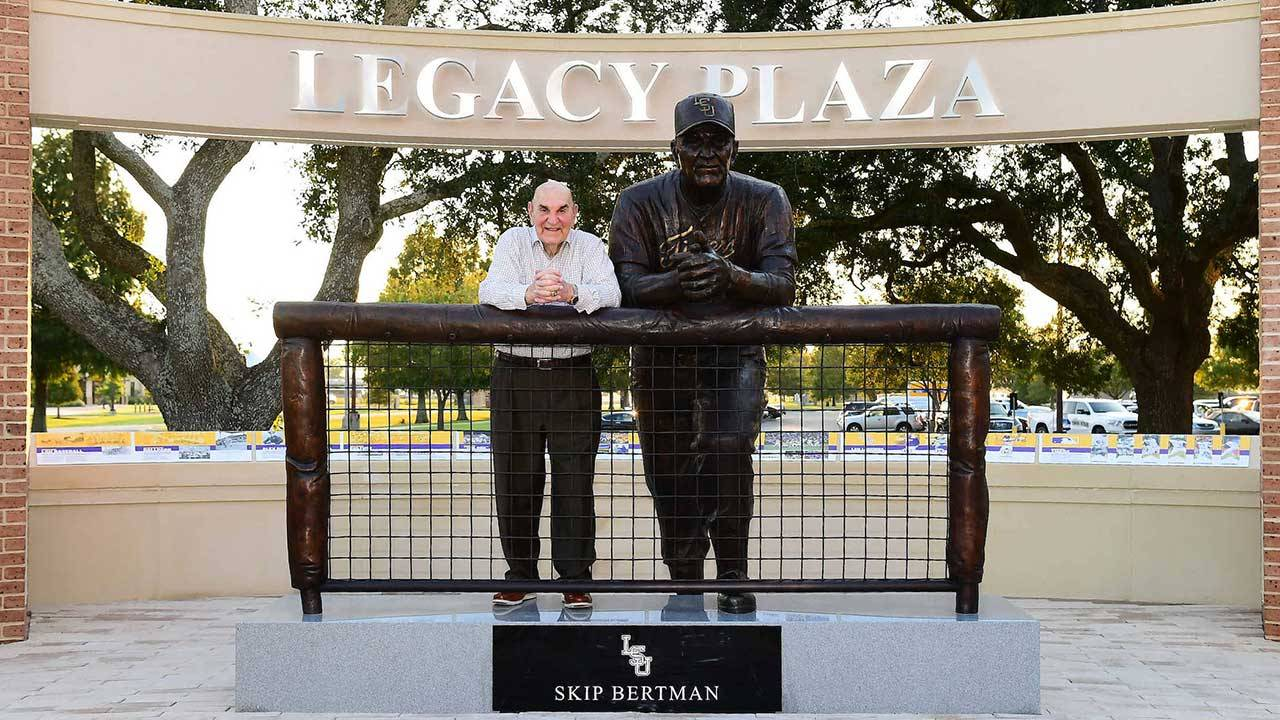 The statue is the centerpiece of the Legacy Plaza, which contains graphics and plaques depicting the rich history of the LSU Baseball program.

The Skip Bertman Statue commemorates the accomplishments of the LSU baseball coach from 1984-2001 who led the Tigers to five National Championships (1991, 1993, 1996, 1997, 2000) and seven Southeastern Conference Championships. He is one of only three coaches in NCAA history to win five baseball national titles.

“This statue and Legacy Plaza are the manifestation of the contributions of so many people,” Bertman said during remarks to the several hundred attendees. “I’m extremely humbled by this honor. It belongs to all of the coaches, players and fans who helped me during my time as LSU’s baseball coach. We had a wonderful home field advantage because of the passion and enthusiasm of the LSU fans, and those fans today still are devoted supporters of our program.

“Most of all, this statue belongs to my family; thanks to my wife of 57 years, Sandy, and my daughters. No coach can be successful unless he has a family that is supporting and giving.”

Bertman finished his 18-season career with a record of 870-330-3 and still holds the mark for highest winning percentage (.724) in SEC annals. The playing surface at Alex Box Stadium was named “Skip Bertman Field” in May 2013.

After retiring from coaching, Bertman served as LSU’s director of athletics from 2001-08, presiding over the Tigers’ football National Championship seasons in 2003 and 2007.

Bertman helped grow interest in the sport of LSU baseball from an average attendance of less than 500 fans per game in 1983 to becoming the annual NCAA attendance leader. The average paid attendance for LSU baseball today is over 10,000 per game, and the Tigers have led the nation in total attendance for 24 straight seasons.

The Skip Bertman Statue and Legacy Plaza were made possible through donations made to the Tiger Athletic Foundation.