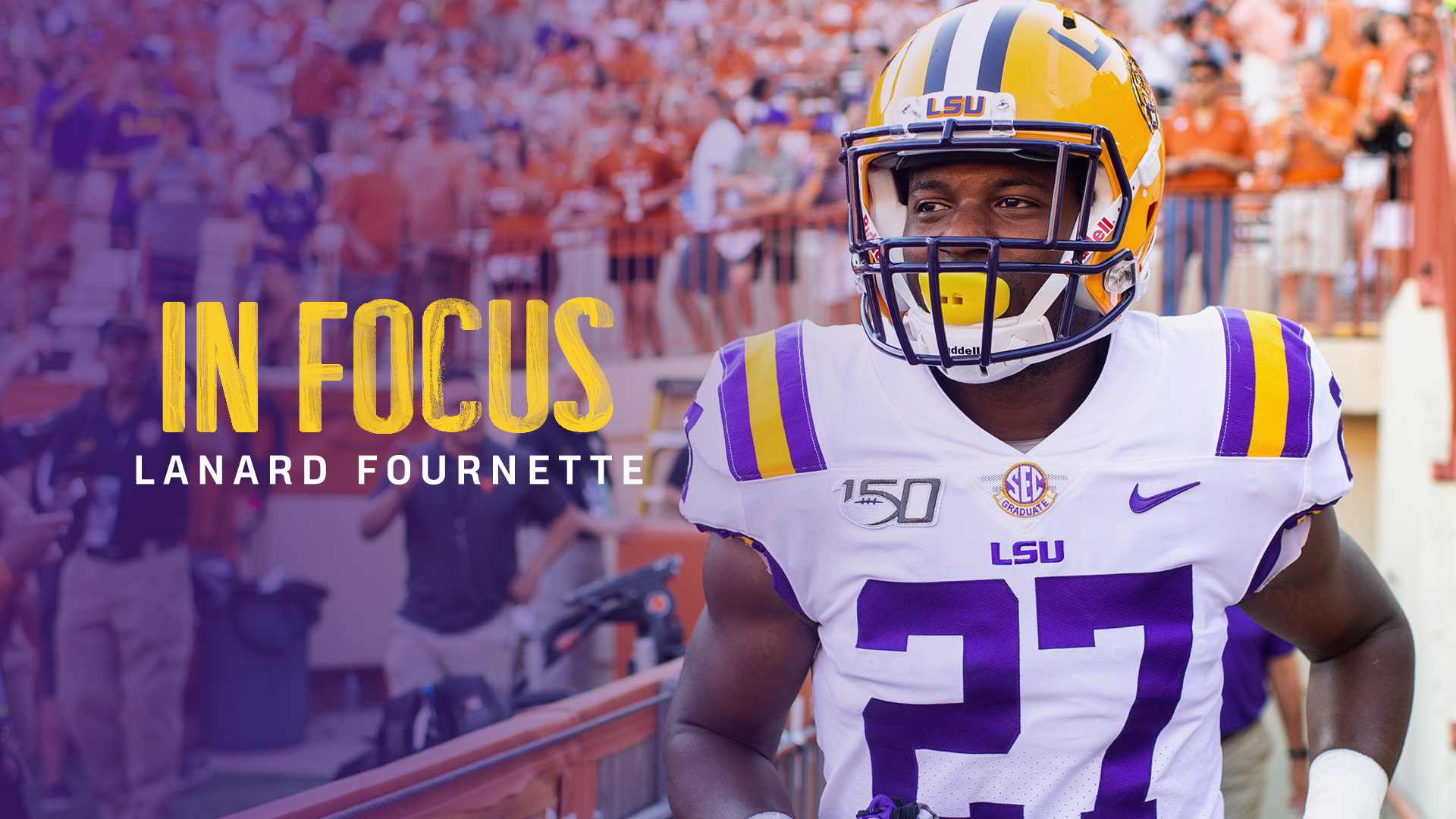 When LSU moved into its newly-renovated, locker room this July, Lanard Fournette had big plans for his nap pod.

Others brought pillows and blankets. Fournette – his teammates call him “Scrill” – brought those, too, but he needed more help getting rest at camp.

So he brought an industrial fan, plugged it in to a nearby outlet, and placed it mere inches from his face, transforming the possibilities of the mid-day power nap.

“He’s sleeping good. Ain’t nothing like that fan,” says senior guard Damien Lewis. “You got that fan on you? You’re going out. Everybody’s got a fan, now.”

The senior running back may have been at the forefront of the fan revolution inside the LSU locker room, napping peacefully in a sea of white noise.

But don’t sleep Fournette. His quiet impact inside LSU’s locker room extends far beyond the reach of his temperature regulation.

Through two games this season, Fournette is the team’s second-leading rusher, picking up 28 yards on the ground in two games and scoring a touchdown. He’s also caught five passes for 19 yards, offering a checkdown option to Joe Burrow in LSU’s new spread offense.

Fournette’s making the most of his opportunity, picking up 29 receiving yards after the catch. His reliability – he’s yet to fumble in his career and has grabbed all five targets thrown his way this season – and experience have him working as the first back off the bench behind Clyde Edwards-Helaire.

LSU’s new spread offense places a premium on the running backs’ ability to run routes, catch passes, and pick up blitzes, and Fournette is a well-rounded back capable of doing all three. It’s a ideal fit of talent and scheme, and one he’s taking advantage of early in his senior season.

“He catches the ball well out of the backfield,” Orgeron says. “He knows his plays. He’s a good runner. He’s a solid, solid running back. He hasn’t had his chance yet, and truthfully, when he plays, he does a pretty good job.”

For evidence, look no further than Fournette’s outings against Rice and Texas A&M last season. Against the Owls, he carried 7 times for 45 yards and his first career touchdown, showcasing his ability to run between the tackles and pick up positive yards. He also caught two passes for 10 yards.

That turned out to be an appetizer for the next week, when he came off the bench in a shootout against A&M to great effect. He caught two passes for 28 yards and picked up another 48 yards on the ground, including a 46-yarder in the fourth quarter. On first and 10 from the LSU 24, Fournette took a handoff from Burrow off left tackle and burst into the Aggie secondary.

All he saw was paydirt, and all that kept him from scoring was a perfect angle from the A&M safety.

“I got touchdown happy,” Fournette laughs. “I was looking at a touchdown before I even got the ball.”

For the world, it was Fournette’s coming out party. For him, it was the realization of his potential, the chance to show what he knew he could do.

“Nothing in that game was surprising to me, except for me playing,” he jokes. “But I wasn’t surprised. I knew what I was going to do. I knew I could perform.”

The game did offer one surprise. After his long dash down the Aggie sideline, Fournette – as humble as any college athlete as you’ll ever meet – flexed his muscles and, yes, talked a little trash.

“When I went out of bounds, I was just so excited,” he says. “I was bowing up, flexing a little bit. I was just in the moment, I guess.”

For Fournette, that’s the exception, not the rule. He prefers to make his impact quietly.

“I’m not a big talker at all,” he says. “I just like to just show up, show everybody what I can do, and any opportunity I get, I try to make the best of it.”

Quiet and consistent. It’s how Fournette likes his fan to blow at nap time, and it’s how he likes to play at game time.